SABARIMALA: Activists of the BJP, Yuva Morcha and other right-wing outfits on Monday stepped up protests across

Meanwhile, Chief Minister Pinarayi Vijayan made it clear that the people who were arrested were not arrested.

“They were not Ayyappa devotees.

The workers were camping at Sannidhanam with a motive to create trouble. The government can not

, “Vijayan said at the State Conference of the Union of Work Journalists (KUWJ).

The day also saw Union minister Alphons Kannanthanam visiting Nilackal, Pamba and Sannidhanam to take stock of the various facilities at the hill shrine, where lakhs of devotees from the country and outside visit every year.

Kannanthanam, who arrived at Nilackal, the base camp, Monday morning said, “The state government turned the temple complex into a war zone. The devotees are not militants, they are pilgrims”.

“Pilgrims are being treated like dacoits. They have imposed Section 144 in a place where people live peacefully.” What was the need to impose Section 144 at Sabarimala? ” he told reporters.

The minister said there was lack of basic facilities at the temple complex, adding the Center had provided 100 crore for putting up various facilities at Sabarimala.

“We gave them 100 crores but they have not spent even rupee,” he said. 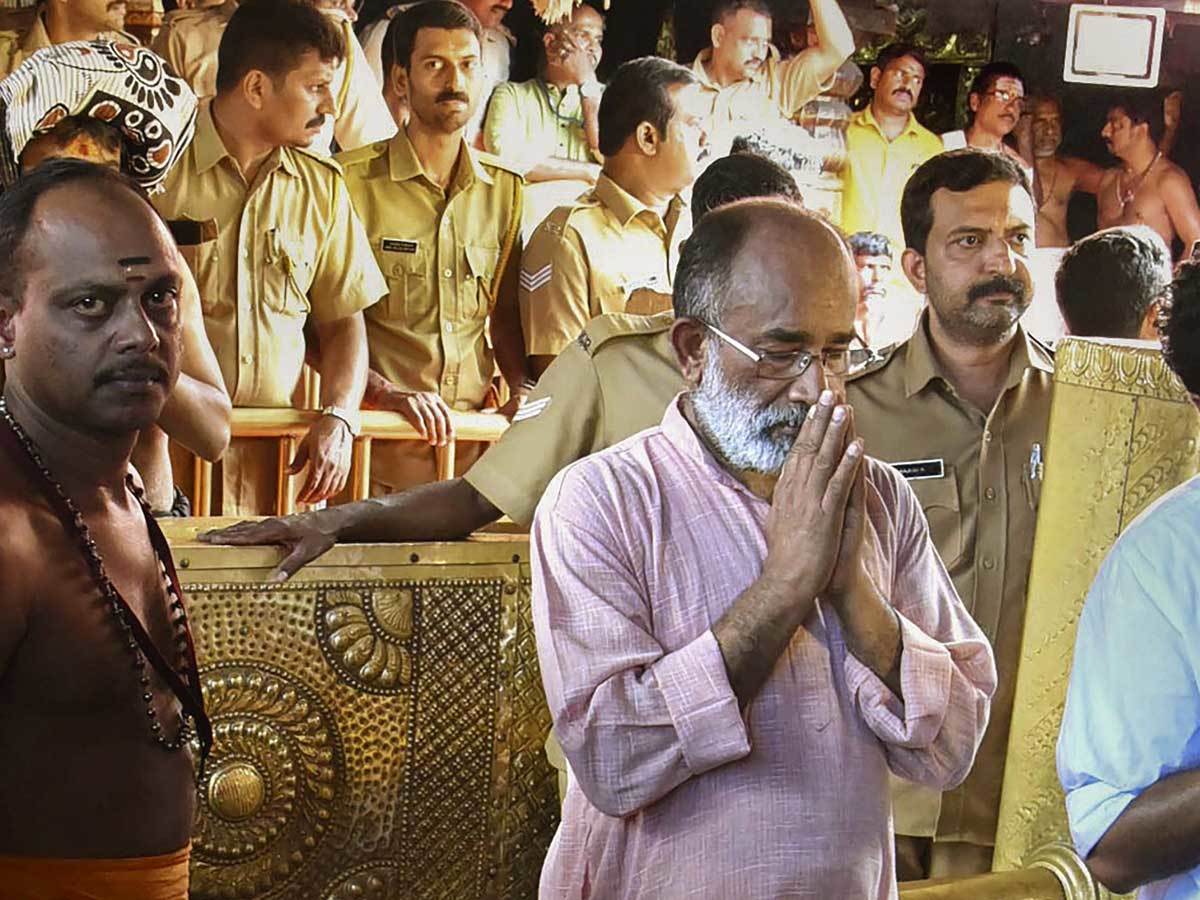 The Union tourism minister’s visit came hours after 100 odd devotees protested late Saturday night by chanting “Nama japam” (chantings in the name of Lord Ayyappa) against the lack of facilities and police restrictions.

Hitting back, Kerala Devaswom Minister Kadakampally Surendran said the Union tourism ministry had in 2016 approved Rs 99.98 crore for spiritual circuit project for the development of Sabarimala, of which only Rs 18 crore was released.

The activists also took part in the state secretariat in Thirvananthapuram.

Leader of the opposition in the state assembly, Ramesh Chennithala slammed the government for the police action, saying the government is trying to “brand” Ayyappa devotees as the Sangh Parivar activists

The details of the detainees are being verified and the arrests have not been recorded yet, they said.

Caught unawares by the showdown on the second day of the pilgrim season, the police officers asked the protestors to disperse. When they refused, the security force took 69 of them in custody early morning, the first such incident witnessed at Sabarimala 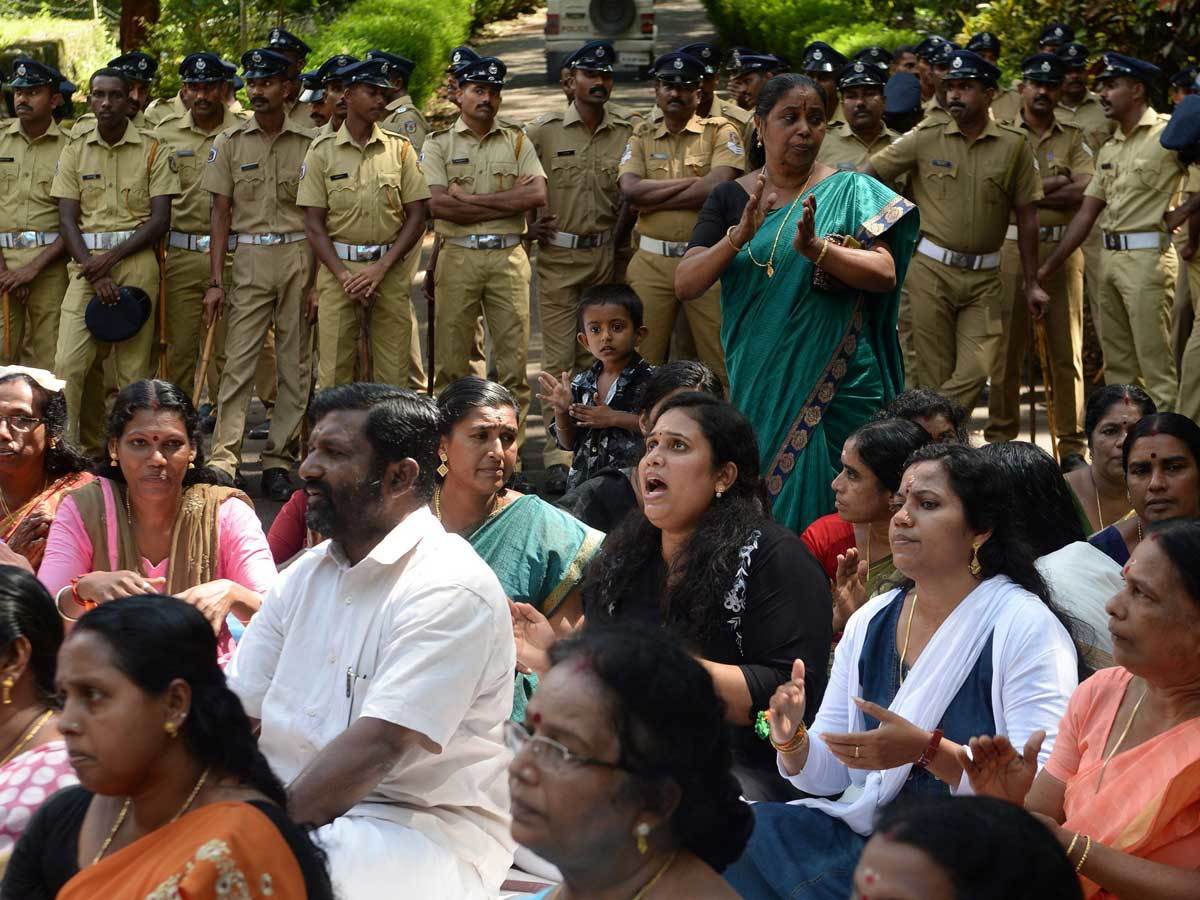 The development led to protests across the state, including in the official residence of the Chief minister in Thiruvananthapuram.

Those taken in custody have been brought to Manniyar Police camp and BJP leaders led by Shobha Surendran is holding “Nama japam” protest in front of the camp, sources said.

In another development, Hindu Aikya Vedi president KP Sasikala, who was at the shrine for the “chorunnu ceremony” (rice feeding) of his grandchildren, was served a notice by Superintendent of Police Yatish Chandra at Nilackal Monday morning, informing her that she could remain at the ‘Sannidhanam’ only for six hours.

Sasikala had taken in custody from near the temple premises two days ago for flouting police regulations and had been released after the magistrate.

A day later, BJP state general secretary K Surendran was arrested from Nilackal after he refused to heed the police plea not to go to the hill shrine at night.

Devotees chanting ‘nama japam’ had gathered at the covered pathway to the temple and had refused to disperse even after the shrine closed at 11pm.

Since prohibitory orders had been imposed, the police informed them that they should leave stay.

The Travancore Devaswom Board (TDB) has

The Board, which manages the hill shrine, has cited lack of basic amenities as other things as the top court from more time seeking reason.

Pilgrims had said that there was lack of adequate toilet facilities, causing immense difficulties especially to women, and rest of the rooms after the floods in August.

The top court had earlier refused to stay in its verdict while agreeing to hear the plea in open court.

By which it had lifted the ban on entry of women in the menstruating age in the Sabarimala temple.

Trump pitches for US to become India's premier defense partner, a day before $ 3 billion copter deals

'Find out the Gandhi in You'

Ajit told me Sharad Pawar knew of his NCP + BJP...