It was the first visit by any foreign delegation since the ruling Hindu nationalist Bharatiya Janata Party (BJP) revoked the region’s special status in August.

Since then, the Muslim-majority population has been under a heavy security crackdown.

The internet has been cut off, while foreign journalists, UN special rapporteurs and US congressional representatives have been barred entry. Phone access is still limited.

As news of the European trip broke, the list of attendees stirred controversy.

Most of the nearly 30 MEPs were from far-right, anti-immigration and eurosceptic parties, including Marine Le Pen’s French National Rally, Alternative for Germany (AfD) and the Brexit Party.

Poland’s ruling Law and Justice party, which is socially conservative, was also represented.

During the short trip, the group took a tour around the main city of Srinagar, which is under curfew, amid reports of clashes.

They also took a boat ride on Dal Lake.

While the state’s former Chief Minister Omar Abdullah reportedly remained under house arrest at a nearby guesthouse, the MEPs met with local traders and students at a high-end hotel.

The trip ended with a press conference in which they commended Indian Prime Minister Narendra Modi’s fight against “the global menace” of terrorism.

It reaffirms a commonality between the European and Indian far right that views Islamic terrorism as a shared global threat.

Eviane Leidig, academic at the Center for Research on Extremism

Indian opposition parties, other MEPs and Kashmiri activists were among those who criticised the trip as a publicity stunt, accusing the BJP government of adding insult to injury.

British MEP Theresa Griffin, a member of the main opposition left-wing Labour Party, wrote on Twitter: “To be absolutely clear – the group of far-right MEPs currently visiting are not in any way an ‘official’ delegation. They do not speak for the European Parliament.”

Despite meeting and being pictured with Prime Minister Modi, the group did not attend in an official capacity.

Fruitful interactions with MPs from the European Parliament. We exchanged views on boosting India-EU ties, the need to come together to fight terrorism and other issues. I spoke about steps being taken by the Government of India to boost ‘Ease of Living.’ https://t.co/7YYocW3AQN pic.twitter.com/9y1ObOvL9e

The “personal” trip was organised by two think tanks – the Delhi-based International Institute for Non-Aligned Studies and the Women’s Economic and Social Think Tank ( WESTT), based in Brussels.

The visit was led by self-proclaimed “investment business broker” Madi Sharma, who recently wrote a column titled: “Why demolishing Article 370 is both a victory and a challenge for Kashmiri women.”

Al Jazeera’s attempts to reach Sharma for comment were unsuccessful.

Analysts say the behind-the-scenes efforts reveal a small part of a much wider apparatus employed by the Modi government as it pursues a Hindu nationalist agenda.

“This was an unofficial visit fostered through non-state interactions,” said Eviane Leidig, an academic at the Center for Research on Extremism in Oslo.

“This is how Hindutva (the Hindu supremacist ideology) operates in India – through a vast apparatus of different organisations, think-tanks and advocacy groups. This decentralised structure allows the government to distance itself from being actively involved in Hindutva mobilisation efforts and divert attention from its involvement.” 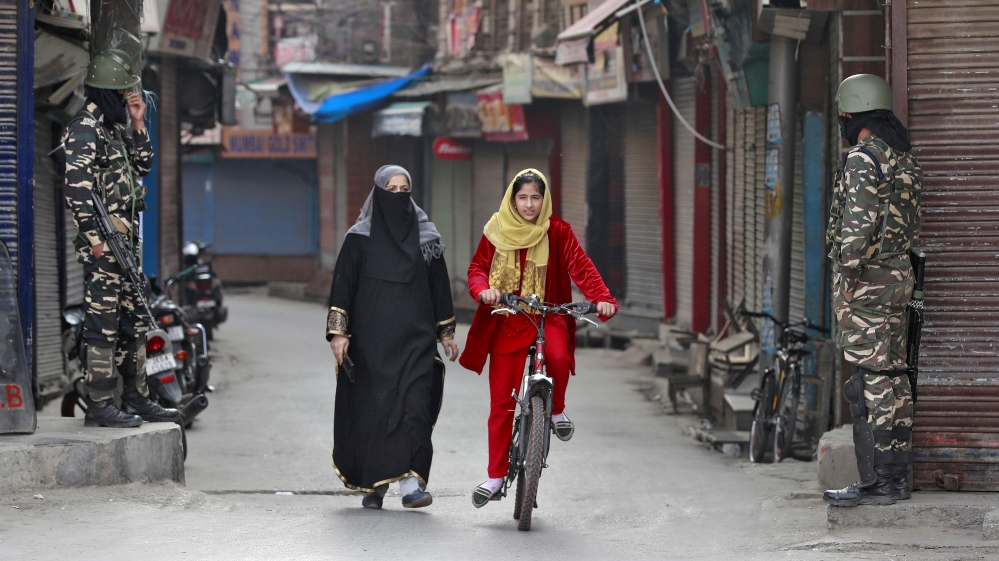 A girl rides her bike past Indian security personnel standing guard in front of closed shops in a street in Srinagar, October 30, 2019 [Danish Ismail/Reuters]

The government of Bashar al-Assad in Syria has received support from far-right groups in Italy, France, Greece and Poland and Iraq’s former president Saddam Hussein and his Ba’ath Party held  meetings with European far-right figures.

“There’s also been far-right support for the Ayatollah in Iran, Hezbollah and Hamas, because there is an authoritarian patriarchal structure that they can identify with and these regimes give them what they are looking for – an authoritarian, conservative approach to foreign affairs.

“Plus there is geo-political opposition to the West,” Alexander Reid Ross, a US-based lecturer and author of Against the Fascist Creep, told Al Jazeera.

Kashmir is on this list of causes, with Brexit Party leader Nigel Farage, Dutch politician Gert Wilders and UK-based far right commentator Katie Hopkins among those who have praised the Modi government’s  recent Kashmir move.

Compared to their support of undemocratic authoritarian regimes, Kashmir and India provide a political context European far-right groups are more familiar with.

Toronto-based academic Aadita Chaudhury has written about white supremacy and its historical links with Hindutva.

She said: “Modi demonstrates to European white nationalists the possibilities and means of implementing authoritarian values and policies within the scope of secular, liberal and multicultural democracies. While culturally Europe and India are very distinct, both places are inherently multicultural and multiracial.

“There is a right-wing and ethnocentric tendency to reduce the complexities of both places to narratives surrounding the loss of a pristine majority that is in decline, culturally, demographically and otherwise, and must be saved. Modi uses this to ‘unite’ ‘Hindu’ India, while right wingers in Europe try to invoke this idea of a peaceful, prosperous ‘white’ past.”

On an ideological and strategic level, analysts say there are a number of reasons why the far right in Europe would see an ally in Modi and his BJP government.

It was a visit to show what their policies look like when they are implemented and how you can get around democratic norms to impose, basically, fascism, and still call yourself a democracy.

Leidig, in Oslo, said: “European right-wing extremists share in common with Modi’s Hindutva an Islamophobic and anti-Muslim narrative. In Europe, it’s especially prominent with anti-Muslim immigrant rhetoric, whereas in India it’s directed against the Muslim-majority in Pakistan and Bangladesh.

“By supporting the Modi government’s actions in Kashmir, it reaffirms a commonality between the European and Indian far right that views Islamic terrorism as a shared global threat. It allows these MEPs to look like they’re strong on defending against Islamic terrorism, which often gets used to promote Islamophobia.”

Anti-Muslim sentiment in India has seen hate crimes rise, with a spate of killings and reports of widespread harassment – abuse which has alarmed the UN.

“Under Modi, there have been lynchings as well as increased institutional oppression,” said Reid Ross. “That excites and inspires the far right because they want the everyday privilege of being an oppressive power.

“Beyond just pushing them off the main stage, there’s also something about shutting off people’s internet access and silencing the opposition. The far right see this method of oppressing the Kashmiri population as particularly useful.”

The invited MEPs pledged to support the Indian government’s fight against “terrorism”, and to take their findings back to the European Parliament.

“Ideas are exchanged at these sorts of events. It wasn’t just about showing that things in Kashmir are ‘normal’,” said Chaudhury, the Toronto-based academic. “It was a visit to show what their policies look like when they are implemented and how you can get around democratic norms to impose, basically, fascism, and still call yourself a democracy.”

Bus carrying U of Washington band rolls onto side on highway

GameStop surges 11% after company says it will sell Spring Mobile...

Brewers inch closer to clinch with rout of Bucs – MLB.com

Flesh-eating bacteria linked to heroin kills 7 in California – The...

Love Island’s Shaughna and Paige are stunned in first look at...

‘Uncertainty ahead’: Where does the vote really leave Brexit?