Funeral services for Honorary Colonel David Hart, Canada’s longest serving military officer and a hero of the 1942 Dieppe raid, will be held Sunday in Montreal. He died Wednesday at 101.

His passing is felt far beyond the walls of the Ste-Catherine Street Armoury in Westmount, Que., where he was the soul of the 34 Signal Regiment, but the void his death leaves behind is perhaps most noticeable there.

Inside the armoury, Col. Hart is immortalized in a painting by Montreal artist Adam Sherriff Scott. The artwork, which hangs on the wall of the mess hall, captures a moment of bravery as the Canadians were driven back by heavy German fire at Dieppe.

His military career was remarkable for many reasons, not least of which was his 81 years of service. But what stands out is his heroic act in the Second World War, which ended up saving hundreds of Canadian lives. 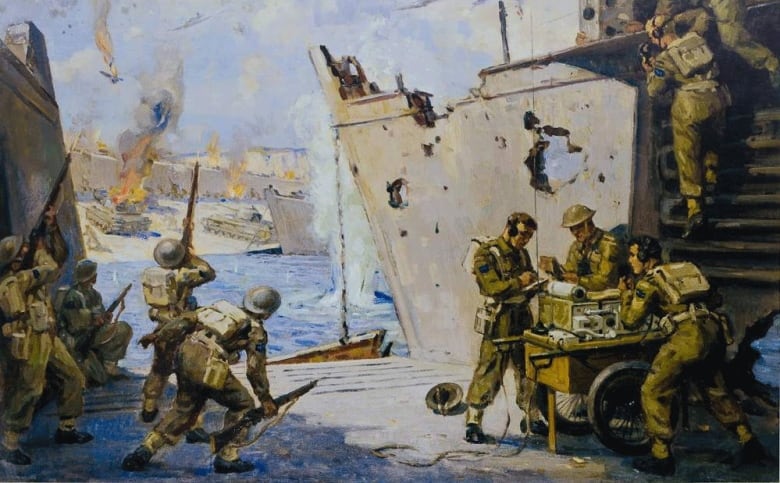 This painting of the Dieppe raid by Montreal artist Adam Sherriff Scott hangs on the wall of the Sainte-Catherine Street Armoury in Westmount. Hart is pictured in the bottom right corner, crouching with the radio. (Courtesy Department of National Defense)

During the bloody Dieppe raid, Hart was a signaller. While heavy shell fire rained down, Hart kept a cool head and stood fast, radioing crucial information between headquarters and the frontline.

Hart once described the moment that he convinced headquarters to let him cut off communication and switch frequencies in order to relay retreat orders to troops on the beach.

“I knew I had a frequency I could contact them with if I could get off the air. Discipline was very rigid those days as far as using radio. I had to ask for permission to get off the air and was told ‘no’ because I was the only communications forward and back,” he said, in an interview with the Canadian army.

“I promised to come back in two minutes and they agreed. I got off the air, got a hold of the two units, gave them the order to come out and was back on the air in 30 seconds.”

For his act of courage, Hart was awarded the Military Medal for bravery. 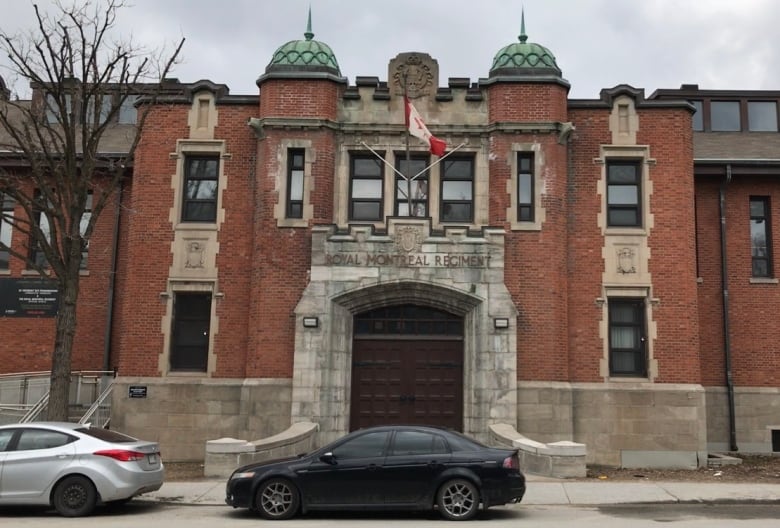 The Royal Montreal Regiment on Sainte-Catherine Street in Montreal, is where Hart would often meet with new recruits and younger members. (CBC)

Despite Hart’s achievements, those who knew him said he was a humble man who rarely spoke about himself.

Stéphane Pierre, who is retired from the military, used to be a member of the same regiment.

Always had time for others

“Col. Hart was a person who always had time for you, from the lowest private all the way to the commanding officer. When he spoke, people listened,” Pierre said.

Pierre said he wasn’t particularly close with Hart, but the colonel still had a profound impact on his career. Hart’s honorary title marks his continued involvement with his regiment.

Without Hart’s support and guidance, Pierre said might have never volunteered to go on tour with the United Nations. 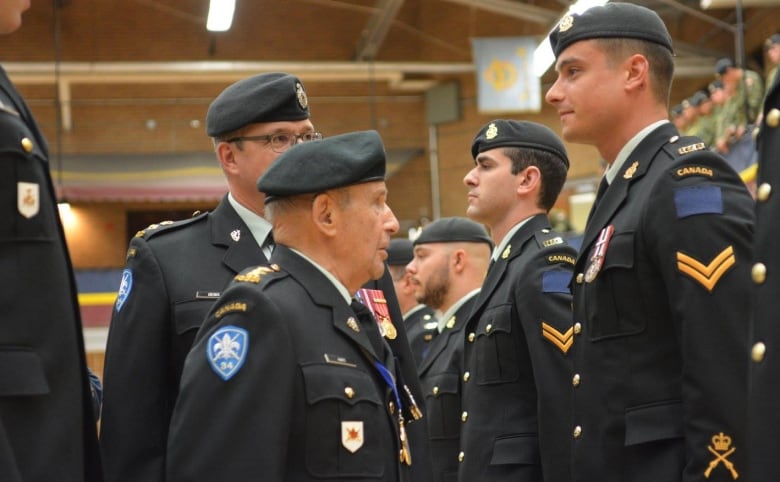 Those who knew him say Col. David Hart might have been a small man, but when he spoke everyone listened. (Courtesy of Capt. Pierre Leblanc/DND)

Hart also touched the life of Chris Weicker, a retired colonel of the armed forces communication and electronics branch.

Weicker said Hart never wanted to be in the limelight, but when he found out that Hart didn’t have his own copy of the painting honouring his bravery at Dieppe, he ordered one as a surprise.

“He was so happy,” Weicker recalled.

“We thought that it was important that he get some recognition, and also have a copy that he can hang on his wall.”

Weicker has a second copy of the painting, which hangs at his home in Victoria, B.C.

“I think of Col. Hart quite often,” Weicker said. 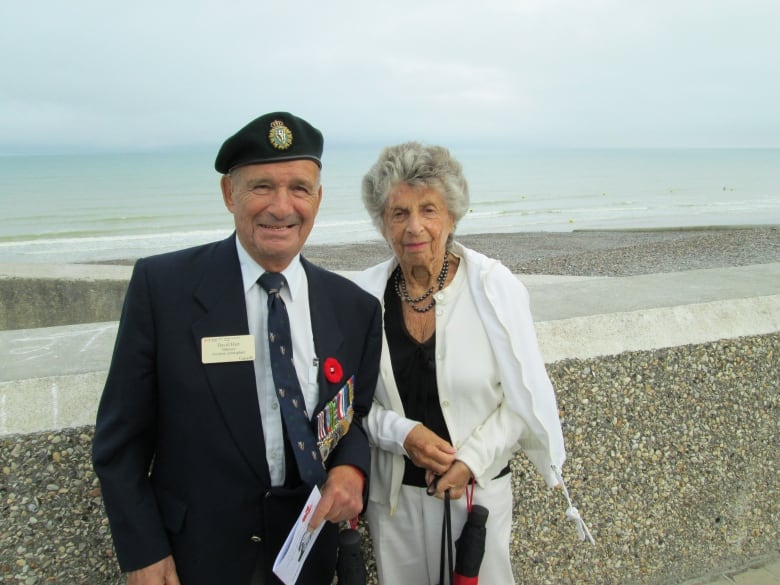 Honorary Col. David Hart returned to Dieppe in 2012 with his wife Miriam and family. The couple walked the beach one last time in 2017 on the 75th anniversary of the raid. (Submitted by Leslie Hart)

On the 75th anniversary of the Dieppe raid in 2017, Hart made the trip to France one last time. He walked the beaches arm in arm with his wife.

Last survivor of his regiment who was at Dieppe

He was the last surviving member of his regiment who had been at Dieppe.

Captain Pierre Leblanc, with the Department of National Defence, said that what made Hart special was not just his accomplishments, but the way he made time for everyone.

“When he entered a room … you could feel his presence,” Leblanc said.

“He was a guy who enjoyed life a lot. He loved dancing. I saw him dancing tango with his wife during mess dinner … He was so in love with his wife after so many years of marriage.”

While his loss leaves a void at the 34th Signal Regiment, those who knew Hart say his legacy will live on through all the lives he’s touched.

Hart, who was one of seven brothers, is survived by his wife Miriam, his son Michael, his daughter Leslie, as well as his brother Eddie, who is 99. 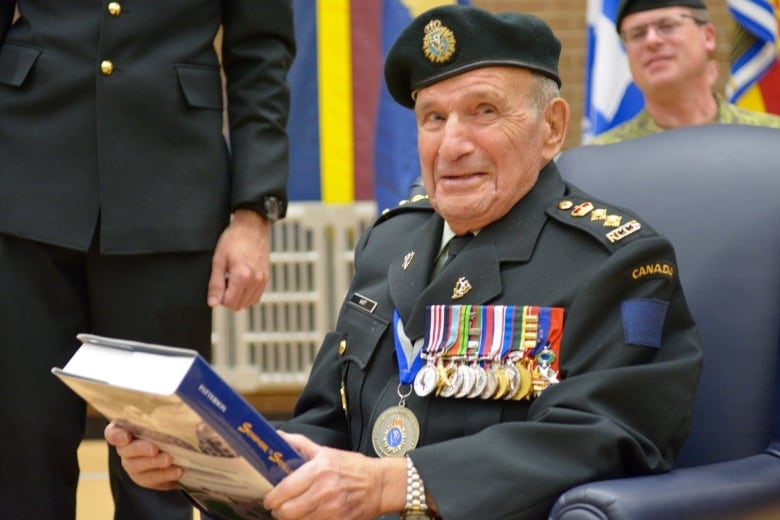 Even in his later years, Col. Hart often took the time to meet with new recruits and younger members of the 34th Signal Regiment in Westmount, Que. (Courtesy of Captain Pierre Leblanc/Department of National Defence)

HBO Max is going to make you quit HBO Now in...

Why Buying Bitcoin (BTC) At Current Levels Is A Recipe For...

‘I love their kids the most’: Muslim community coming to grips...

Here’s what you need to know about 2 wildfires raging in...