Berlin, Germany – More than a thousand people took to the streets in the German capital, expressing their sadness, anger and solidarity following a far-right attack at two shisha bars in Hanau, in which nine people were killed.

Less than 24 hours after Wednesday’s attacks, on Thursday evening, Berliners chanted anti-fascist slogans, as they rallied in Neukolln, an area southeast of the capital and home to large Turkish, Arab and other German minority communities.

Hanau, a commuter town close to Frankfurt nearly 600 kilometres (373 miles) southwest of Berlin, was thrown into a state of shock and mourning as authorities identified the perpetrator as Tobias Rathjen, 43, a man with a “deeply racist mindset”. He killed his mother before shooting himself.

Condemning the violence, German Chancellor Angela Merkel said: “Racism is a poison; hate is a poison. This poison exists in our society, and it’s to blame for too many tragic events.”

A sombre mood could be felt across the capital a day after the attack.

The big news from Germany on Thursday was expected to be the opening of the 70th Berlinale International Film Festival, one of the city’s biggest annual cultural events.

Berlinale festival organisers expressed their sympathy on Twitter: “With great dismay, the Berlinale learned of the fatal attack in Hanau. Our deepest sympathy goes to the victims & their families. We stand for tolerance and hospitality. We oppose violence and racism. At today’s opening, we will commemorate the victims with a minute of silence.”

There is still a big Nazi presence here. As a person affected by right-wing terror, I can’t sleep at night. Many of us are afraid.

Tina Glantz, a feminist activist, rallied in Berlin. She told Al Jazeera it was important to stand with victims of racial crimes.

“I came in solidarity with all the people experiencing racism and violence every day through and within our system,” she said.

“It’s not just the far right – the government, police, secret service and civil society are also based on a racist system. Many people are losing trust in government structures and using people they consider not German as their scapegoats. I came today in resistance and solidarity because times will get harder and we need to stand together.”

The nine victims all had minority backgrounds, including people with Kurdish origins and Turkish citizens.

Gokay Sofuoglu, the federal chairman of Die Turkische Gemeinde in Deutschland (or The Turkish Community in Germany), a prominent organisation in Berlin that works to promote the interests of the country’s large Turkish community, called on authorities to do more to tackle the growing threat of far-right violence.

“The declared goal of right-wing extremist terrorists and their parliamentary arm, the AfD, is to destabilise our democracy and create civil war-like conditions,” he said, referring to the far-right Alternative for Germany party.

“Security authorities need to concentrate fully and permanently on right-wing extremism. People affected by racism, discrimination and racist violence have to feel protected by this country and this constitution. As a first step, we are calling for a parliamentary committee of inquiry to deal with right-wing terrorism and racism.”

For many Berliners, the fact that the attacks took place in shisha bars – popular hangout spots for many young German minorities – was particularly troubling.

In recent years, authorities in the capital have increasingly raided shisha bars in areas like Neukolln in attempts, they say, to crack down on organised criminal gangs. Opposition voices, including some local politicians, have criticised the frequency of the police raids, and say they stigmatise entire communities.

M E, who did not want to give his full name, owns a shisha bar in Neukolln.

He told Al Jazeera that authorities raided his establishment at least twice last year, which made him feel very unsafe. The Hanau attack has underscored his fears.

He said: “During the police raids, armed officers rush in and order all guests to the ground. Everybody is searched and the only thing the officers take are legal tobacco products. The raids do not lead to anything positive, on the contrary, the guests are left feeling angered and insecure.

“I was surprised and disappointed about what happened in Hanau, but I think with many recent negative stories about minorities and Muslims, the local media have normalised such hatred towards shisha bar owners and guests.” 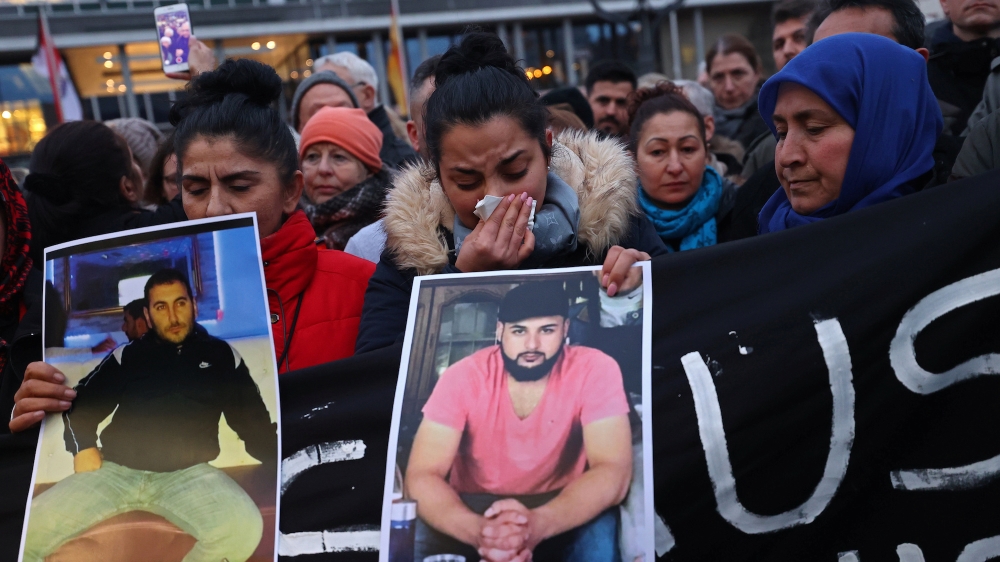 People attend a vigil for the victims of a shooting in Hanau, near Frankfurt, Germany, February 20, 2020 [Kai Pfaffenbach/Reuters]

Vykinta Cybaite, a Lithuanian who works at Masaya shisha bar, in the same area, said: “The shisha bar is presented as a threat by the media, places that are run and visited by foreigners. The raids are a reflection of extreme right-wing opinions, and I worry that soon shisha bars in Berlin will become targets for racist attacks.”

Across the country, concerns are mounting over the rising number of far-right crimes.

Ferat Ali Kocak is an anti-racist activist and vice speaker with the Die Linke political party. Two years ago, Kocak woke up in the middle of the night to find his car set alight, in a suspected far-right attack. The intelligence agency confirmed that neo-Nazi groups were spying on him prior to the arson.

“We were lucky that we survived and only did so because I woke up at three in the morning,” he said. “The perpetrators set the car on fire because they knew the fire would spread. It wasn’t an attempt on my car, it was an attempt on mine and my family’s life.”

He says events in Hanau have deepened an atmosphere of fear and grief.

“I’m also angry that something like this has happened because attacks like this have occurred before. There is still a big Nazi presence here.

“As a person affected by right-wing terror, I can’t sleep at night. And I think many affected people feel the same way. Many of us are afraid.”

Is Michael Gandolfini Qualified to Star in the ‘Sopranos’ Prequel ‘Newark?’...

Pensioner fined £100 for stopping to get petrol at ‘rip-off’ East...