Washington is willing to speak with Iran “with no preconditions”, US Secretary of State Mike Pompeo said on Sunday, but Iran dismissed the offer as wordplay.

“We are prepared to engage in a conversation with no preconditions. We are ready to sit down with them,” Pompeo told a joint news conference in Switzerland with Swiss Foreign Minister Ignazio Cassis.

“The American effort to fundamentally reverse the malign activity of this Islamic Republic, this revolutionary force, is going to continue,” Pompeo added.

Iran’s foreign ministry spokesman Abbas Mousavi responded by saying: “The Islamic Republic of Iran does not pay attention to wordplay and expression of hidden agenda in new forms.”

Meanwhile, Iran’s President Hassan Rouhani presented the offer of talks with no preconditions as a sign of Iran’s strength.

“The enemies sometimes say they have conditions for negotiations with Iran … but in recent weeks they said they have no conditions. They threatened us as if they were a military superpower, but now they say they do not seek a war,” he said.

Rouhani also said it was up to the US to return to the negotiating table and resume compliance with the 2015 nuclear deal with world powers to curb Tehran’s nuclear programme in return to the lifting of sanctions.

“The other side that left the negotiating table and breached a treaty should return to normal state,” he said in comments reported on the government website. 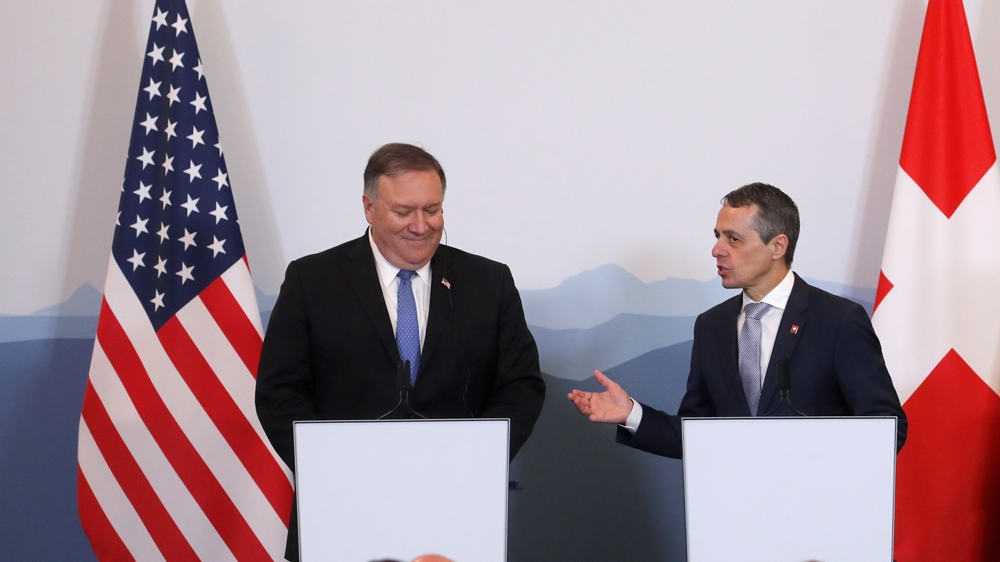 Al Jazeera’s Rosiland Jordan, reporting from Washington DC, said Pompeo’s remarks could not be called a turning point but they showed “the softening of the White House message about Iran”.

“There are people in Trump’s administration who argue that diplomacy should be the first line of defence,” she said.

“Certainly it is significant that Mike Pompeo, who has also been seen as a hardliner on dealing with Iran, would be saying multiple times during the press conference: ‘No preconditions, we are ready to talk’.”

Al Jazeera’s Zein Basravi, reporting from Tehran, said it was still unlikely that the development would result in talks.

“We have been watching both Iran and the United States in the past several weeks and months ratchet up the pressure and then walk back from their very stern and aggressive positions towards each other,” he said.

“So while there does seem to be a noted softening of positions on both sides – they are no longer walking towards the brink of war – the questions that Tehran’s leaders and strategists are asking themselves is what the talks with the United States actually be about. Iran said over and over again that it will not renegotiate a nuclear deal.”

On Saturday, Rouhani suggested Iran may be willing to hold talks if the United States showed its respect.

Rouhani said Tehran would not be “bullied” into negotiations with Washington, the semi-official Fars news agency reported.

“We are for logic and talks if [the other side] sits respectfully at the negotiating table and follows international regulations, not if it issues an order to negotiate,” Fars news agency cited Rouhani as saying.

“We have shown that we do not submit to bullying and covetous powers,” he said.

US National Security Advisor John Bolton said on Thursday Washington would present evidence linking Iran to attacks on oil tankers off the coast of the United Arab Emirates earlier this month.

The alleged evidence would be presented to the United Nations Security Council as early as next week, Bolton said, reiterating earlier claims suggesting that Iran was behind the May 12 attack on four commercial ships in the Gulf.

“I don’t think anybody who is familiar with the situation in the region, whether they have examined the evidence or not, has come to any conclusion other than that these attacks were carried out by Iran or their surrogates,” Bolton told reporters in London.

On Wednesday, Bolton, without offering evidence, alleged the tankers were targeted by “naval mines almost certainly from Iran”.

Tehran rejected the accusation as “ridiculous” and has repeatedly denied any involvement in the incident.

US President Donald Trump, who unilaterally pulled the US out of a landmark deal curbing Iran’s nuclear programme, has tightened sanctions on Tehran, eliminating waivers that had allowed some countries to buy Iranian oil, with the goal of reducing the country’s crude exports to zero.

The US also designated the IRGC a “terrorist organisation” in April.

Last month, Washington deployed bombers and warships to the Middle East, citing “credible threats” from Iran. It did not offer evidence for the claim and Tehran dismissed the move as “psychological warfare”.

The B-52 bombers arrived at a US airbase in Qatar, US Central Command (CENTCOM) said, while the carrier USS Abraham Lincoln was sent to the Arabian Sea.

Coronavirus live updates: WHO worried about cases with no link to...

Despite Reports, R. Kelly Is Not in Solitary – Showbiz Cheat...

An unexpected run-in in Sudan