The US state of Virginia is bracing for a pro-gun rally on Monday that experts and political leaders warn could descend into violence.

The rally, billed by its organisers as a peaceful event to lobby legislators to protect the Second Amendment, is expected to draw dozens of militia groups to the state capital Richmond, according to social media and statements by the groups.

“This includes extremist rhetoric similar to what has been seen before major incidents, such as Charlottesville in 2017,” he tweeted, referring to the Virginia white supremacist rally in which a neo-Nazi rammed his car into a group of anti-racist protesters, killing 32-year-old anti-racist demonstrator Heather Heyer. 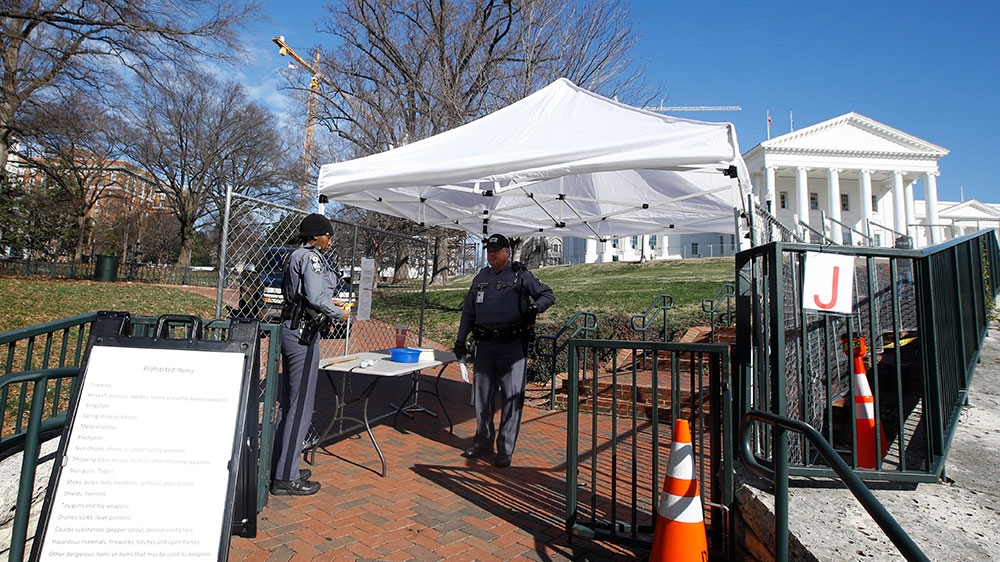 Citing the threats, Northam declared a state of emergency in the state capital that bans all weapons from the Capitol grounds from Friday through Tuesday.

The pro-gun “Lobby Day” is an annual event during which pro-gun groups take to the Virginia Capitol grounds to lobby their state legislators. This year’s event, effectively endorsed by President Donald Trump, comes as the now-Democratic state legislature and governor seek to push through new gun control measures.

Those measures include limits on the purchases off handguns, background checks for firearm transfers and the enabling local governments to ban guns in parks and other public spaces.

The three bills passed the state Senate last week and could be voted on in the House of Delegates as early as this week. Other bills are being considered, including a so-called “red flag” bill, which would allow law enforcement and lawyers to seek emergency orders to confiscate or block the sale of firearms to anyone deemed “a substantial risk of injury to himself or others”. 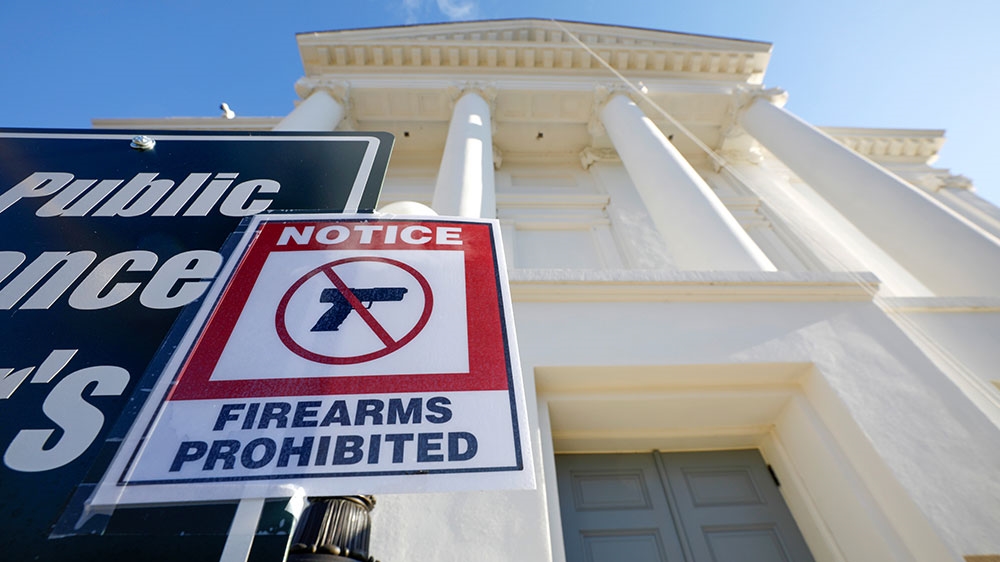 A sign warns visitors not to enter the Virginia State Capitol building with their firearms as security ramps up before a Monday rally by gun rights advocates and militia members in Richmond, Virginia [Jonathan Drake/Reuters]

“The pieces of legislation that we’re offering is to keep guns out of prohibitive hands,” Northam told local media. “It’s very simple. They’re constitutional and they support the Second Amendment.”

But Republicans and gun rights groups say the measures infringe on the right to bear arms.

“Your 2nd Amendment is under very serious attack in the Great Commonwealth of Virginia,” Trump tweeted last week.

The gun control measures have prompted more than 100 local municipalities to designate themselves as “sanctuary” cities in which they say new laws will not be enforced.

Although leaders of the Virginia Citizens Defense League (VCDL), the organisers of Monday’s “Lobby Day” insist the day will be a “peaceful event”, they have welcomed the presence of militia groups.

“We welcome our militia brothers and sisters to be part of making the day a success,” said VCDL president, Philip Van Cleave, who previously said he was proud to be labelled “an extremist”. 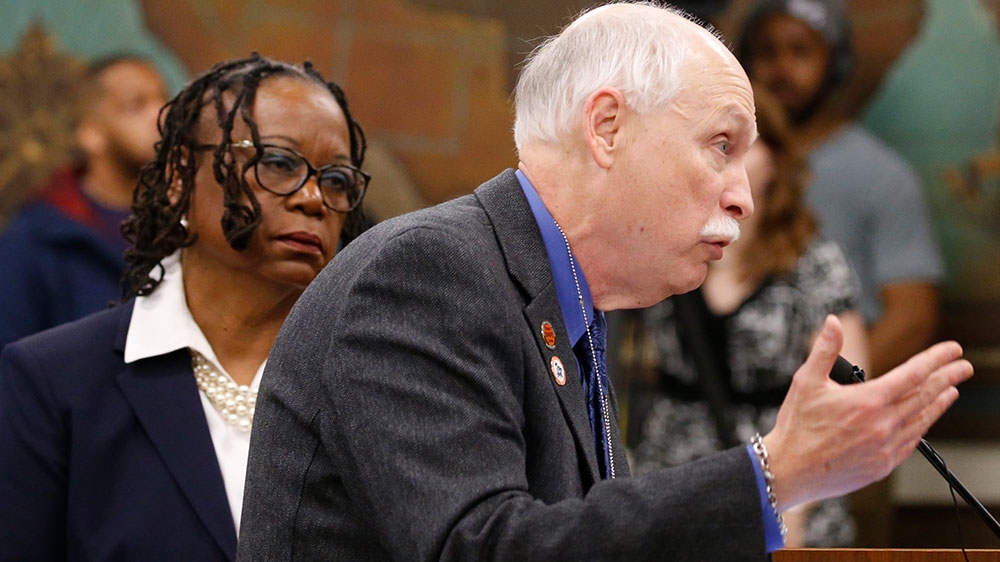 Philip VanCleave gestures during the meeting of the Senate Judiciary Committee at the Capitol in Richmond, Virginia [Steve Helber/AP Photo]

Among the groups expected to attend are the Oath Keepers, which has been labelled an “extremist group” driven by conspiratorial rhetoric by the Southern Poverty Law Center (SPLC) watchdog group.

“We like to see as many members attend this event or see the membership come out and exercise their 1st amendment rights on 2nd amendment issues that is taking place in the state legislature and other unconstitutional laws that the state is trying to pass into law,” the Virginia branch of the Oath Keepers said on its website.

At least 30 other militia groups, including the Virginia Militia and others from outside the state, have also vowed to attend Monday’s event, the SPLC said, prompting fears of a repeat, or worse, of the 2017 Charlottesville rally.

“It can’t go unstated just how fractious of an issue guns are in this country – and that’s across the political spectrum,” said SPLC senior research analyst Howard Graves, who added that tension is heightened within the “extremist movement”.

“It’s something that is really kind of baked into the DNA of American extremists,” Graves told Al Jazeera. 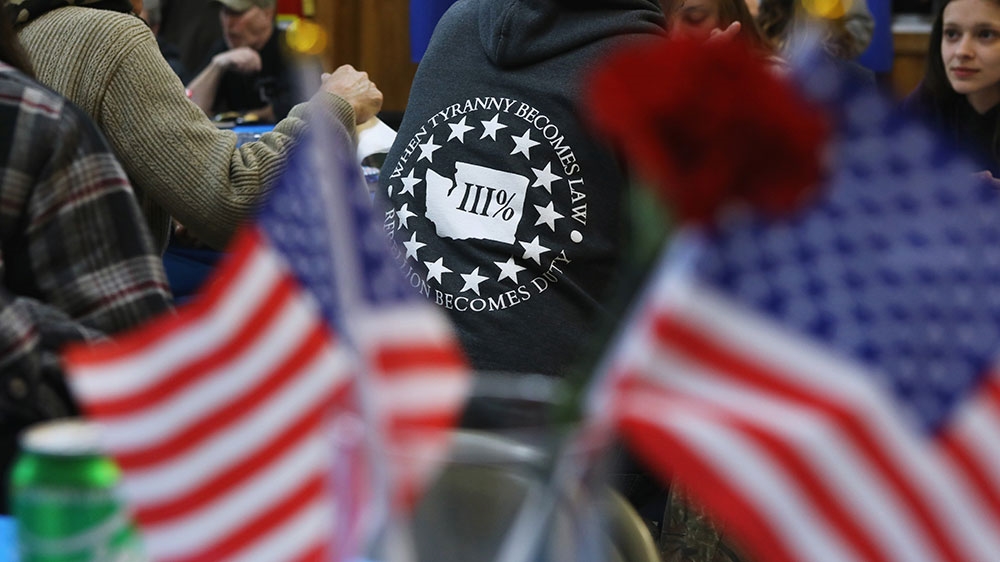 Early on Monday morning, dozens of gun rights advocates and members of militias, began queuing outside the Capitol grounds. According to local media, many were armed, but law enforcement reiterated those carrying weapons would not be allowed on the grounds of Capitol.

Following deadly confrontations in the 1990s – including the 1992 Ruby Ridge standoff in Idaho and the botched siege in Waco, Texas, the following year – the broader militia movement fanned out around the country.

The SPLC documented a surge in the number of militia groups and activity after the election of former President Barack Obama, the country’s first African American president.

Although the number of anti-government groups, including militias, declined in 2018, Graves said the SPLC was surprised “that in the wake of a Republican victory we saw militia groups continue to stay really active”.

“One of the things I think we can attribute this to is this really deep, pervasive sense within the country that sort of manifested itself in a lot of President Trump’s rhetoric during the 2016 campaign about how America had been usurped by foreign invaders, really leading into anti-immigrant rhetoric,” he said.

Trump has made a crackdown on immigration a centrepiece of his presidency and re-election campaign. Following the Charlottesville attack, the president blamed “both sides” for the violence.

Graves added that militia groups tend to explain away the contradiction of their anti-government stance but support of Trump by saying “whatever [he] is doing, he’s best by the swamp and that of the deep state”. 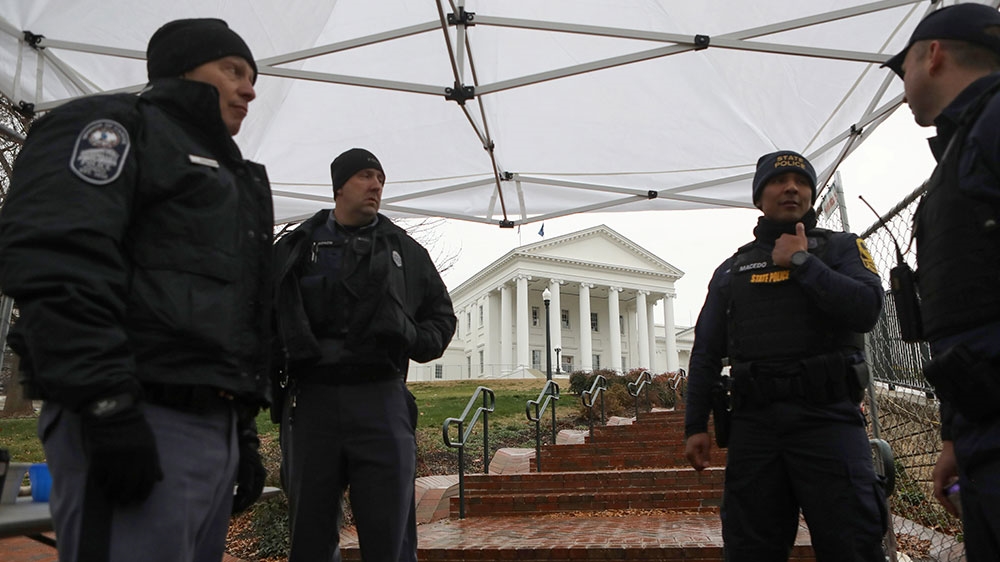 Last week, six men with links to The Base, a neo-Nazi collective, were arrested across three states on charges ranging from conspiring to kill anti-fascists to transporting a firearm and ammunition with intent to commit a felony. Authorities said they believed at least three of the members were headed to Monday’s rally in Virginia, intending to commit violence.

Those threats, along with the trends in the way militia violence often manifest, have led analysts to express concerns about a potentially volatile situation on Monday.

Burley explained that it is hard to predict what exactly will happen in Virginia on Monday, but “weapons bans are the number one thing that’s going to spark [militias] to radical behaviour every single time”.

Faced with the potential of violence, gun control groups cancelled their annual vigil for victims of gun violence.

“It is with a heavy heart that I am announcing the cancellation of the annual Martin Luther King Day Vigil and Day of Advocacy,” said Lori Haas, director of the Coalition to Stop Gun Violence.

“Citizens who represent the overwhelming majority of Virginians are prevented from lobbying their officials because of credible threats to their safety,” Hass said in a statement.

Militia supporters argue that they will exercise their First Amendment rights on Monday, an assertion Haas dismissed. “This is a full-scale rejection of our democratic elections,” she said. “This is mob rule. It is a grave threat to our democracy.”

‘Will get through this’: Aftermath of Thailand’s worst massacre

Original Steve McQueen Bullitt Mustang may sell for a cool $4...

A 15-year-old has been charged in the shooting that left a...

US activist Scott Warren to be retried in aiding migrants case