Univision Communications Inc. is exploring a possible sale, a move that would put an end to 12 years of private-equity ownership marked by an erosion of the Spanish-language broadcaster’s ratings dominance and an ill-fated venture into English-language content.

Univision’s owners have been searching for an exit for years, including oft-delayed attempts to take the company public. During that time, the television industry came under strain as many consumers abandoned cable packages, and a formidable rival emerged in the Spanish-language broadcasting field.

When Univision was bought for $13.7 billion by billionaire Haim Saban’s Saban Capital Group and a consortium of private-equity firms in 2007, it was the uncontested leader in Spanish-language television programming in the U.S. But in recent years, rival Telemundo, a unit of

Univision tried to diversify its audience by buying English-language websites that appeal to younger, bilingual Hispanic-Americans—but that effort proved short-lived and unprofitable. In 2016 it agreed to buy sites owned by Gawker Media Group, including Deadspin, Lifehacker, Gizmodo, Jalopnik, Jezebel and Kotaku, in a bankruptcy auction for $135 million. That followed another deal that year to acquire a stake in Onion Inc., the company behind popular satire sites including its namesake, The Onion.

After taking a $120 million impairment charge on its English-language website portfolio last year, Univision in April agreed to sell its entire roster—then known as Gizmodo Media Group—to private-equity firm Great Hill Partners. Terms of the deal weren’t disclosed, but people familiar with the sale process said they expected Great Hill Partners paid much less than the $135 million Univision spent three years earlier to acquire most of the Gizmodo properties.

Rich Greenfield, an analyst for BTIG Research & Strategy, said Univision might face difficulty finding a buyer for its legacy television business in a media sector dominated by conglomerates such as

that are focused on building digital direct-to-consumer streaming services.

Univision, like other big media companies, has struggled to adapt to a changing media landscape as cable-TV cord-cutting has accelerated, putting pressure on subscription and advertising revenues for cable channels and broadcasters alike.

“While the media industry is huddling together to survive winter as consumer behavior shifts, I cannot fathom why anyone wants or needs to buy Univision today,” Mr. Greenfield said. “In an increasingly global programming world, Univision faces more competition than ever before with the [subscription video] wars just getting started in 2019.” 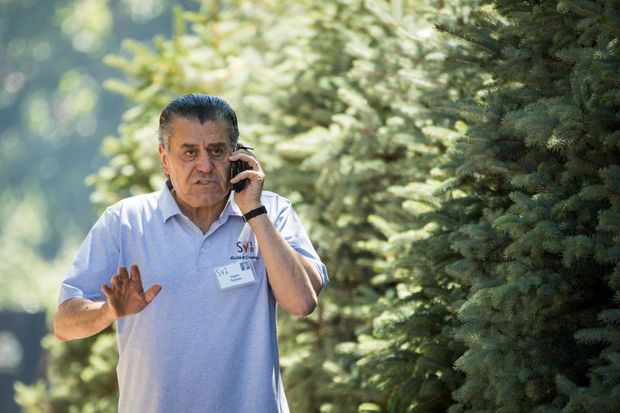 Haim Saban last year. The billionaire’s Saban Capital Group and a group of private-equity funds acquired Univision in 2007, when the broadcaster was the dominant leader in Spanish-language programming in the U.S.


Many of Univision’s would-be acquirers are still digesting recent acquisitions, including many that came with debt. AT&T last year closed an $80-billion-plus deal for Time Warner and is building a streaming service. Disney earlier this year closed a deal for many of the entertainment assets owned by 21st Century Fox for $71.3 billion and is readying its own streaming service, Disney+. Comcast last year gained control of European pay-TV giant Sky with a $38.8 billion bid, and the company’s NBCUniversal unit is developing an advertising-supported streaming service.

The $13.7 billion purchase of Univision in 2007—by a group that included Saban Capital Group, Madison Dearborn Partners, Providence Equity Partners, TPG and Thomas H. Lee Partners—was one of the biggest deals during the leveraged-buyout boom. Private-equity firms often seek to sell out after three to five years, but are usually loath to sell for much less than what they paid.

Univision is one of the few remaining prefinancial-crisis megabuyouts yet to find a resolution. A number of the large leveraged buyouts struck during that period have ended in a bankruptcy filing, including Toys “R” Us Inc. and

Since Univision’s backers began exploring a potential initial public offering of stock in 2015, the wider media industry has come under strain from cord-cutting, which has eroded the value of TV companies. The plans have been postponed.

Univision is still saddled with billions in debt, a consequence of the 2007 leveraged buyout.

The broadcaster said it finished 2018 with $7.4 billion in debt but reduced its total debt by $547 million last year.

After a period of turbulence in Univision’s upper ranks, the company made a number of changes. It brought in media-industry veteran Vincent Sadusky as chief executive last year to succeed Randy Falco.

Since taking over, Mr. Sadusky sought to refocus the company on its core Spanish-speaking audience by selling the portfolio of English-language websites.

Univision’s owners are happy with the company’s current management and have supported its moves to shed noncore assets such as Gizmodo and focus on its roots, according to a person familiar with their thinking. Univision has also achieved some improvements in its TV ratings.

“After a successful year under the leadership of our new management team, including a complete refocus on our core Spanish-language media business, it is abundantly clear that Univision’s strategic value has never been greater,” Univision’s board said in a written statement Wednesday, as it announced the review of strategic options. “The U.S. Hispanic audience represents one of the very few certain growth opportunities in today’s media marketplace, and Univision is ideally positioned.”

Univision said it had hired

& Co. and LionTree as advisers to assist with the process. There can be no assurances as to the timing or outcome of the review, it said.

—Miriam Gottfried contributed to this article.

‘It’s a temporary timeout’: Trump and Xi agree to negotiations, but...

NFL combine 2020 results: Isaiah Simmons speeds ahead of competition as...

Loose Women producers forced to step in as Carol McGiffin and...