Ukrainian officials on Friday barred Russian men of combat age from travelling to the country in the latest escalation of tensions between the neighbours.

The long-simmering conflict bubbled over Sunday when Russian border guards rammed into and opened fired on three Ukrainian vessels near the Crimean Peninsula, which Moscow annexed in 2014. The vessels were trying to pass through the Kerch Strait on their way to the Sea of Azov. The Russians then captured the ships and their 24-member crew.

The Ukrainian parliament on Monday adopted the president’s motion to impose martial law in the country for 30 days in the wake of the standoff. A senior state security official said Kyiv was considering whether to respond in kind with “mirror actions” to the Black Sea incident.

In Moscow, a Russian lawmaker was quoted by RIA news agency as saying Russia had no plans for a reciprocal move to bar Ukrainian men.

Petro Tsygykal, chief of the Ukrainian Border Guard Service, announced at a security meeting on Friday that all Russian males between 16 and 60 will be barred from traveling to the country while martial law is in place.

President Petro Poroshenko told the meeting that the measures are taken “in order to prevent the Russian Federation from forming private armies” on Ukrainian soil.

The announcement follows Thursday’s decision by U.S. President Donald Trump to scrap the much-anticipated meeting with Russian leader Vladimir Putin. Trump said it isn’t appropriate for him to meet with Putin since Russia hasn’t released the Ukrainian seamen. 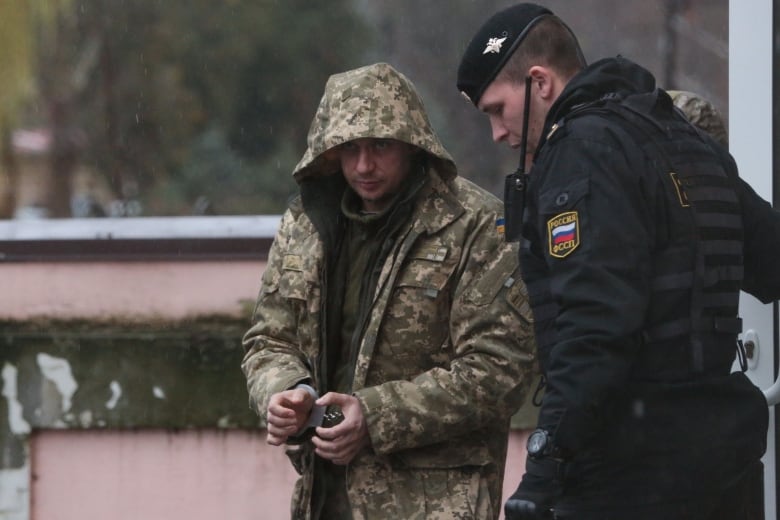 Twenty-one Ukrainian sailors, like the one on the left, remain detained by Russia while their three commanders were taken to Moscow. (STR/AFP/Getty Images)

Russian government-appointed ombudsperson for Crimea told Russian news agencies that all the seamen have been transported from a detention centre in Crimea. The three commanders have been taken to Moscow, she said. It wasn’t immediately clear where the other 21 have been taken.

A Crimea court earlier this week ruled to keep the Ukrainian seamen behind bars for two months pending the investigation.

There has been growing hostility between Ukraine and Russia since Moscow’s annexation of the Crimean Peninsula from Ukraine in 2014. Russia has also supported separatists in Ukraine’s east with clandestine dispatches of troops and weapons. Fighting there has killed at least 10,000 people since 2014 but eased somewhat after a 2015 truce.

Lockdown in Scotland will only be eased on Friday and not...