Heavy fighting continues as Turkey presses ahead with its military operation against Kurdish fighters in  northeast Syria, now in its fifth day.

President Recep Tayyip Erdogan says the offensive aims to remove the Kurdish-led forces from the border area and create a “safe zone” to which millions of Syrian refugees can be returned.

The move came after the United States announced it was withdrawing its troops from the area, leaving the Syrian Democratic Forces (SDF), its main ally in the battle against the Islamic State of Iraq and the Levant (ISIL or ISIS) armed group, without US military support.

Turkey’s defence ministry confirmed the first death among Turkey’s soldiers on Friday, while heavy clashes between Turkish forces and the SDF are under way in Syrian border towns.

Here are the latest updates:

Turkey’s assault has forced 130,000 people to flee their homes, the UN said, adding it was preparing for that figure to more than triple.

“We have moved into a planning scenario where up to 400,000 people could be displaced within and across the affected areas,” Jens Laerke, a spokesman for the UN humanitarian agency OCHA told AFP news agency, adding that these people would be “in need of assistance and protection”.

The UN had on Friday estimated that 100,000 people had fled their homes since the beginning of Turkey’s operation but by Sunday, it warned of displacements from rural areas around Tal Abyad and Ras al-Ain and updated its estimates to figures “surpassing 130,000 people”, although an exact figure was hard to determine.

Most of the displaced had reached relatives or host communities, but growing numbers were arriving at collective shelters.

Suluk is located approximately 10 km (six miles) from the Syrian-Turkish border, to the southeast of Tal Abyad.

Turkish forces targeted areas around two Syrian border towns with fresh shelling, pressing on with their offensive against Kurdish forces for a fifth day.

Gunfire resounded early on Sunday around Ras al-Ain, one of two Syrian towns that are the focus of the attack, while Turkish artillery continued to target the area.

Smoke over Ras al-Ain as Turkey assault goes on

Smoke was seen rising from Ras al-Ain in northeastern Syria after Turkey’s military said it had taken the key border town; Turkey’s most significant gain since its cross-border operation began.

The Turkish Defence Ministry tweeted Friday: “Ras al-Ain’s residential centre has been taken under control through the successful operations in the east of the Euphrates (River).”

The SOHR confirmed that Turkish troops have entered the town, adding that fighting is still ongoing.

Trump says he’s an ‘island of one’ on Syria

President Donald Trump has said he is an “island of one” for removing US forces from northeastern Syria.

He portrayed the Middle East as a hopeless cause, despite years of American military involvement and financial investment.

“It’s less safe now. It’s less secure, less stable and they fight,” he said. “That’s what they do. They fight.”

Trump announced that he had directed $50 million in emergency aid for Syria to support Christians and other religious minorities there.

France said it suspended arms exports to Turkey amid the latter’s ongoing military push into northeastern Syria, which it said threatened European security.

“In expectation of the end of this offensive, France has decided to suspend all plans to export to Turkey weapons that could be used in this offensive. This decision is with immediate effect,” a joint statement from the foreign and defence ministries said.

The statement added that European Union foreign ministers would coordinate their position on Monday at a meeting in Luxembourg. 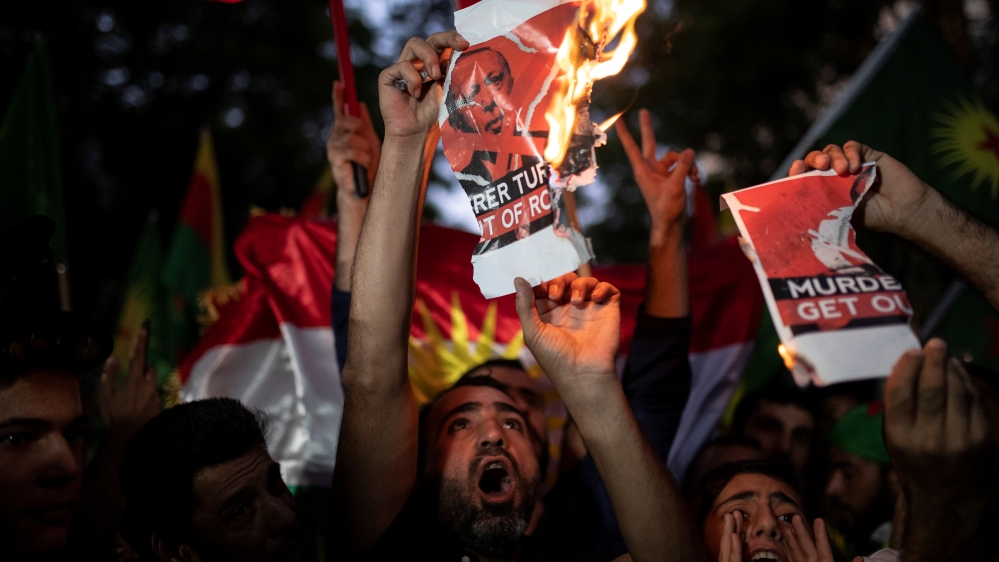 Turkish Foreign Minister Mevlut Cavusoglu dismissed an offer by US President Trump to mediate between Ankara and Kurdish YPG forces to halt Turkey’s incursion in Syria, according to the transcript of an interview with German broadcaster Deutsche Welle.

“We don’t mediate, negotiate with terrorists. The only thing to be done is for these terrorists to lay down arms,” Cavusoglu said. “We tried the political solution in Turkey in the past and we saw what happened.”

The Arab League called for the United Nations Security Council to take measures to force Turkey to halt its military offensive and “immediately” withdraw its forces from Syria.

A communique issued after Saturday’s meeting of Arab foreign ministers also urged the world body to suspend military and intelligence support that could help Turkey’s operation. 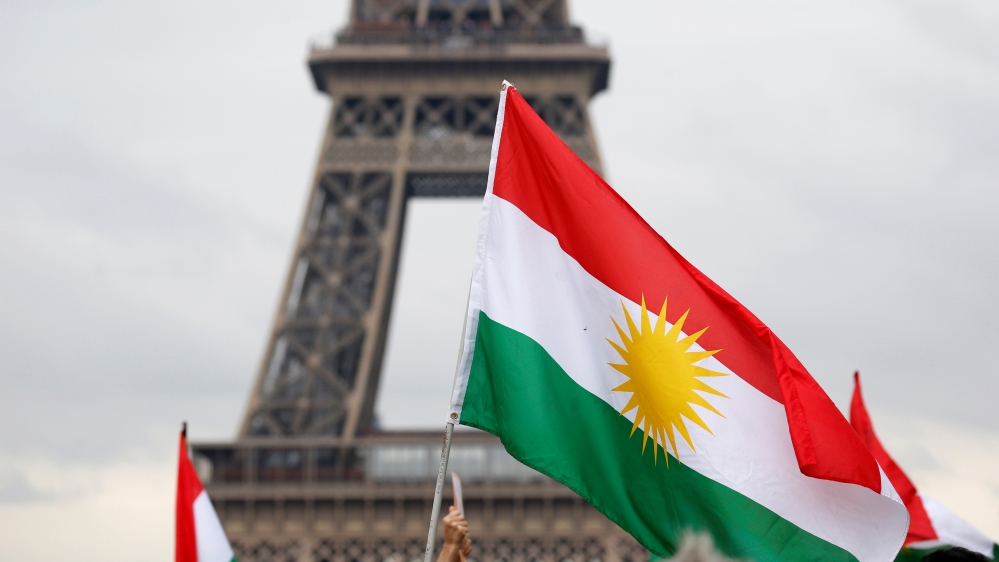 In the French capital, Paris, some warned the offensive could allow ISIL’s resurgence while others criticised Erdogan as well as Trump for his decision to withdraw US forces from Syria.

The SDF warned Turkey’s offensive has revived ISIL and urged allied states that helped fight the armed group to close off airspace to Turkish warplanes.

“The Turkish invasion is no longer threatening the revival of Daesh [ISIL], rather it has revived it and activated its cells in Qamishli and Hassakeh and all the other areas,” SDF official Redur Xelil said in a televised statement, noting car bomb attacks in each of the two cities.

“We are now fighting on two fronts: one front against the Turkish invasion and a front against Daesh,” he said, urging “allies” to carry out their “moral responsibilities” and impose a no-fly zone in northern Syria.

Thousands of people took to the streets in the city of Erbil in Iraq to protest against the Turkish offensive.

Al Jazeera’s Bernard Smith, reporting from Erbil, said there was “little love lost” between the Kurds in the region and the Turkish authorities, adding there was also a “real feeling of betrayal by the Americans” among those demonstrating.

Speaking to Smith, one protester said: “It is a chance for Turkey to dominate us and kill the Kurdish people, the American government has always promised our protection, but now we see no protection.”

Speaking to Al Arabiya, Sky News Arabia and RT Arabic prior to his visit to Saudi Arabia and the United Arab Emirates (UAE), Putin said the Russian army would withdraw from Syria if its government decides so.

“If a future legitimate Syrian government says that they won’t need the presence of the Russian army anymore, it will apply for the Russian Federation as well,” he added.

Russia is one of two main military backers of Syrian President Bashar al-Assad, alongside Iran. 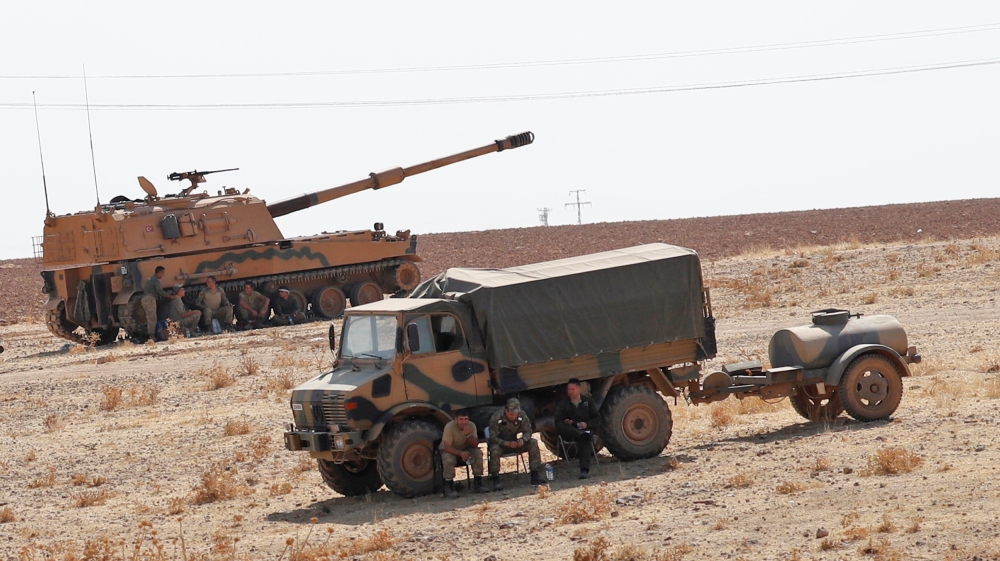 Asayish, the Kurdish police force in northern Syria, said a car bomb exploded outside a prison where suspected ISIL members were being held.

There was no word on casualties and no one claimed responsibility for the incident in the northeastern city of Hassakeh.

In response to Turkey’s operation in Syria, Germany has banned some arms exports to Turkey, according to the German weekly Bild Am Sonntag.

“Against the backdrop of the Turkish military offensive in north-eastern Syria, the Federal Government will not issue any new permits for all military equipment that could be used by Turkey in Syria,” Foreign Minister Heiko Maas was quoted as saying.

Germany exported arms worth 243 million euros ($268m) to Turkey in 2018, accounting for almost one-third of all German weapons exports, according to the paper.

Zarif referred to a 21-year-old security accord that required Damascus to stop harbouring Kurdistan Workers’ Party (PKK) rebels. The PKK has waged a decades-long armed campaign for autonomy in Turkey.

Turkey has said that the decades-old pact was never implemented.

“The Adana Agreement between Turkey and Syria – still valid – can be the better path to achieve security,” Zarif said in a post on Twitter. “Iran can help bring together the Syrian Kurds, the Syrian Govt and Turkey so that the Syrian Army together with Turkey can guard the border,” he added.

The Adana Agreement between Turkey and Syria—still valid—can be the better path to achieve security. #Iran can help bring together the Syrian Kurds, the Syrian Govt, and Turkey so that the Syrian Army together with Turkey can guard the border.

From my interview with @trtworld: pic.twitter.com/q05OFnlpaN

Ahmed Aboul Gheit, secretary-general of the Arab League, called Turkey’s military operation an “invasion of an Arab state’s land and an aggression on its sovereignty”.

Aboul Gheit said the offensive had resulted in a new wave of displacement and jeopardises “achievements” made in fighting ISIL.

Syria’s membership in the 22-member body was suspended in 2011 after the Syrian government’s military crackdown on protesters calling for reforms. 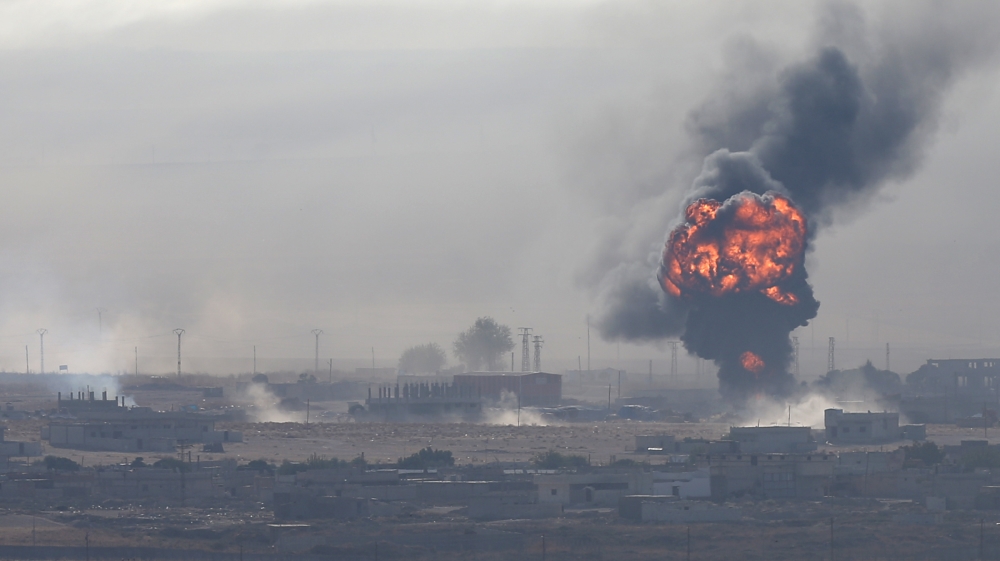 The Turkish defence ministry said its forces seized control of Ras al-Ain, one of the two key border towns at the focus of Ankara’s military offensive in Syria.

“As part of the successful operations being conducted in the framework of Operation Peace Spring, the town of Rasulayn, located east of the Euphrates, has been brought under control,” the ministry said in a post on Twitter.

As part of the successful operations being conducted in the framework of Operation Peace Spring, the town of Rasulayn, located east of the Euphrates, has been brought under control.

However, the SDF denied the report.

Turkey’s military said 14 Syrian villages were “liberated” from “terrorists” as part of its offensive against Kurdish fighters.

Turkish authorities often use the word “neutralised” to imply that fighters either surrendered or were killed or captured. The Kurds disputed the number, saying only 29 of their fighters were dead.

Meanwhile, Turkey’s ministry of defence also said three of its soldiers were killed, while three others were wounded.

France’s Macron calls for end to Turkish assault in Syria

France and the United States agreed to remain in close contact over Turkey’s escalating campaign, French President Emmanuel Macron’s office said, adding that he had stressed the need to try to end the offensive in a phone call with his US counterpart, Donald Trump, late on Friday.

“France and the United States, which share common concerns, will coordinate closely in the coming days,” the Elysee Palace said in a statement.

All eyes in Berlin as world powers set for Libya talks

Simpsons actor Hank Azaria will not voice Apu after controversy

Trump’s wild ride may get even bumpier in 2019

Colin Farrell Is on a Mission to Save a Flying Elephant...

Record number of people murdered in Mexico this year