Tunisia‘s President Kais Saied has given Elyes Fakhfakh, a former tourism and finance minister, the difficult task of assembling the country’s next government.

Fakhfakh, a member of the centre-left Ettakatol party, has a 30-day period to form a coalition government. Failure to win parliamentary approval would force Saied to dissolve the House and call for a fresh election.

The nomination came after the Tunisian Parliament earlier in January rejected a government proposed by Habib Jemli, the previous prime minister-designate who had been nominated for the job by Ennahdha, a moderate Islamist party.

Though the most powerful force in the 217-strong parliament, Ennahdha’s 52 seats meant that it alone could not guarantee Jemli’s inauguration.

Following the voting down of Jemli’s proposed cabinet on January 10, Saied had 10 days to designate a new prime minister, as per Tunisia’s constitution.

The former constitutional law professor, whose mandate as president is limited to foreign affairs and national security, subsequently reached out to a number of political parties to request their recommendations for the premiership.

An engineer by training, 48-year-old Fakhfakh spent part of his professional career working for French energy conglomerate Total, before returning to Tunisia in 2006 where he served as the managing director of an automotive component maker.

For some Tunisians, Fakhfakh’s tenure as finance minister coincided with a period of belt-tightening following the signing of loan agreements with international lenders as part of government efforts to revive the country’s struggling economy.

Translation: I will never forget the day when Fakhafakh welcomed the IMF granting to Tunisia “the biggest loan in the history of our country”. He even had the nerve to add “this agreement reflects the success of the economic and political model of the Troika”.

Nessim Ben Gharbia, a Tunisian columnist, described the designation as “scandalous,” saying Fakhfakh’s performance at the polls was no coincidence.

“The public deficit exploded when he headed the country’s finances; his party has no seat in parliament. It’s no wonder his score at the last presidential election was only 0.34 percent.”

But despite the poor election showing, Ben Gharbia said Fakhfakh enjoyed a reputation for honesty among some political circles – and this likely played a part in Saied’s decision.

“He [Fakhfakh] was openly supported by Attayar,” Ben Gharbia said, referring to the party of Mohamed Abbou, a Tunisian lawyer and human rights advocate who is known for his vociferous opposition to members of Tunisia’s old guard.

“The idea here is that he’s not going to work with Ben Ali era officials, he’ll help fight corruption … He’s young – [all these] are things that ring well with President Saied.” 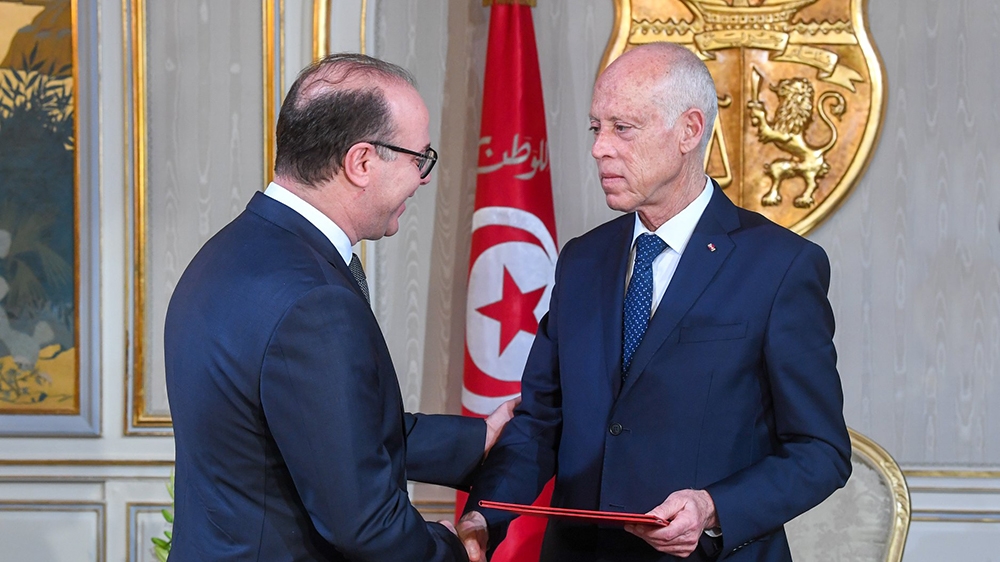 Still, political analyst Mohamed Dhia Hammami argued Tunisians were facing uncertain times ahead – regardless of whether Fakhfakh succeeds in forming a government.

Rejection of Fakhfakh’s proposed cabinet, he said, would lead to new parliamentary elections and an “even more fragmented parliament”, while approval would see the enaction of even more “neo-liberal” policies.

Strict conditions set out by lenders such as the International Monetary Fund, including the local currency’s devaluation and the privatisation of state-owned enterprises, haven taken a heavy toll on many Tunisians.

People’s disillusionment with established parties over the perceived mishandling of the economy saw several political heavyweights lose out in last year’s parliamentary polls, including Ennahdha whose seats in the lower chamber dropped to 52 from 69 in 2014.

Ben Gharbia, the columnist, said the parliament’s dissolution was unlikely.

“They [MPs] are too afraid, so yes, they are going to approve the next administration,” he predicted, saying a different outcome could be politically risky.

Solskjaer reveals what has changed behind the scenes at Manchester United...

Jena Friedman: the outrageous talkshow host women have been waiting for...

Canadian’s appeal in drug case to be heard in Chinese court...

A Recent Discovery Could Shed New Light on Our Understanding of...

Taliban say ‘way too early’ to discuss resuming talks with US

Driven out by drought: Farmland turns barren in Somalia