EAST LANSING — Late in his career, Tom Izzo finds himself on a constant quest to join smaller and smaller fraternities.

He’s currently in a group of 50 college basketball coaches who have won a national title.

Doing that, he said, would validate his 24-year coaching career at Michigan State in his eyes — which matters more than the eyes of any of his critics who point out his one title in seven Final Four appearances. 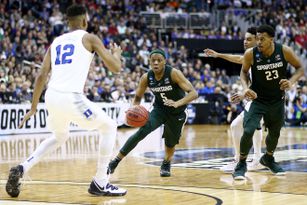 Michigan State got old, then got to the Final Four

The Spartans started two seniors and a junior, a significantly older group than its last two teams

While Izzo has been among the best coaches in NCAA Tournament history at making the Final Four, he’s well aware of the growing talking point in some circles that his teams perform better in the leadup to college basketball’s final weekend than they do in the final weekend itself.

After winning a national title in his fifth year as a head coach and in his second trip to the Final Four, he’s been back to the Final Four five more times. Four of those times, he’s lost in the semifinals. The other time, he lost the 2009 title game to North Carolina in Detroit.

If outsiders want to criticize that record, Izzo said it doesn’t bother him anymore. Posed a hypothetical question about a critic saying he needs a second national title to validate his tenure, Izzo said he would have wanted to fight that critic five years ago. Now, he agrees with him.

“I’ve learned that people that question you are going to question you, the haters are going to hate you,” Izzo said “All I’ve got to make sure I do is what’s best for my team and the university I work at. I want to do that each and every day.”

This Final Four appears to be one of Izzo’s better chances to get that second national title. The Spartans have already eliminated the tournament’s No. 1 overall seed, Duke, en route to the Final Four. According to VegasInsider.com, the Spartans have just slightly worse odds to win the title than Virginia and are favored by three points to beat Texas Tech in a Saturday night national semifinal.

But even if that happens, Izzo says he’ll go looking for a critic who points out that he’d still be three national titles behind Duke’s Mike Krzyzewski.

“Then, I’ll need to find some other friend that says ‘You know, two is good but Mike’s won five, so you haven’t done much yet,” Izzo said. “I’ll thank that person too.”

Westerdam passenger infected with coronavirus: What we know and what we don’t – CNN

Weather warnings over in Metro Vancouver, but more snow expected in...