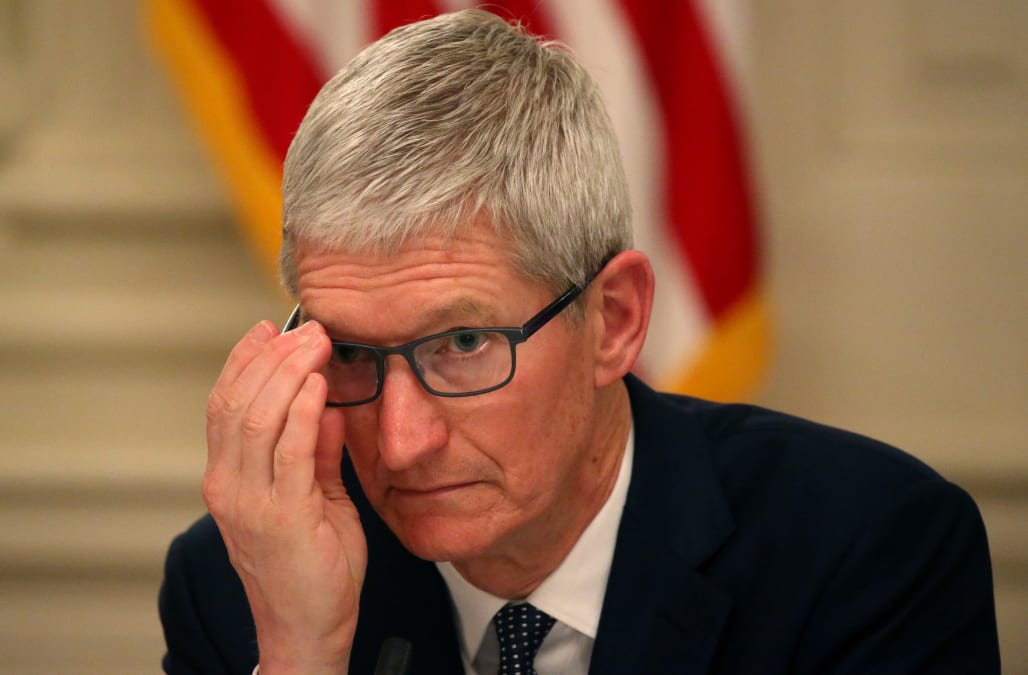 President Donald Trump had an awkward moment on Wednesday when he forgot a name and referred to Apple CEO Tim Cook as “Tim Apple.”

Cook was seated to Trump’s right at a roundtable meeting with business leaders that was co-chaired by Labor Secretary Wilbur Ross and one of the president’s daughters, Ivanka Trump, who is also a White House adviser. Trump referred to her as “honey” during the meeting.

Trump, who once claimed to have “one of the great memories of all time,” has something of a history of flubbing names ― as “The Daily Show” was quick to point out:

Others also chimed in with a mix of amusement and frustration:

How Tim Cook spends his $250M net worth

Tim Cook is worth at least $625.37 million, according to a 2017 estimate by data company Equilar reported by Time.

The bulk of that is from his total stock options and shares in Apple, which total nearly $622 million. Cook is also on the Nike board of directors, where he has $3.4 million in stock options.

Cook’s actual net worth is certainly even higher than that — but information on his property, investment portfolio, and cash on hand isn’t publicly available.

That’s relatively low compared to other tech CEOs. Jeff Bezos, Bill Gates, Mark Zuckerberg, and Larry Page are all worth tens of billions.

Even though Apple is the highest-value company on the planet, there’s only one known Apple-related billionaire: Laurene Powell Jobs, who is Apple cofounder Steve Jobs’ widow.

Cook, who came out as gay in 2014, is not married and has no children. He leads a private, solitary life, but here’s what we know about how he spends his fortune…

Despite being a multi-millionaire, Cook is remarkably frugal. He reportedly buys his underwear at Nordstrom’s semi-annual sale.

“I like to be reminded of where I came from, and putting myself in modest surroundings helps me do that,” Cook said. “Money is not a motivator for me.”

Cook spends most of his time at the office — which includes reportedly waking up at 3:45 a.m. to start reading and responding to emails.

As for travel, Cook has to travel often for work. Apple spent $93,109 last year on Cook’s private plane alone.

But he keeps it domestic when it comes to personal travel, visiting spots like Yosemite National Park.

One of his known vacations was to New York City with his nephew. He showed the tween boy around the New York Stock Exchange in 2016.

Indeed, Cook’s most-known hobby is his love of fitness, hiking, and cycling.

Cook goes to the gym at 5 a.m. every morning — but not the Apple company gym, so he can keep a low profile.

But we do know that Cook likes to spend money on political causes. He’s thrown fundraisers for politicians like Barack Obama and Hillary Clinton.

And Cook plans to give away all of his money to charity when he dies. He has no children of his own, and wants to create a better world for his nephew. “You want to be the pebble in the pond that creates the ripple for change,” he told Fortune in 2015.

More from HuffPost US:

Anderson Cooper rips Ivanka: ‘what does she actually do?’

Roger Stone may have just broken his gag order on Instagram

WWE Leaving Big Match Off Money In The Bank Pay-Per-View –...

One Direction’s Niall Horan hits out at “smug and slippery” Matt...

Tiger Woods gives the people what they came to see at...

‘I really had to pinch myself’ – Kent Online

The 11 restaurants currently for sale in Essex and how much...