A bank employee counts US currency and Chinese currency notes at a bank in Nantong, Jiangsu Province of China.

China’s yuan is being closely watched as its economy slows and as Beijing remains locked in a trade war with the U.S. that has roiled global markets.

The onshore yuan fell to levels not seen since February 2008 on Monday, and the offshore yuan dropped to its weakest since it began trading in the international market around 2010.

The recent escalation in trade tensions left analysts and investors wondering how much further Beijing would allow the currency to weaken.

Here’s a look at how China controls the yuan, also known as the renminbi.

Unlike other major currencies such as the U.S. dollar or the Japanese yen, which have a free floating exchange rate, China maintains strict control of the yuan’s rate on the mainland.

The currency is allowed to trade within a narrow band of 2% above or below the day’s midpoint rate. If it deviates too far, according to some market watchers, the Chinese central bank steps in to buy or sell the yuan, putting a lid on its daily volatility. This exchange rate is known as the onshore yuan, or CNY.

The PBOC, which is heavily influenced by the central government, sets the daily midpoint to provide direction to the market and guide the currency. The tightly managed onshore yuan has weakened about 4% against the dollar so far this month. 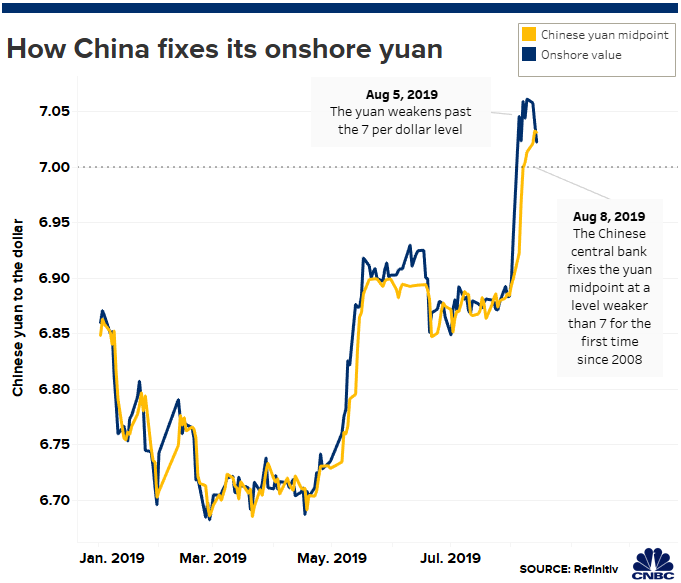 The yuan also trades outside the mainland, mostly in Hong Kong but also in Singapore, London and New York.

Known as the offshore yuan, or CNH, the currency is not as tightly controlled as the onshore yuan. Market supply and demand influence the offshore yuan’s exchange rate, but the volume traded is comparatively smaller.

How the PBOC influences the offshore yuan

The central bank wants to keep the spread between the onshore and offshore yuan narrow since they are technically the same currency, according to experts.

They say that if the offshore rate deviates too far from the onshore figure, the central bank will intervene to dampen volatility and prop up the currency using its vast foreign-exchange reserves, which was more than $3 trillion as of July. The PBOC also relies on state-owned banks to enter the offshore market and swap dollars for yuan.

To prevent the offshore yuan from depreciating too quickly, the Chinese central bank also issues short-term yuan-denominated bills in Hong Kong that essentially mop up liquidity from the market and raise borrowing costs for the yuan, making it more expensive for people to short the renminbi.

If traders are trying to short the yuan, they are predicting its value will weaken against another currency in the future. One way to do that is to borrow in yuan and pay back at a discount as the currency’s value drops.

Is there a new closely-watched onshore level?

China allowed its currency to weaken past a psychologically important level of 7 against the dollar in early August for the first time since the global financial crisis of 2008. That prompted the U.S. Treasury Department to designate Beijing as a currency manipulator. Following that, the PBOC set the yuan midpoint fix at a level beyond 7 for the first time in 11 years on Aug. 8.

The CFETS RMB Index — which measures the yuan against a basket of its peers — also fell below a closely watched level of 92, which it had held for more than two years, Tommy Xie, head of Greater China research at OCBC Bank, told CNBC.

He explained that the market is still trying to find a consensus on the next important level for the onshore currency, and some have suggested it could be 7.20 yuan per dollar.

One Hong Kong-based banker told CNBC that the next closely-watched level could be around 7.25 and depending on the developments of the U.S.-China trade war, it may weaken even more if the levies are further increased.

A weaker currency makes Chinese exports cheaper and more competitive in the international markets, and could potentially offset some of the impact from the tariffs.

Still, it is not likely that Beijing would let the yuan depreciate too fast.

That’s because there is fear that a rapidly weakening yuan may lead to significant capital outflows, where investors move their assets out of a country due to perceived instability and to prevent their wealth from depreciating. There are also concerns about credit markets freezing up and domestic financial conditions tightening, like it did after the yuan fell 2% in 2015. It has taken China years to stabilize its capital outflows since then.

On the economic front, making the yuan more international is a high priority for China, according to some experts.

China sped up its efforts to internationalize the currency after the global financial crisis when Beijing created the so-called dim sum bond market — or yuan-denominated bonds issued outside the mainland — and allowed for cross-border trading of the renminbi.

For its part, Beijing wants to have more pricing power for important commodities, such as oil, and asset prices, like gold. It wants the yuan to become a top reserve currency, much like the U.S. dollar.

The dollar’s status in the global financial market allows the U.S. to borrow with impunity, without dampening investor sentiment toward American assets, the Hong Kong-based banker explained. If the yuan were to become a popular reserve currency, it could allow China to issue more debt to better manage its domestic needs.

However, China is still not willing to lessen restrictions on fears that there will be massive capital outflows as many Chinese investors may move their money outside the country and into the international market.

The yuan joined the International Monetary Fund’s basket of reserve currencies in 2016. China continues to track its value against other currencies in the RMB Index.

But with a trade deal between the U.S. and China looking more and more uncertain, the yuan’s relationship to the dollar remains closely watched by investors and economists.

— Reuters contributed to this report

Chris Brown released after he was arrested for ‘aggravated rape’ in...

US futures point to higher open ahead of Powell’s speech –...

McDonald’s is giving away Big Macs for 99p TODAY – and...