Chuma Okeke doesn’t say much in team huddles, but he delivered one of the last bits of motivation before Auburn tipped off its NCAA Tournament run.

Of course everyone laughed because that’s what everyone does when Chuma says anything.

Chuma wasn’t joking, though. This was serious, he thought. This was important. That’s why he saved it for right before Auburn’s first-round game against New Mexico State.

The NCAA Tournament Selection Committee slapped Auburn with a dreaded five seed, which means there were plenty of people around the country who picked Auburn to go out of the tournament on the first day. It was a bad matchup for the Tigers. Auburn also had to travel to Salt Lake City for the first two rounds, which means they were playing at elevation against a team accustomed to it. In addition to that, the tip off time (11:30 a.m. local) favored the lower-seeded Aggies.

Chuma just knew he had the perfect words to tip the scales of intangibility in Auburn’s favor, though. Motivation is a powerful thing, and Chuma had the silver bullet.

“Obama picked us to lose this game,” he said with all the seriousness of a pre-war speech.

Chuma’s teammates looked up at each other inside the huddle and paused. Anfernee McLemore couldn’t keep a straight face.

“We were just laughing,” McLemore said, “but we were also like, ‘OK, we’ve just got to prove him wrong. We’ve got to break his bracket already.’” 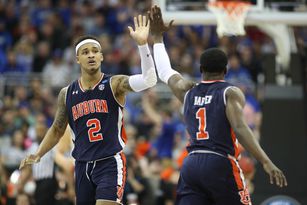 Bryce Brown and Jared Harper have gone from under-recruited guards out of the Atlanta area to the cornerstones of Auburn’s run to its first-ever Final Four, making their case to be considered as the nation’s premier backcourt.

Auburn has been busting brackets ever since, and having fun at every opportunity. The Tigers are now in the Final Four for the first time in program history, and play one-seed Virginia here in Minneapolis on Saturday (tipoff 5:09 p.m. CT). In a state where championship-level college football is expected every single year, this run by the Auburn basketball team has been an enjoyable reminder that success should be appreciated every step of the way.

Alabama has made the final four in college football every season, but those incredible successes haven’t come close to matching the type of energy surrounding Auburn’s unlikely glory in this NCAA Tournament. Most recently, Alabama’s athletic department implemented a loyalty-points system to encourage students to attend regular-season football games, and then stay until the end if they go.

The price of success shouldn’t be apathy.

Alabama played in the College Football Playoff championship game last year, but no one remembers the amazing victory in the Orange Bowl against the best player in the country (Oklahoma quarterback Kyler Murray), or the once-in-a-lifetime circumstances of the SEC championship game. This entire offseason, the focus has been about Alabama’s blowout loss in the championship game.

Shouldn’t Alabama just be happy they’re there every year?

Some people will find that question offensive. Alabama is supposed to be there every year, they’ll say. No, they’re not.

The pressure is somehow worse for Auburn football. Will anything make Auburn football fans happy this season? They want to fire the coach every year if he doesn’t win 10 games. It has created a toxic atmosphere that directly affects the success of the team. Meanwhile, the basketball team has thrived in the underdog role.

I’m not saying the state’s football teams should lower their standards, but the appreciation for this Auburn basketball team’s incredible winning streak has been refreshing and provided some much-needed perspective. It has given fans one memorable experience after another.

First, there was the 20-point victory against Tennessee in the SEC Tournament championship game. Seeded fifth, Auburn was an afterthought going into the tournament. The league crown helped inspire one Auburn fan’s creation of the parody song “We’ve Got Jared,” which has now become the quirky team anthem during Auburn’s NCAA Tournament run.

After the victory against Kansas, Auburn guard Samir Doughty delivered the phrase, “Why not us?” It’s now on T-shirts, and has come to define Auburn’s collective team spirit.

“Do it for Chuma” became the rallying cry after the victory against North Carolina. Chuma, of course, injured his left knee during the game. Auburn used the loss of their best player as motivation, and Chuma rolled into Kansas City’s Sprint Center in a wheelchair just after halftime against Kentucky.

His teammates swarmed Chuma after the come-from-behind victory in overtime, and Auburn coach Bruce Pearl gave his injured player one of the game’s nets as a keepsake. 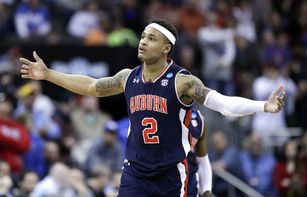 Virginia assistant coach Brad Soderberg was in charge of scouting Auburn in the Final Four.

What a journey it has been since that first victory back in Salt Lake City against New Mexico State. Looking back, that post-game celebration was the funniest of all. It took an opposing player missing two free throws with 1.1 seconds left for Auburn to avoid losing. Afterwards, there was plenty of levity to go around.

“We were just like, ‘Thanks, Obama,’” McLemore said with a smile.

Joseph Goodman is a columnist for the Alabama Media Group. He’s on Twitter @JoeGoodmanJr.

Payton Pritchard, Will Richardson power No. 17 Oregon Ducks in drubbing of Utah – OregonLive

Plot of ‘Star Wars’ Is Different on Disney+ – Showbiz Cheat...

Ex-Google employee calls out culture of sexual misbehavior that started ‘at...

UNICEF says two million children out of school in Yemen

Essential Debuts Phone, Just Cut in Half and With a Creepy...