A Tesla Cybertruck prototype was used to shuttle players into a gaming competition today, and we got a good look at the “upper laser blade lights” which will come standard on the truck, as CEO Elon Musk announced yesterday.

In addition, the truck showed up with headlights looking more like they did at the unveiling – a full line of LEDs across the front of the truck.  We wonder if this means that the headlights might be configurable with a more “standard” arrangement for driving on public roads and a full-array setting for off-roading (or, in this case, marketing exercises).

This is the first time we’ve seen the Cybertruck out in public without Musk in it.  It appeared in a music video once, but that was filmed at Tesla’s design center in Hawthorne (where the Cybertruck makes its home) and the it only appeared parked in that video.

The esports competition in question is called “WePlay! Mad Moon,” a Dota 2 game competition.  Dota 2 is a popular free-to-play MOBA (Multiplayer Online Battle Arena) which started as a mod for Warcraft III and then spun off to become its own game.

The Cybertruck was used to shuttle players from backstage.  It only moved, well, 25 feet or so.  Not a huge task, and it didn’t break any speed records in the process.  Then esports team Virtus.pro (who apparently formerly had a partnership with Mercedes) stepped out.

The full video can be seen in this Twitch clip, from WePlayEsport_EN’s twitch channel earlier today.

The commentators did say that Elon Musk was driving the truck, but given the tinted windows and lack of visual evidence, we strongly suspect it was someone else.

The Cybertruck’s “upper laser blade lights” showed here, for the first time since Musk announced they would be standard.  Upper lights like these are a common aftermarket addition for trucks, particularly for off-roading, camping or working, because they allow for much better visibility and light coverage.

We’ve seen the laser blade lights before on the Cybertruck at the unveiling event, where they were turned on during the test ride portion of the event.  But we didn’t have a name at the time, and didn’t know they were standard.

The prototype also showed up with the same front headlight bar that we saw at the unveiling.  But in public sightings since then, the headlights have seemed different – stronger on the sides of the truck than in the middle. 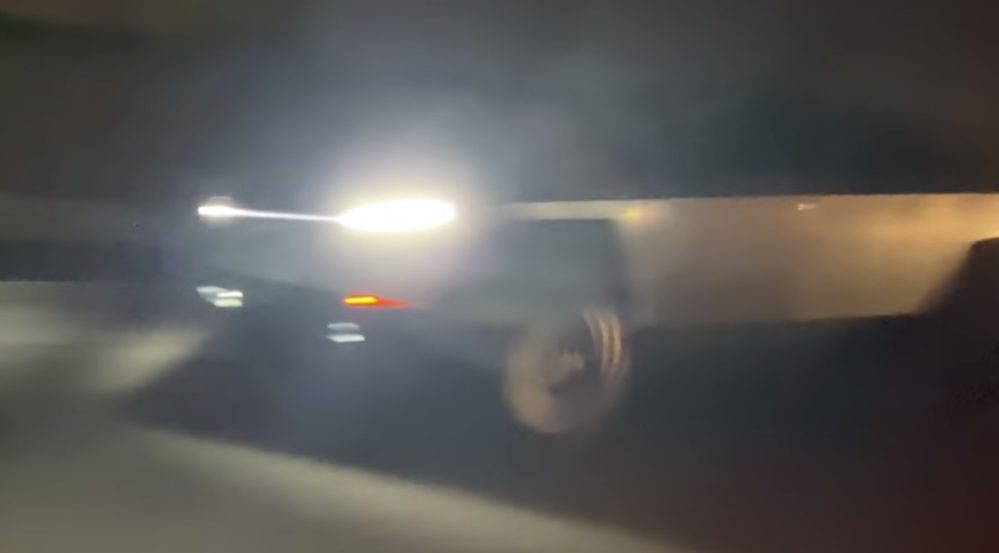 It’s possible there may be a setting to light up the front light bar in a more “standard” headlight fashion to meet road regulations, or to utilize the full light bar for better visibility when camping or off-roading.  That would explain why we’ve seen different light configurations.  That said, Tesla does have more than one prototype – a driving one which was used for test rides at the unveiling, and one which stayed on the stage.  This prototype looks like the latter, with what seems to be a less-functional drivetrain, but has a few visual differences from what we saw at the event.

As for the esports event, this is another example of Tesla’s nontraditional marketing strategy.  Instead of purchasing traditional mass media advertising, Tesla seems to prefer focusing on “fun” stunts like this, showing up in the aforementioned music video, or sending a car to space.

In keeping with that “fun” image, there have been lots of connections between Tesla and video games in the past.

Tesla CEO Elon Musk is an avid gamer.  One of his first projects was a video game called Blastar, and he routinely talks about games on twitter.  Tesla includes several video games in their in-car infotainment system, including popular indie games Stardew Valley and Cuphead.

Tesla vehicles have appeared in video games before as well.  In Grand Theft Auto 5, one of the fastest cars available in the base game was the Voltic Coil, which was based off of the original Tesla Roadster.

The Roadster and Model S also appear in Gran Turismo and Forza Motorsport racing simulator games.  Tesla even came up with a unique concept car for Gran Turismo 6’s “Vision Gran Turismo” series of cars, but the car never ended up showing up in-game, only a sketch: 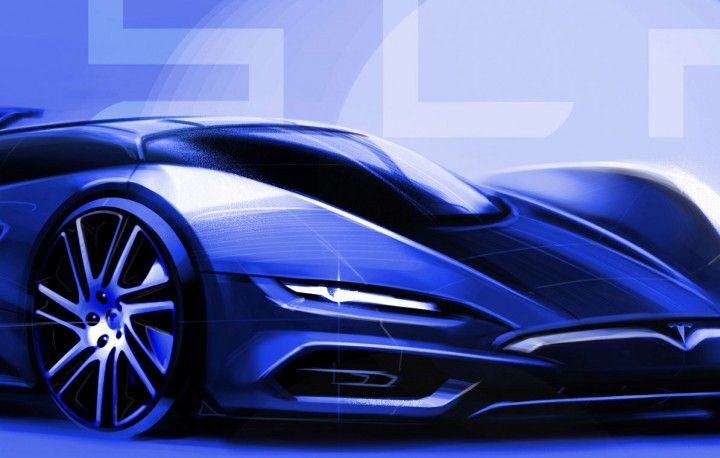 And fans have specifically asked to see the Cybertruck in games as well.  There’s a popular petition to get the Cybertruck into Rocket League, another esports game where players control cars to push a soccer ball into a goal.

While an avid video game player myself, we don’t follow esports here.  So apologies for the EV-adjacent post, but it’s a weekend after all.

I do consider the intersection between gaming and Tesla to be an interesting one.  Racing games in particular are used as a marketing device for many manufacturers, exposing younger people to their brand and letting them live out their car fantasies.

And in the intersection of gaming and Tesla, there’s a personal connection there for me.  Despite being a lifelong Nintendo fan who never had any non-Nintendo consoles, I bought a PS3, Gran Turismo 5 and a Logitech G27 racing wheel specifically because GT5 had the Tesla Roadster in it.  It was my dream car and I wanted a chance to drive it, and figured GT5 was the best chance I had.  Since then I’ve bought a Roadster myself (btw, it’s even better in real life), but GT5 is what really got me into cars and performance driving.  It taught me to be a better driver and sent me on this career path I’m on.

‘Neutral’ Pakistan pulls out of Malaysia summit of Muslim nations

Solange Releases New Album When I Get Home: Listen – Pitchfork

That magical super material Apple hopes will hit backspace on its...

Tennessee is under a state of emergency after the deadliest tornado...

Which Tesla Is Better For Road Trips, Model 3 Or Model...