Tsai said mainland China “challenge[d]” democratic values and global order through a combination of authoritarianism, nationalism and economic might.

“China is encroaching on us through their sharp power, but as a crucial member of the region, we know that Taiwan must fulfil its responsibilities to the international community,” Tsai said, as she stood against a backdrop of the island’s flag and a portrait of founding president, Sun Yat-sen, at the Presidential Office Building in the capital, Taipei.

“Their diplomatic offensives and military coercion pose a serious challenge to regional stability and peace.”

China maintains that Taiwan is part of its territory that should be retaken by force, if necessary.

Over the past year, China has stepped up pressure on Taiwan, parading its military might and wooing the island’s few remaining formal diplomatic allies. Since Tsai, who represents the pro-independence Democratic Progressive Party (DPP), was elected in 2016 it has lost seven of its 22 allies to Beijing.

With an election due in January, Tsai sought to appeal to a broad range of people, referring throughout the speech to the Republic of China.

It is a pattern she has adopted throughout 2019, said Ross Darrell Feingold, a Taipei-based lawyer and political risk consultant who has more than 20 years experience advising clients on Taiwan.

“Using the country’s formal name appeals to a greater group of voters,” he said. “If she refers only to Taiwan and not the Republic of China the appeal might only be limited to voters who always support the Democratic Progressive Party.”

The DPP favours and advocates for a separate Taiwanese identity, while the pro-China KMT traditionally sees Taiwan as the Republic of China and is pro-China.

Shelley Rigger, Brown Professor of Political Science at Davidson College in North Carolina and an expert in Taiwan’s domestic politics, said that Tsai’s speech came across as presidential rather than political.

“The thrust of the speech was that Taiwan has been through many tough times but has always emerged stronger.”

Resistance to China was a major theme in the speech.

Tsai told the nation Beijing was threatening to impose its “one country, two systems model” on Taiwan, adding that Hong Kong, where protests have been going on since June, was “on the verge of chaos” due to the failure of the model. Tsai has considered offering asylum to protesters on humanitarian grounds. 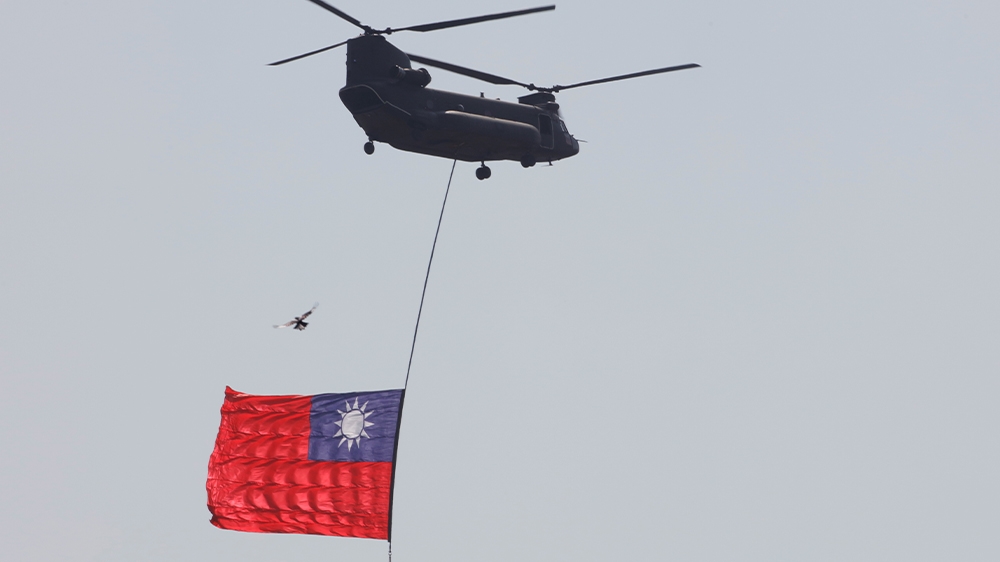 She said the “overwhelming consensus” of the island’s 23 million people was their rejection of “one country, two systems”.

The ROC was initially established by the nationalists in 1912 in mainland China, but when the communists won the civil war 70 years ago the ROC government under the KMT moved to Taiwan.

A military regime for nearly 40 years, Taiwan held its first-ever direct presidential election in 1996 and is now one of the region’s most vibrant multi-party democracies.

Rigger said the annual speech was an opportunity to affirm shared strengths and values.

Most people were probably enjoying the long weekend holiday and not actually watching the speech, Feingold said, but noted that Tsai appeared to be the frontrunner in January’s presidential election.

“An increasing number of voters have already made their decision, as evidenced by President Tsai’s growing lead in the polls,” he told Al Jazeera, referring to Tsai’s lead over her opponent Han Kuo-yu of the KMT.

As she wrapped up her speech, Tsai called on all citizens to remain united behind freedom and democracy.

“After walking this path together, we cannot be divided amongst ourselves,” she said.

“No one has a patent on the Republic of China, and no one can monopolise Taiwan.”

Backlash against Trump exiting WHO as virus grips Latin America

Does Prince George Have Any Royal Duties? When Those Begin for...

Some publishers pay streamers as much as $50k an hour to...