Syncrude will pay a fine of $2.75 million after pleading guilty federal and provincial charges in relation to the deaths of 31 great blue herons. 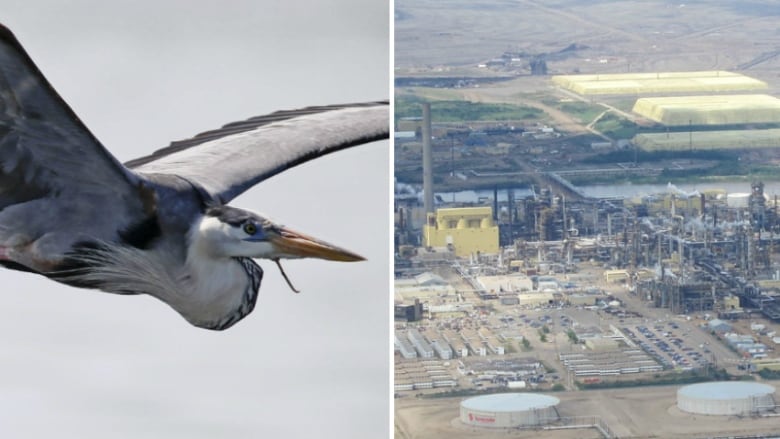 Syncrude was fined $2.75 million Monday in the death of 31 blue herons at the Mildred Lake oilsands mine site north of Fort McMurray in 2015. (Canadian Press/The Interior/Wiki Creative Commons)

Syncrude will pay a fine of $2.75 million after pleading guilty to federal and provincial charges in relation to the deaths of 31 great blue herons.

The herons died in August 2015 at an inactive sump on the Mildred Lake site, which at the time was not covered by Syncrude’s waterfowl protection plan to deter birds from landing at tailings areas.

The sump collected waste water containing residual bitumen from a storage site at the mine.

Syncrude was charged under the Migratory Birds Convention Act with depositing, or allowing the deposit of, a substance harmful to migratory birds into waters frequented by them.

It was also charged under the Environmental Protection and Enhancement Act with failing to store a hazardous substance to ensure it does not come into contact with or contaminate animals.

The province will direct $950,000 of the fine to creative sentencing projects that support biodiversity, habitat,and migratory pathways for birds and other wildlife in Alberta.

In a statement Monday, Syncrude called the incident regrettable.

“We immediately took steps to bring all these areas on our Mildred Lake and Aurora sites into our waterfowl protection plan,” said managing director Doreen Cole.

“We’re committed to being a responsible operator and this has strengthened our resolve to reduce the impact of our operations on wildlife.”

Syncrude, based in Fort McMurray, was fined $3 million after more than 1,600 ducks died after landing on a tailings pond in 2008.

Meeting back on with federal, B.C. governments: Wet’suwet’en hereditary chief

The Spiking Cost of Insulin Is Highway Robbery – Splinter