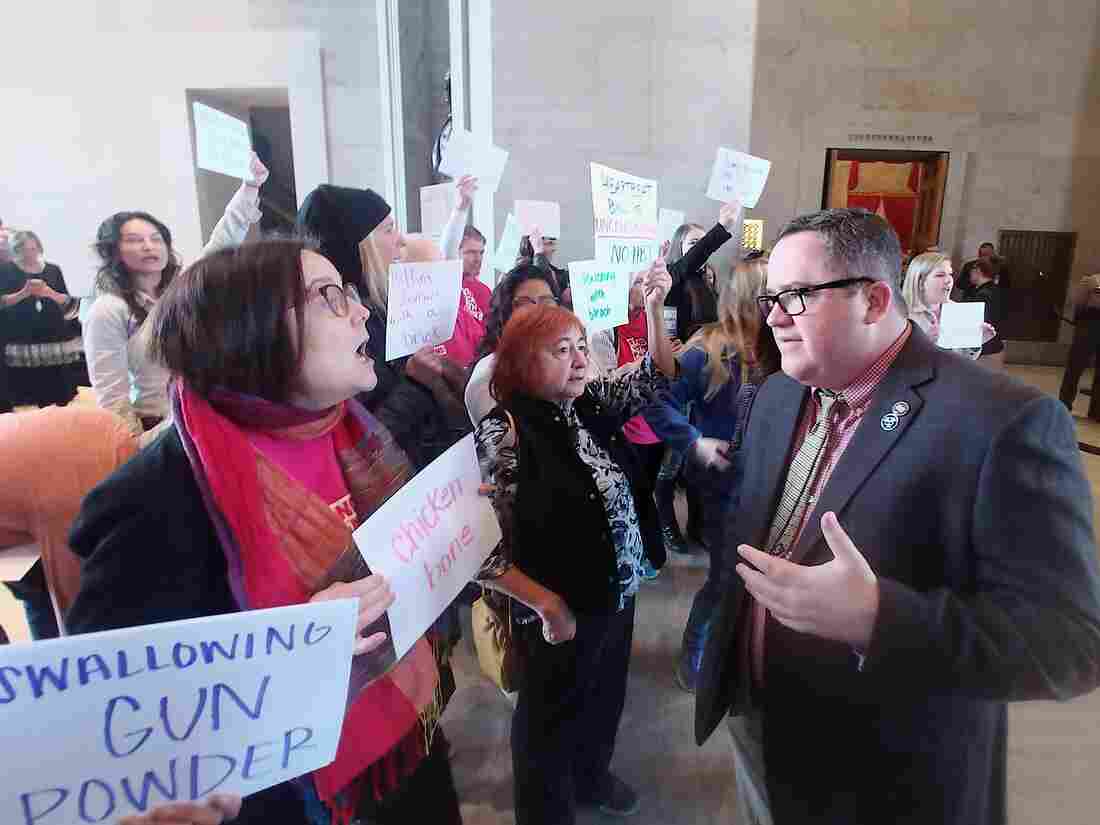 In the Tennessee capitol, state Rep. Matthew Hill took heat from abortion-rights proponents last month who had gathered to protest a bill he favored that would ban abortions after about six weeks’ pregnancy. That legislation was eventually thwarted in the Tennessee senate, however, when some of his fellow Republicans voted it down, fearing the high cost of court challenges. 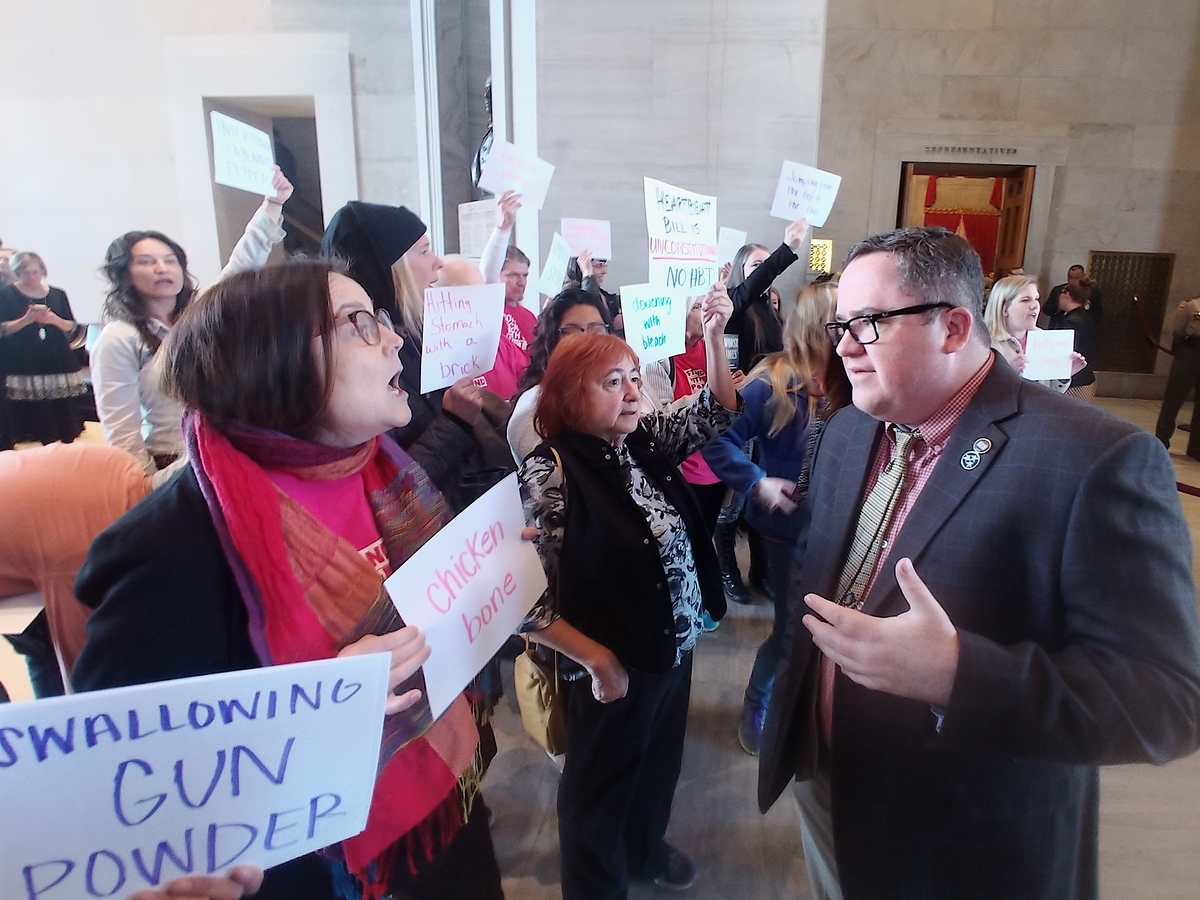 In the Tennessee capitol, state Rep. Matthew Hill took heat from abortion-rights proponents last month who had gathered to protest a bill he favored that would ban abortions after about six weeks’ pregnancy. That legislation was eventually thwarted in the Tennessee senate, however, when some of his fellow Republicans voted it down, fearing the high cost of court challenges.

The new anti-abortion tilt of the U.S. Supreme Court has inspired some states to further restrict the procedure during the first trimester of pregnancy and move to outlaw abortion entirely if Roe v. Wade ever falls. But the rush to regulate has exposed division among groups and lawmakers who consider themselves staunch abortion opponents.

“We see the Court as being much more favorable to pro-life legislation than it has been in a generation,” spokeswoman Jamieson Gordon says. “So we figured this would be a good time to pursue the heartbeat bill as the next step in our incremental approach to end abortion-on-demand.”

The Ohio law contains no exception for pregnancies that are the result of rape or incest; it does have an exception for the life of the mother.

Some say the rush to pass these bills is about lawmakers competing to get their particular state’s law before the Supreme Court. The state that helps overturn Roe v. Wade would go down in history.

More than 250 bills restricting abortions have been filed in 41 states this year, according to the Guttmacher Institute, a reproductive rights research and advocacy group.

“After the appointment of Justice [Brett] Kavanaugh, there really is just an environment in state legislatures to roll back abortion rights. And so we’re seeing these bans just fly through,” says Elizabeth Nash, who monitors state laws at Guttmacher.

But the speed of passage of some of these laws masks divisions about strategy and commitment to the cause within the anti-abortion movement.

In Tennessee, for instance, there’s a philosophical split between pragmatists and idealists.

A heartbeat bill in the state has had high-profile support, including from the Tennessee’s new governor. But the Republican attorney general warned such a law would be difficult to defend in court. And several Republicans, swayed by that logic, voted no for the heartbeat bill.

“This is an issue that is extremely important to me. It’s the reason I got into politics many years ago,” Republican state Rep. Bill Dunn said as the House approved the measure over his objection earlier this year. Dunn says he wants to stop abortion, but that will require strategy. He points out that no heartbeat bill has ever been enforced. And recent laws in Iowa and Kentucky have been immediately blocked in court. The same is expected for Ohio.

“Number one, it’ll probably never save a life if we go by what’s happened in the past,” Dunn argued on the Tennessee House floor.

But it’s money that ultimately stopped the heartbeat bill this year in Tennessee (It stalled in committee this week, though the state’s Senate Judiciary Committee agreed to review the bill this summer.)

Senate Speaker Randy McNally says he’s pro-life too, but has no interest in wasting tax dollars to make a point.

Even worse, in the view of Republicans who voted against the heartbeat bill, the state could end up paying the legal fees for groups that defend abortion.

“That is a big concern,” McNally says. “We don’t want to put money in their pockets.

The last time Tennessee had a case that went to the U.S. Supreme Court, it cost roughly $1.9 million. The experience was enough to give a few anti-abortion crusaders some pause. They voted this week with Democrats for a one-year delay on a heartbeat bill, vowing to study the issue over the summer.

Even if it doesn’t result in a case that upends abortion law, heavily Republican legislatures like Oklahoma’s want to be ready.

“If Roe v. Wade ever gets overturned, we won’t be prepared,” Republican Senate Pro Tempore Greg Treat said while explaining his so-called “trigger bill” at a committee hearing in February.

Treat’s legislation, modeled after existing laws in a handful of states, would “trigger” a state ban on abortion and make it a felony if Roe were overturned. A handful of states, including Arkansas, Kentucky, Louisiana, Mississippi, North Dakota and South Dakota, already have trigger laws on the books.

Oklahoma has some of the strictest abortion laws in the nation, such as mandatory counseling and a 72-hour waiting period. But the most conservative anti-abortion activists in the state want more immediate action. So they targeted Treat and other self-described pro-life Republicans with protests, billboards and fliers, accusing them of not being anti-abortion enough.

“I’ve been called every name in the book these past few weeks,” Treat says. “I’ve had my Christianity questioned. I’ve had a member of my own caucus hold a press conference and call me a hypocrite.”

Now he’s trying something else — an amendment to the state constitution that would reinforce that nothing in Oklahoma law “secures or protects” the right to abortion. But that’s still not anti-abortion enough for some.

“It’s going to add on to that legacy that we have of death and just status quo pro-life policy that does nothing,” says Republican state Sen. Justin Silk.

Not far enough in Georgia

In Georgia, a heartbeat bill passed the legislature, but has paused at Gov. Brian Kemp’s desk. Supporters of abortion rights don’t want him to sign it, of course, but some anti-abortion activists aren’t happy either.

“It really just does not go far enough in the protection of innocent human life,” says Georgia Right to Life executive director Zemmie Fleck. Fleck argues that certain exceptions in his state’s bill — for abortions after rape or incest if the woman makes a police report — make it weak.

Gov. Kemp has until May 12 to sign or veto the measure.

Cost as no object in Kentucky

The American Civil Liberties Union in Kentucky sued the day after a heartbeat bill was signed into law by Gov. Matt Bevin. But even during his annual speech to the Kentucky legislature in February, Bevin acknowledged his intent to challenge Roe v. Wade.

Kentucky has become accustomed to defending abortion restrictions in court. Currently, one law that makes it a felony for a doctor to perform a common abortion in the second trimester has been suspended indefinitely.

It is unclear how much it costs Kentucky to defend abortion laws that are immediately challenged. In an emailed statement, Bevin administration spokesman Woody Maglinger writes that the state is using in-house lawyers, and hasn’t hired outside counsel. He declines to provide a cost estimate on hours spent on these cases.

“It is impossible to place a price tag on human lives,” Maglinger writes.

US slaps new sanctions on Cuba over human rights, Venezuela

‘This Case Will Set A Precedent’: First Major Opioid Trial To...

Elon Musk says Tesla’s pickup will be able to tow as...

Fed chair Jerome Powell says he would not resign if Trump...