Iconic females in the music industry shine at the 2018 Essence Festival in New Orleans. (July 8)
AP

The fete brought together stars of all backgrounds to celebrate the theme of the “Power of Our Presence,” from Oscar nominee Regina King and Angela Bassett to Diddy and Beyonce’s mom, Tina Knowles-Lawson.

Here are the biggest moments from the afternoon: 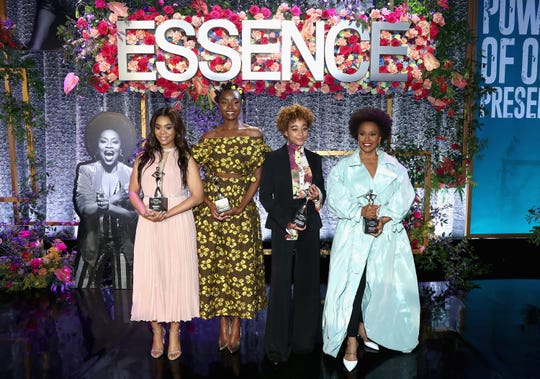 Stars speak (and sing) out about Jussie Smollett

Seemingly the only dark cloud surrounding the day of celebration was the latest development in the Smollett case, as the “Empire” actor was arrested Thursday morning on a charge of disorderly conduct by filing a false police report.

Although Lewis had “absolutely no comment” about the situation on the red carpet, she used song to express her thoughts about it during her award acceptance speech at the luncheon, though not mentioning Smollett by name.

Rep. Maxine Waters (D-Calif.) said Smollett was “a friend,” listing some of their past experiences together.

“I’m so worried, and I just want it to be over with,” Waters said. “I’m sorry if in fact he disappointed us. I want to wait until the final answer and results, but it’s a tragedy if in fact it’s a hoax.”

“Insecure” actress Yvonne Orji said that she’s “with a lot of people who are genuinely confused right now. We don’t know what to make of it.”

Jussie Smollett investigation timeline: How the actor went from assault victim to suspect

“Black Panther” is up for some Oscars this year, including best picture and costume design, and the cast is hoping for another big win after their SAG Awards milestone best-ensemble cast trophy.

Bassett, who played Queen Ramonda in the Marvel superhero juggernaut, is headed to the 91st annual Academy Awards on Sunday, and she shared how she’ll spend the evening with her co-stars.

“We’ll see each other that evening, we’ll hug, we’ll beam,” she said. “We’ll be proud, we’ll hope, [and] we’ll have a wonderful expectation of good. And we’ll go to work the next day.”

More:Oscars costume party! Get up close with iconic outfits from ‘Black Panther,”http://www.usatoday.com/”Bohemian’

Although her voice was quiet (due to allergies, she promises), Layne left everyone in the ballroom with a lump in their throats by the end of her speech. After an equally emotional introduction from on-screen mom King, Layne took the stage to talk about getting the call for the Essence cover and being thrust into the fame machine following her role as Tish in director Barry Jenkins”http://www.usatoday.com/”Moonlight” follow-up.

“Being here and receiving this award, it’s showing me that I’m not by myself in all of this,” she said.

“People ask me all the time, ‘How has all of this been?’ It’s really exciting and I’m so very thankful, but it’s also extremely terrifying,” she said, getting choked up. “Sometimes it’s really terrifying … and I have a hard time telling people that and asking for help, so I’m thankful to be in this room full of so many people who have just shown me so much love, support and encouragement.”

While introducing Hall for her award, Lathan spilled some of the tea (she said she knows “all” of bestie Hall’s secrets). And the tea was that Hall, known for her roles in “Scary Movie,”http://www.usatoday.com/”Support the Girls” and currently, Showtime’s “Black Monday,” almost left the industry to join a convent.

Lathan joked that the only reason Hall isn’t a nun today is because the cutoff age was 40 and Hall at the time was 41. Hall herself confirmed that tidbit during her speech, attributing the decision in part to a bad breakup. She described a time in the midst of her heartbreak when Lathan took her to talk to an “intuitive” woman: “This is right before the convent almost happened, and I remember I was so upset, but my friends were so there [for me].”

It’s been a few years since “Glee” ended, but Riley showed that her voice has not missed a beat.

The luncheon took a break between acceptance speeches to give the audience in the ballroom a musical interlude, courtesy of Riley accompanied by a pianist.

She gave a rousing performance of Franklin’s hit song “(You Make Me Feel Like) A Natural Woman” that would have made the late Queen of Soul proud.

Trump heads to Argentina and the kind of global gathering he...

Suicide rates falling around the world, study says – The Guardian

Star Trek is officially bringing back Captain Pike and Spock –...

EastEnders’ Lola has her big secret exposed in Ben showdown –...