Good over from Jaydev Unadkat, given eight runs in it.

Shreyas Gopal gave away just four singles in return figures of 3 for 27 in four overs.

Second wicket for Shreyas Gopal, dismissed Vijay Shankar for 35. Big wicket for Royals as Shankar was going all guns blazing, hitting three sixes and a four in his 15-ball cameo.

Jaydev Unadkat conceded a six and a four in the over, but took the important wicket of Kane Williamson.

Good start by Jaydev Unadkat, given away just six runs in it.

Kane Williamson (7 *) and Vijay Shankar (7 *) hit a four each off Ben Stokes. SRH on the right course

WHAT AN OVER! Shreyas Gopal sent Jonny Bairstow back to the pavilion and gave away just two singles in it. The credit for the wicket also went on to Dhal Kulkarni Bairstow scored 45 off 28 balls, which included a six and six fours.

Dramatic over from Ben Stokes A wicket, two boundaries and a drop catch all in the over Jonny Bairstow (44 *) got a life after Dhawal Kulkarni frop a tough chance at third man.

The first breakthrough in the 10th over David Warner went for 69 off 37 balls, which included two sixes and nine fours. Openers added 110 runs to a solid foundation for SRH, in their chase of 199.

Jonny Bairstow (34 *) helped SRH score 12 runs in the over, as they move closer to the target

* Jonny Bairstow brings up 100 for the home team with a big six off Shreyas Gopal.

David Warner keeping his attacking mode on, hit a six and a four off K Gowtham from the first two deliveries. The hosts are moving in the right track in the run chase.

End of Powerplay overs. Jonny Bairstow (16 *) joined the party, ended Jofra Archer’s over with back-to-back fours as Sunrisers scored 15 in it.

For David Warner in 26 balls, which included a six and eight fours.

FIFTY! @ davidwarner31 has been on the charge since the word go. Brings up a superb half-century off 26 deliveries … https://t.co/0DHN0lvoUg

Good start by Jofra Archer, gave away just three runs in the over

David Warner (31 *) looked in the mood for big score, hit a four in the over off Dhawal Kulkarni to score nine off it.

“Feels good to score an IPL, but this is just the start of the tournament and I got to stay grounded and do what the team wanted. The pitch was a bit slow to start with, but with time it got easy. We have set a good target with our bowling line-up. But cricket is a funny game, anything can happen. ”

A fine century from Samson and a knock of 70 by the skipper, propel @rajasthanroyals to a total of 198/2. Will the … https://t.co/a9pJNNVmC2

Ben Stokes (16 *) and Sanju Samson (102 *) finished the Rajasthan Royals’ over with style, scoring 21 off Bhuvneshwar Kumar. Bhuvi had an off day today, leaking 55 runs in four overs

Sanju Samson (96 *) hit a six off Sandeep Sharma in the over, as he comes to a well-deserved hundred Sandeep’s figures: 0-38 in four overs.

Sanju Samson (85 * off 49 balls) destroyed Bhuvneshwar Kumar with some elegant shots as the right-hander scored over 24 runs.

Tidy over from Siddarth Kaul, gave away just five runs in it. But Kaul was unlucky not to get the wicket of Sanju Samson (61 *), as the keeper Jonny Bairstow spilled a tough chance. Kaul’s figures: 0-32 in four overs

came off Nadeem’s over, but the spinner will be happy to get rid of in-form Rahane in it.

Skipper Ajinkya Rahane’s brilliant knock came to an end, after scoring 70 off 49 balls with the help of three sixes and four fours. Trying for another big shot, gave away a simple catch to Manish Pandey at long-off off Shahbaz Nadeem. Rahane added 119 runs for the second wicket with Sanju Samson.

. Time for another ‘strategic time-out’

For Sanju Samson off 34 balls with the help of two sixes and four boundaries. 11 runs came off Sandeep Sharma over

Rahane and Samson in just 65 balls

Rashid Khan put a break on Royals’ boundary spree with a tidy over. Gave just four singles in it. 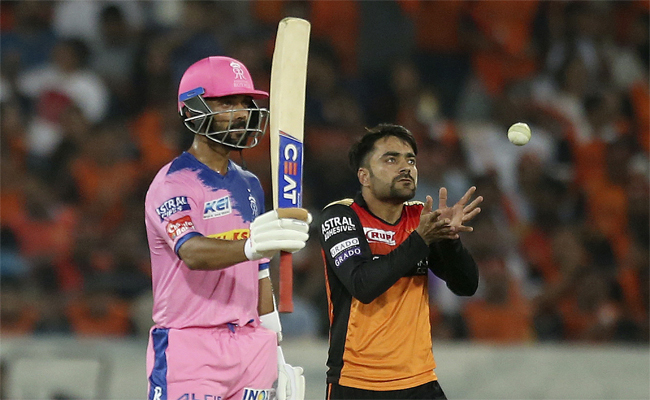 13 RUNS! After Rahane welcomed Vjay Shankar with a six over backward square, Samson hit a four to score 13 in the over.

* Sanju Samson (44 *) brings up 100 for Royals with an inside-out shot for a boundary off Vijay Shankar.

Rashid Khan conceded just seven runs in the over, which included a four by Sanju Samson (31 *)

Another big over for Royals The visitors are on the move.

Sanju Samson (23 *) hits another maximum, this time off Siddarth Kaul

Shahbaz Nadeem’s first over is the night so far.

End of Powerplay overs, Rajasthan Royals managed 35 for the loss of one wicket. Tidy start for Siddarth Kaul, just four singles came from it.

Good start by Rashid Khan Asked about some tough questions to the Royals batsmen Sanju Samson was lucky to get a boundary after edging the ball tantalizingly close to the slip fielder, soon after the fall of Jos Buttler Jos Buttler missed the ball while trying to sweep and was castled by Rashid Khan. This happened after The Englishman should have a look-in before going after Rashid, a proven wicket-taker in this format of the game.

Jos Buttler opens his account with a boundary off Bhuvneshwar Kumar, first of the Royals’ innings

Ajinkya Rahane flicks it towards deep square leg to open the Royals’ account.

“We would’vs liked to bat first as well. It’s important that we do it well with the ball soon.” Shakib and Hooda miss out from the last match. Myself and Shabaz come in. It looks like a good surface and it It is important that we adapt the ball first up and it’s all about executing our skills and our plans. The injury recovery is coming along well. Every side has a wonderful crowd before their homegrown at play.

“We’re looking to bat first. I do not know how this wicket will behave but I am sure that the wicket does not change much in the 40 overs, so looking to put runs and then defending. with the same combination; I do not believe in a lot of changes. I think stay in the present is all what this format is all about. We need to stick to our strengths and back ourselves.

* Kane Williamson back as skipper of home team, SRH

“Not a lot of fun as a fast bowler. There is a bit of grass, which means there will be some skid, and then some turn later on in the day” –

“He [Bhuvneshwar Kumar] was already the leader of the bowling group and now it is fun to play under him. It always helps when a bowler is leading the team as that means you are also better understood when it comes to strategising. fun playing under him and I am hoping he too, liked the experience of leading us “-

Head to Head: SRH vs RR Hello and welcome to the live coverage of the IPL match between Sunrisers Hyderabad and Rajasthan Royals.

Cardi B Has Some Advice For Trump Supporters During The Government...

Redskins Mock Draft Scenario: Trading up with the Jets – Hogs...

If You Thought Muscle Burns Fat, Think Again — This Is...

“Baby Shark” song in copyright battle with local entertainer and a...

Is Pakistan dragging its feet on Kartarpur corridor?

How to save water the old way – Times of India