Authorities in Spain have begun exhuming Francisco Franco’s remains from a state mausoleum, seeking to exorcise the ghost of a dictator whose legacy still divides the country more than four decades after his death.

Amid tight security and in virtual secrecy, his coffin will be taken on Thursday from a vast, imposing basilica in the Valley of the Fallen – which has long attracted both tourists and rightwing sympathisers – and reburied in a private family vault.

His remains will be transported either by helicopter or, if bad weather intervenes, by guarded motorcade.

Prime Minister Pedro Sanchez has made moving the remains of “El Caudillo” (The Leader) a priority since coming to power in June 2018, saying Spain should not “continue to glorify” a man who ruled with an iron fist after the bloody 1936-39 civil war that his Nationalist forces won.

“It is a great victory for dignity, memory, justice and reparation – and thus for Spanish democracy,” said Sanchez of the historic moment, which comes just over a fortnight before a general election.

With media prohibited, the exhumation ceremony, northwest of the Spanish capital, Madrid, will be witnessed by a select few: Justice Minister Dolores Delgado, a forensics expert, a priest, and 22 of Franco’s descendants. 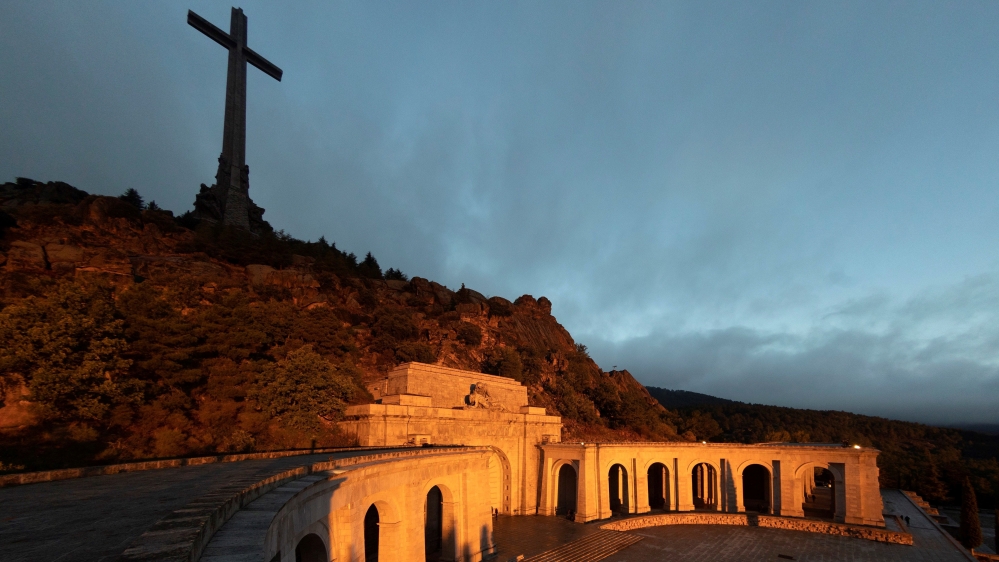 A general view of The Valley of the Fallen in San Lorenzo de El Escorial, Spain [Emilio Naranjo /Pool via Reuters]

They include his oldest grandson Francisco Franco, who labelled the operation – and its low-key nature – a political ploy by the governing Socialist Party.

“I feel a great deal of rage because they have used something as cowardly as digging up a corpse, using a body as propaganda and political publicity to win a handful of votes before an election,” he told Reuters news agency late on Wednesday.

Franco’s family lost a legal battle to keep his remains in the Valley of the Fallen or have them taken to a family burial site in the Almudena Cathedral in central Madrid.

Ordered by Franco in 1940 to celebrate his “glorious (Catholic) crusade” against the “godless” Republicans, construction of the Valley of the Fallen lasted for almost 20 years.

Partly built by the forced labour of political prisoners, the site is one of Europe’s largest mass graves, housing the remains of over 30,000 dead from both sides of a civil war that was triggered by Franco’s rebellion against an elected Republican government.

Most had fought for Franco but the monument also contains the bones of many Republican opponents who were moved there from cemeteries and mass graves across the country without their families being informed.

A 150-metre cross towers over the site which Franco dedicated to “all the fallen” of the conflict in what he called a gesture of reconciliation.

Since Franco was buried there after his death in 1975, flowers have been placed daily on his tomb.

The Francisco Franco Foundation, which defends the dictator’s memory, had called for supporters to protest outside the El Pardo cemetery on Thursday, but the demonstration was banned by the local authorities.

“It’s intensely symbolic for Spain,” said political scientist Pablo Simon, “because the (Franco) monument has always been connected to those who miss the old regime.”

“Exhuming the dictator’s body suggests that the Valley of the Fallen’s significance could be reclaimed, a normal process within democracies like ours,” Simon said.

Yemen’s Houthis to not ‘stop fighting’ after ceasefire

What Is Ryan Reynolds’ Secret To Making His Marriage To Blake...

From Constance Bay to Clarence-Rockland, Ottawa River continues to rise |...