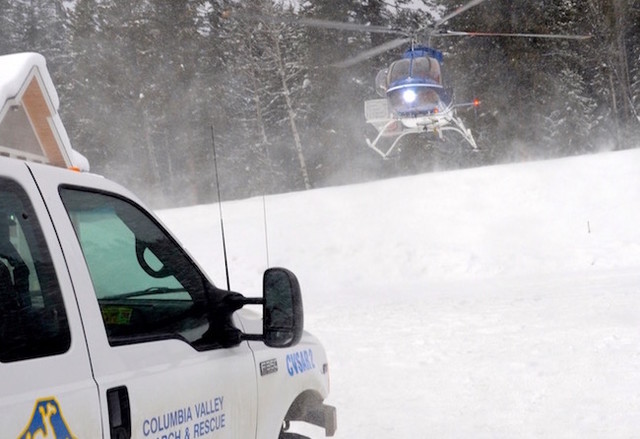 The search continues for a missing snowmobiler caught in an avalanche near Invermere.

Columbia Valley RCMP say two men from a group of nine snowmobilers were swept away by the avalanche on Saturday. One man was killed, and the other is presumed deceased.

The avalanche was reportedly triggered after one of the snowmobilers from Calgary was high marking, RCMP Cpl. Dan Moskaluk said in a press release.

Columbia Valley Search and Rescue recovered the 51-year-old victim, who was flown to confirmed deceased after being airlifted to hospital in Invermere.

The missing sledder, a 24-year-old male from Calgary and the son of the first victim, is believed to have been swept into a lake.

The RCMP’s Underwater Recovery Team was called in Sunday and will continue searching today.

No injuries were reported to the other seven snowmobilers.

One snowmobiler is dead and another may have been swept into a nearby lake after a group of three sledders triggered an avalanche in southeastern B.C.

A release posted by Avalanche Canada says the three were sledding Saturday on Mount Brewer in the Purcell Mountains, just west of Invermere, when two of the riders were swept away by what is described as a very large snow slide.

The release says the 200- to 400-metre wide avalanche tore away the snowpack from the surface to the ground layer and continued for more than a kilometre down the mountainside before running onto a small lake.

Avalanche Canada says at least one of the unnamed victims was wearing an airbag and managed to activate it, but that person was buried under more than two metres of snow and could not be revived.

Recovery efforts for the second person are continuing as rescuers say a transceiver signal has been located on the lake where debris is floating on the water.

A forecast from Avalanche Canada describes the snowpack over much of the Purcell region as weak and touchy due to two grainy layers, one right at the base and the other about 80 to 120 centimetres below the surface.

“Humans have and will continue to be able to trigger these layers in areas where the snowpack is shallow,” says the report.

It estimates the likelihood of triggering a slide in the area where the fatal avalanche occurred could increase due to a warming trend expected to last until Tuesday.

“Numerous very large avalanches have been reported daily,” the report warns, adding “this is the type of weak snowpack that could stick around for the remainder of the winter season.”

One person is dead and another is missing after an avalanche near Invermere.

The avalanche struck on Mount Brewer, in B.C.’s East Kootenays.

The victim was recovered from two metres of snow after a pair of snowmobilers was caught in the slide while out with a group of sledders, CTV News tweeted overnight.

On Sunday, Avalanche Canada had warned that warm weather is expected to peak today, which could affect backcountry snowpacks, especially in the Purcells and South Rockies.

Husband and pregnant wife from B.C. stuck in Wuhan, ask Ottawa to evacuate Canadians ‘as soon as possible’ | The Star

US embassy in Iraq hit by rocket attack, wounding at least one

Jessie Buckley says she openly embraces her anxiety after it ‘scared...

Over 15% of B.C. properties owned by foreigners paying speculation tax...