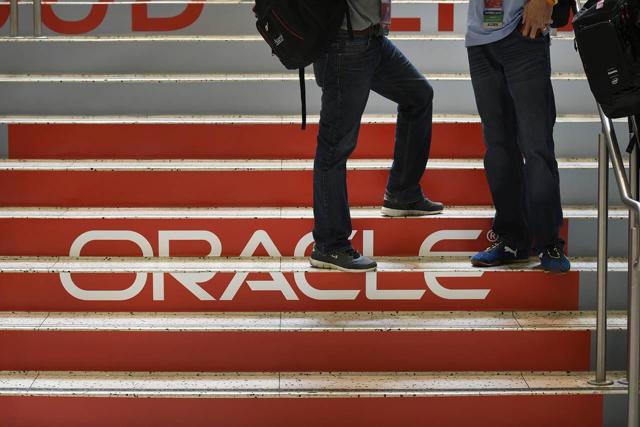 Oracle provides services that address various aspects of a company’s information technology environment – application, platform, and infrastructure. Revenue from its cloud offerings had been growing at double digits, while On-Premise software had been growing in the low single digits. The company’s $9 billion acquisition of cloud services company NetSuite in late 2016 came with a lot of fanfare. It jumpstarted Oracle’s top line and gave investors the impression ORCL was a growth stock. However, the company’s organic growth is now in decline, offset by cost takeouts and stock buybacks.

Last quarter, total revenue of $9.7 billion fell 1% Y/Y. This followed flat revenue growth for the quarter-ended November 2018. The trend in revenue growth has turned negative and it could deteriorate further. 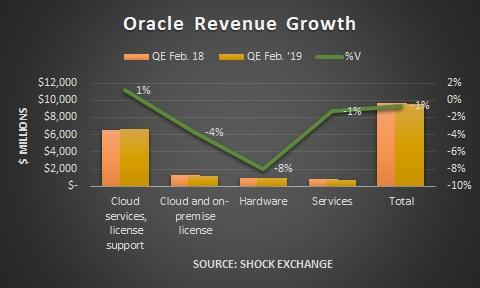 Over 30% of Oracle’s revenue is in decline. Hardware is being hit the hardest, falling by high single-digits. This segment provides hardware and hardware-related software products like servers, storage, and operating systems. It represents 10% of total revenue and its headwinds could continue. I would like to hear from management how it plans to stop the deterioration in Hardware, if at all.

What Levers Will Oracle Pull?

Despite stagnant to declining revenue growth, Oracle has levers to pull. The company has over $6 billion of operating expenses it can cut into. Last quarter, operating costs fell 2% Y/Y, outstripping the decline in revenue. Oracle has been gradually cutting costs each quarter in order to spur operating income growth. Last quarter was no different. The biggest cuts came in hardware (down 14%), R&D (down 5%), and general and administrative expenses (down 7%). Costs related to Cloud Services and License Support actually grew 5%. This makes sense since this segment is the growth engine.

The fallout from the cuts to spending was that operating income grew 3%. Operating income margin of 35% was up 300 basis points versus the year-earlier period. I expect management to make deep cuts to operating expenses again this quarter. Though earnings are growing, I question the quality of those earnings and how to value them.

Oracle has cash and marketable securities of $40 billion. This is down from $66 billion in May 2018. Its cash hoard could be used to acquire other technology companies, assuming Oracle could find some at attractive prices. In this frothy market, that could be a difficult task. Management has also engaged in share buybacks at around $10 billion per quarter. Share buybacks usually imply management believes its shares are undervalued. Why anyone would think that buying shares in a company whose top line is in decline is a good idea is beyond me. Maybe it’s a pride thing for management to keep Oracle’s share price elevated.

Certain analysts have questioned whether Oracle’s buybacks are sustainable. Oracle’s liquidity has declined by over $25 billion and what does the company have to show for it? I too believe the company could be forced to reduce or end its buyback program. This could remove an important catalyst for the stock.

ORCL is up about 20% Y/Y. Its declining revenue growth and potential reduction in share buybacks make the stock a sell.

I also run the Shocking The Street investment service as part of the Seeking Alpha Marketplace. You will get access to exclusive ideas from Shocking The Street, and stay abreast of opportunities months before the market becomes aware of them. I am currently offering a two-week free trial period for subscribers to enjoy. Check out the service and find out first-hand why other subscribers appear to be two steps ahead of the market.

Pricing for Shocking The Street is $35 per month. Those who sign up for the yearly plan will enjoy a price of $280 per year – a 33% discount.

Disclosure: I/we have no positions in any stocks mentioned, and no plans to initiate any positions within the next 72 hours. I wrote this article myself, and it expresses my own opinions. I am not receiving compensation for it (other than from Seeking Alpha). I have no business relationship with any company whose stock is mentioned in this article.

Kevin Hart Speaks Out For First Time Since His Crash –...

Once upon a time in fatherhood: Tarantino to become a dad...

US warns British telecom giants against use of Huawei kit –...

Everything to Know About McMillion$ and the McDonald’s Monopoly Game Scam...