The little-known 2020 United States presidential candidates came out swinging on Tuesday, hoping to make a breakthrough on the first night of the second Democratic debate.

“We have a choice: We can go down the road that Senator [Bernie] Sanders and Senator [Elizabeth] Warren want to take us, which is with bad policies like ‘Medicare for all’, free everything and impossible promises,” former Representative John Delaney said.

“It will turn off independent voters and get Trump re-elected,” he added.

“Their problems are here and now,” he said.

But Warren hit back.

“We’re not going to solve the urgent problems we face with small ideas and spinelessness,” Warren charged, calling for “a Democratic Party of big structural change.”

The first votes in the Democratic primary will not be cast for six more months, yet there is an increasing sense of urgency for many candidates who are fighting for survival.

More than a dozen could be blocked from the next round of debates altogether – and effectively pushed out of the race – if they fail to reach new polling and fundraising thresholds implemented by the Democratic National Committee.

That meant Tuesday saw more attacks than the first debate, as Democrats tried to highlight their points of divergence especially on issues including immigration and healthcare.

On Wednesday, another 10 candidates, including former Vice President Joe Biden and Senator Kamala Harris, will face-off.

After night one, here is what the first 10 candidates said on the major issues.

Tuesday night started off with lengthy and heated exchanges over healthcare, with centrists taking jabs at Warren and Sanders’s focus on “Medicare for all”.

Sanders’s plan to create a free, universal healthcare system, known as “Medicare for all”, has become a litmus test issue for liberal candidates, who have embraced the plan that would transform the current healthcare system despite the political and practical risks. Medicare for all would abandon the private insurance market completely in favour of a taxpayer-funded system that would cover all Americans.

In targeting Medicare for all, the more moderate candidates consistently sought to undermine the signature domestic policy proposal of the top two progressives on the stage, Sanders and Warren. They variously derided Medicare for all as too costly, ineffective and a near-certain way to give Republicans the evidence they needed that Democrats supported socialism.

The New England senators did not back down. They are known for their unapologetic embrace of aggressive plans to overhaul healthcare, higher education, childcare and the economy – ambitious and expensive steps that may be popular among many Democrats but give Trump and his Republican allies ample opportunity to cast all Democrats as extreme.

“I don’t understand why anybody goes to all the trouble of running for president of the United States just to talk about what we really can’t do and shouldn’t fight for,” Warren said in a critique of her detractors. 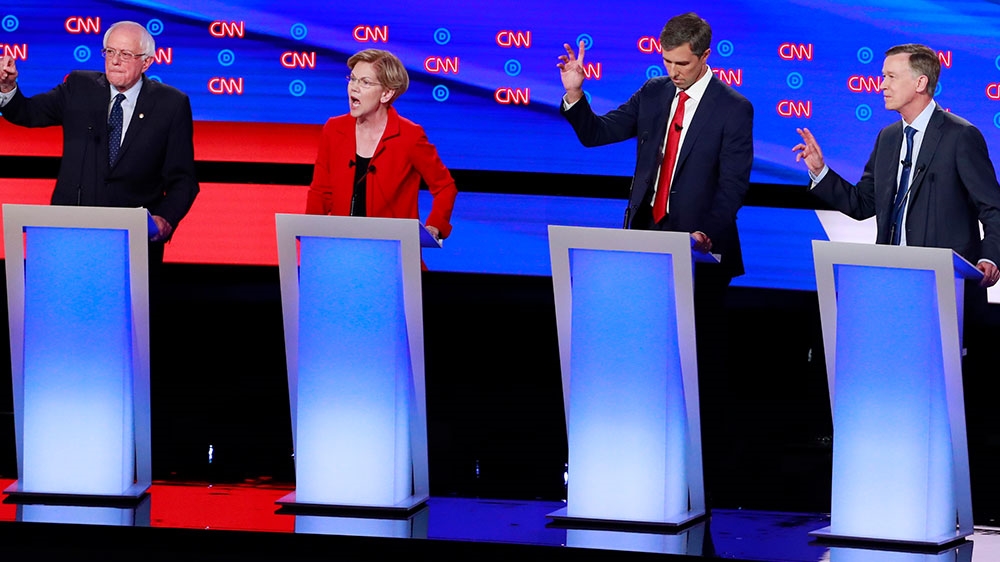 The candidates also differed on immigration policy – disagreeing on whether irregular border crossings should be decriminalised.

“You don’t have to decriminalise everything,” Bullock said. “What you have to do is to have a president in there with the judgment and the decency to treat someone that comes to the border like one of our own.”

Warren disagreed, saying: “We need to expand legal immigration, we need to create a path for citizenship not just for dreamers but for grandmas and for people who have been working here in the farms and for students who have overstayed their visas.”

“You are playing into Donald Trump’s hands,” Bullock said.

After weeks of racist and racially charged comments coming from the White House, race has become a focal point of the 2020 campaigns.

Pointing to water problems in communities like Flint, Michigan, Williamson said poor, minority areas fall victim to a “collectivised hatred” that only deepens their problems.

Hickenlooper said Democrats must show they can “delegate an urban agenda” for substantive changes in schools and affordable housing.

Asked how she would combat white supremacy, Warren said she would call it out as “domestic terrorism”, blaming Trump for racially unequal policies in economics and education.

Tuesday’s debate was the first since Trump used racist language to attack four Democratic congresswomen of colour, telling them to “go back” to their countries even though all four are US citizens. He also called the majority-African American city of Baltimore a “disgusting, rat and rodent-infested mess”. 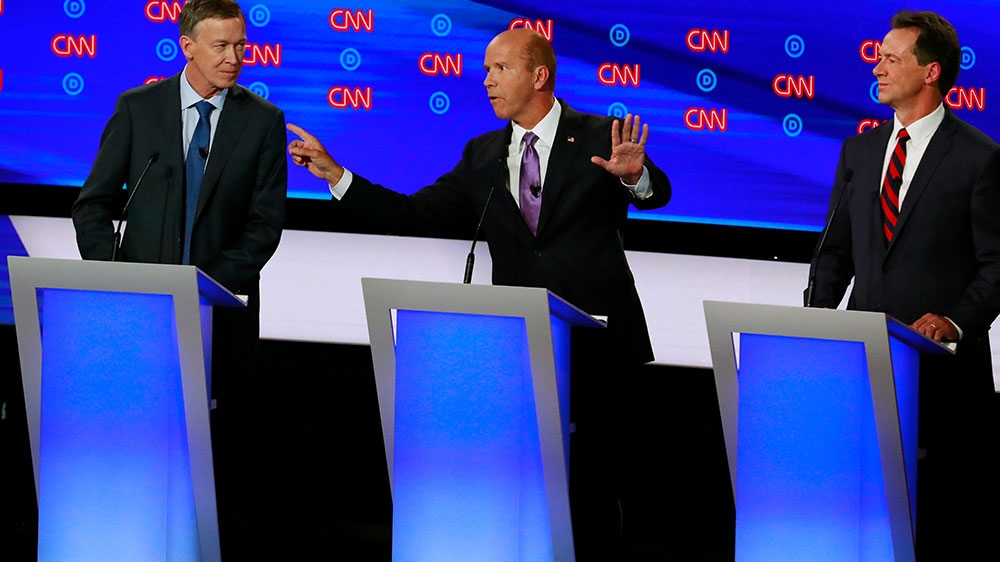 Buttigieg said that as mayor of the diverse town of South Bend, Indiana, “the racial divide lives within me”.

Buttigieg, who is white, said he did not become mayor “to end racism”, but he had worked on issues of race, crime and poverty affecting communities of colour.

Buttigieg has been criticised for his handling of a police-involved shooting that took him off the campaign trail last month. He came home to a African American community that was frustrated and outraged nearly five years after the Black Lives Matter movement was born amid increased awareness about the shootings of unarmed African American men by police.

Trump has been eager to paint the entire Democratic field as socialists, seeking to make any eventual nominee untenable to voters by arguing that Democrats want to raise taxes, open the US borders and take away private healthcare.

The dispute between the moderate and liberal wings of the Democratic Party highlighted the central question of the nominating contest: Which candidate in the field of more than two dozen would be best positioned to beat Trump next year?

Bullock criticised his fellow candidates for being too liberal in the opening round of debates last month in Miami, Florida.

“Watching that last debate, folks seemed more concerned about scoring points or outdoing each other with wish-list economics than making sure Americans know we hear their voices and will help their lives,” Bullock said.

Progressives argued their policies would excite voters and allow them to draw a distinct contrast to Trump.

Buttigieg called on his party to stop the infighting.

As in most debates, foreign policy issues got little attention, but candidates on Tuesday did discuss Afghanistan and China.

Sanders said he would work as president to strengthen the US’s standing with the United Nations and focus on diplomacy, not military action.

Sanders was asked during Tuesday’s debate what differentiates his aversion to the global US military presence from Trump’s opposition to being “policeman of the world”. Sanders responded that Trump is “a pathological liar”.

Sanders’s stance on diplomacy was echoed by former Governor Hickenlooper.

Buttigieg pledged to withdraw from Afghanistan – where he served – by the end of his first year in the White House.

The South Bend, Indiana, mayor also advocated for a three-year sunset provision for authorisations of the use of military force, noting that those deployed to Afghanistan will soon be too young to have been alive during the September 11, 2001, attacks.

Candidates sparred over how to approach China and criticised the Trump administration’s repeated use of tariffs to try to win concessions in trade agreements.

Hickenlooper said the US needed a new approach to China instead of tariffs. “Trade wars are for losers,” he said. “Let’s negotiate (a) better trade deal but you are not going to win against China in a trade war when they’ve got 25 percenr of our total debt.”

Ryan said the US needs “a targeted response against China but you know how you beat them? You out-compete them. We’ve got to fill these factories in Detroit, in Youngstown that used to make cars and steel.”

O’Rourke said the Trump tariffs “are a huge mistake. They constitute the largest tax increase on the American consumer, hitting the American consumer and working poor especially hard … When have we ever gone to war – including a trade war – with our allies and friends and partners?”

Bullock said using tariffs to win trade deals did not make sense – for “farmers anywhere or the manufacturers here in Detroit.”

Who’s on for night two?

Backlash against Trump exiting WHO as virus grips Latin America

How to Watch SpaceX Launch Astronauts to the ISS – WIRED

Why #jimmyfallonisoverparty is trending: Jimmy Fallon did blackface in 2000 –...

US sanctions to slow down deployment of 5G technology: Huawei exec...

Tight security in Ayodhya ahead of Babri mosque-Ram temple ruling