Hundreds of thousands of youth worldwide are participating in a school strike, demanding action on climate change, heeding a call by Swedish teenager Greta Thunberg to hold demonstrations across the world on Friday.

Teenagers on the streets of Paris warned governments on Friday there would be no summer let-up in their efforts to push for stronger action on climate change, as international green campaigners called a global strike for September 20.

“I should be at school, revising for my French baccalaureat – but I’d rather be here, for my future,” said Jules, 17, who only wanted to give his first name.

He and five friends decided to skip school despite end-of-year exams creeping up, to participate in what is thought to have been one of the biggest global climate actions by young people yet, mobilising hundreds of thousands.

Organisers expect strikes and demonstrations to happen in more than 1,600 places in 110 countries – from New Zealand to Syria and Venezuela.

By 19:00 GMT, nearly 2,500 strikes had been registered on the Fridays for Future website, with the number likely to rise. 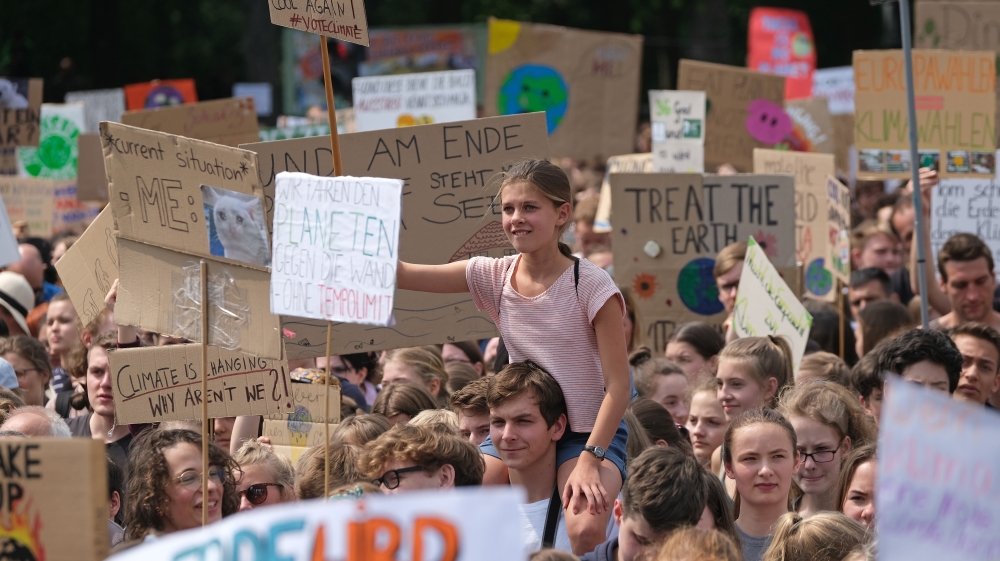 The students are following in the footsteps of 16-year-old Thunberg who has been credited with starting the movement.

“I think politicians around the world think the movement will fade and that people will stop striking, especially with the summer break coming up,” said Laure Miro, 16, striking for the second time in Paris. 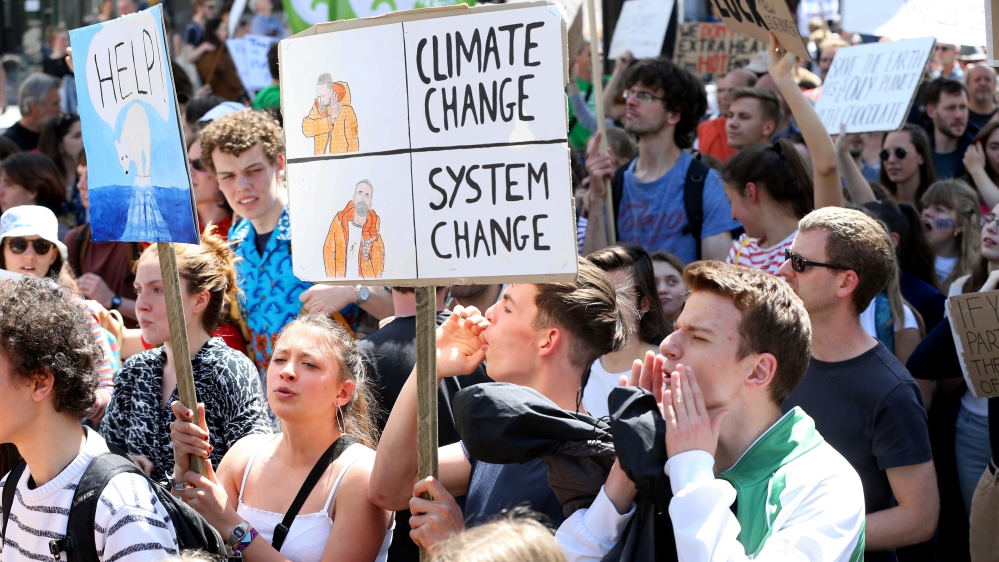 “The strikes keep getting bigger, more and more people are getting involved and we are very determined. We’re not going to stop here, after all this work,” she said. “Greta spoke out so we could act.”

School strikers said they would kick-start a week of action, starting on September 20 with a worldwide strike for the climate, before a key summit on climate change organised by the secretary-general of the United Nations on September 23.

Bill McKibben, a founding member of global climate campaign 350.org, said adults would join the young people by “walking out of our workplaces and homes”.

“We hope to make it a turning point in history,” he said in a statement on Friday.

Thunberg – who has been nominated for a Nobel Peace Prize – is urging governments to declare a climate emergency as has happened in Britain, Scotland and Ireland, a call echoed by many on European strikes.

Thunberg told thousands of supporters gathered in Stockholm’s banking district on Friday that this week’s European elections should be focused on tackling climate change. 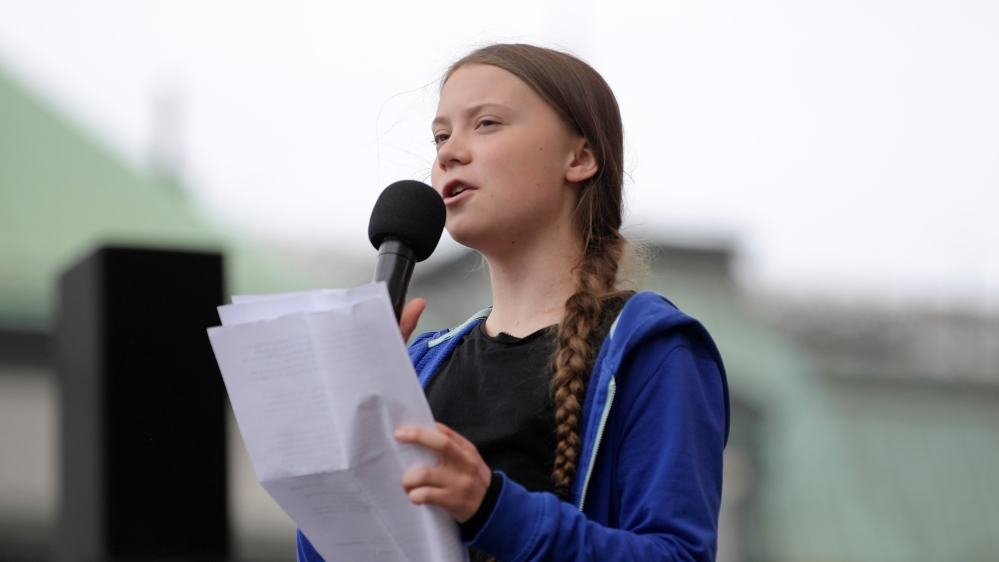 “If we don’t do it at the European Union level, or even on a global scale, it will be pointless,” said Anthony Didelet, a 17-year-old student in Paris.

“With the European elections coming up [in France], I think this is the time to make ourselves heard.”

In Barcelona, more than 200 people – from school pupils to university students and families with young children – braved the rain, shouting slogans such as “Change the system, not the climate” and “No to pollution”.

Many waved homemade banners written in English, and the march ended outside city hall where a timer with red sand was placed to symbolise how time is running out to act on the “climate emergency” and speakers urged politicians to step up. 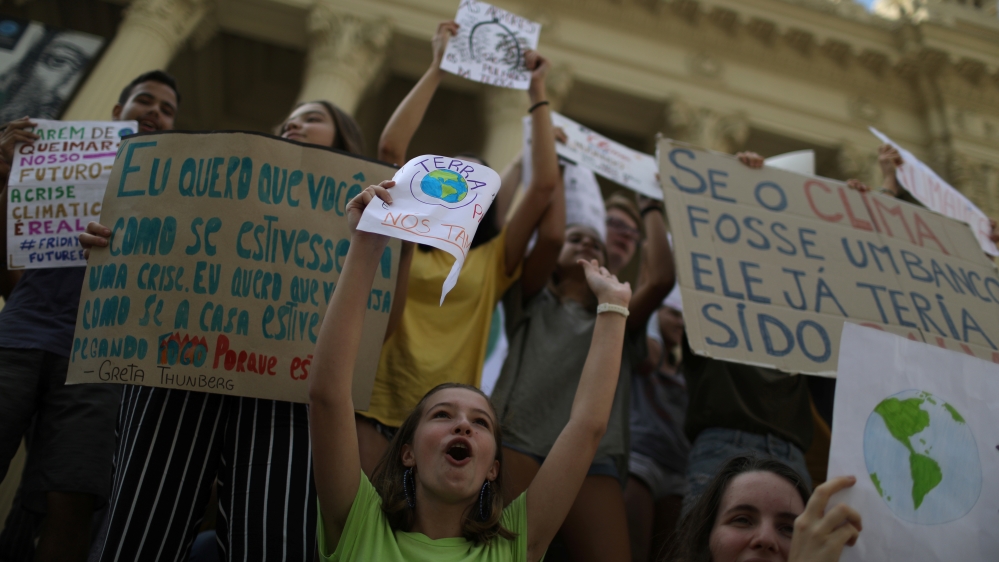 In Rio de Janeiro, a small group of students gathered outside the state legislature to deliver a letter dated from the future in which they lamented Brazil‘s loss of coastline, rainforests and species.

“We, the Brazilians of the future, are also asking you: Is there anything more important than protecting life and ensuring a quality future for the next generations? No, there is not,” they wrote.

In more than a dozen other cities throughout the country, youth also staged strikes and took to the streets, using the issue to challenge the environmental policies of the far-right government of President Jair Bolsonaro.

Gap Squeezing in PS5’s Unreal Engine 5 Demo Was Not a...

Iraqi protesters attempt to storm US embassy in Baghdad

The Bachelor Listen To Your Heart: Roses & Rose: Celeb Judges,...