Russian police have detained hundreds of people attending an unauthorised protest in the country’s capital, Moscow, to demand free elections, according to a monitoring group.

Phalanxes of helmeted riot police linked arms and swept people away on Saturday as activists gathered on Pushkin Square to rally against the exclusion of independent and opposition candidates from the Moscow city council election.

The crowds were pushed to Trubnaya Square where police continued the crackdown.

At least 828 people were detained by police, according to OVD-info, an independent monitoring group. Police said they had detained 600 and said 1,500 had attended the protest, though footage of demonstrations which flared in different parts of Moscow suggested many more had taken part.

At a similar protest last week, police arrested at least 1,400 demonstrators, beating some people with truncheons.

OVD-info said some of the detainees at the latest protest reported being beaten by the police. Those allegedly beaten included a member of the precinct election commission, Aleksandr Sviderskiy,

MediaZona, a Russian media outlet, shared a video on Twitter that showed police beating a protester who was lying on the ground.

Grigory Durnovo, a coordinator for OVD-info, told Al Jazeera that police started to detain protesters even before the demonstration began.

“The rally was planned to start at 2pm Moscow time [11:00 GMT]. The first detentions started about two hours before. We can call it preventive detentions, because people were taken to police stations and they were told to sign warrants warning them not to attend the rally and even not to appear in the streets close to the place where the rally was to be held,” he said from Moscow.

Prominent activist Lyubov Sobol, currently three weeks into a hunger strike after being barred from taking part in the local polls, was dragged from a taxi and detained as she set off for the rally on Saturday.

Al Jazeera’s Imran Khan, reporting from the protest in Moscow, said there were more police officers in the area than demonstrators.

“They are going into the crowd and detaining people. Most of the protesters are going peacefully, letting themselves be arrested. But this is nowhere near the number we have seen in previous protests,” he said.

“The massive security operation by the Moscow police appears to have worked.”

The dispute over the local election has provoked a large outcry. On July 20, about 20,000 people turned out for a demonstration that was the largest in the city in several years. 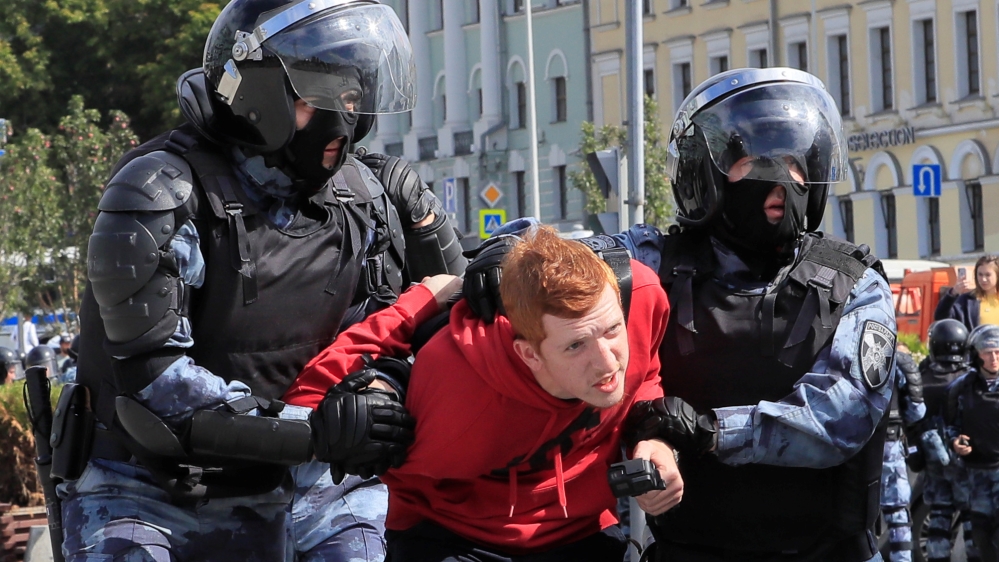 People in the crowd on Saturday said they just wanted the opposition to have a chance to run. “I want there to be big changes… now there is an atmosphere of total control,” Varvara, a 22-year-old artist, told AFP news agency.

“I believe everyone should have a right to take part [in the polls],” 39-year-old Robert said.

The Moscow city council, which has 45 seats, is responsible for a large municipal budget and is now controlled by the pro-Kremlin United Russia party. All of its seats, which have a five-year term, are up for grabs in the September 8 vote.

Once a local, low-key affair, the vote has shaken up Russia’s political scene as the Kremlin struggles with how to deal with strongly opposing views in its sprawling capital of 12.6 million. 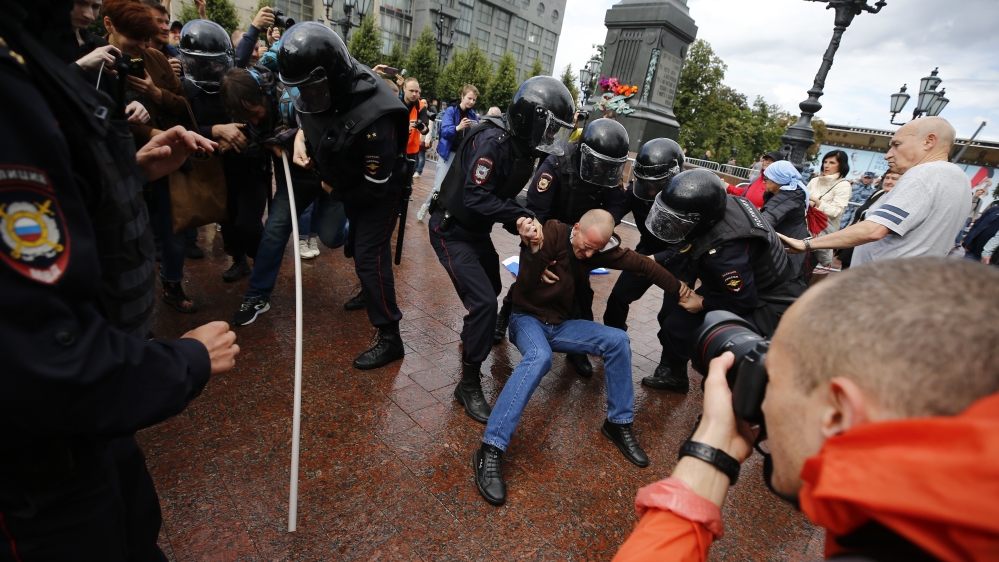 Employees of the Foundation for Fighting Corruption (FBK) “received a large sum of money from third parties which they knew was procured illegally”, investigators said, alleging the group “laundered” one billion rubles ($15.3m).

“Accomplices” of FBK “gave a legal appearance” to the funds by transferring them to bank accounts and ultimately to the accounts of the FBK, investigators said.

The FBK collects money through donations, and Navalny’s ally Leonid Volkov dismissed allegations of money laundering as an attempt to stamp out Navalny’s national network of volunteers.

Navalny is currently serving 30 days behind bars for violating rules on public gatherings. Last weekend, he was hospitalised with symptoms his doctor said looked like poisoning.

A state toxicology lab said no traces of poison were found.

Several of Navalny’s associates are also in police custody over protests about next month’s elections in Moscow.

President Vladimir Putin has yet to comment on the situation in Moscow.

H-1B visas: 10 companies that got the highest foreign labor certifications...

Kit Harington Has a “Game of Thrones” Finale Rebuttal | E!...

Cancer patient from Blackwood is first in Wales to get the...

Kate Middleton STUNS in jaw-dropping lace gown on night out with...

Jack Black Wants To Retire From Acting After His Next Movie...