Qatar’s national football team is set to face Saudi Arabia in the 24th Arabian Gulf Cup semi-final on Thursday, amid signs of a growing thaw in relations between the regional rivals.

The highly-anticipated match will take place at the al-Janoub Stadium in al-Wakra on the outskirts of capital Doha at 8pm local time (17:00 GMT).

Qatar’s Maroons secured their semi-final place after an emphatic 4-2 win against the United Arab Emirates (UAE) on Tuesday.

Saudi Arabia, which lost its opening match against Kuwait, nevertheless, finished at the top of Group B after sending reigning champions Oman packing with a 3-1 win.

Felix Sanchez, the Qatar team’s Spanish coach, said the Maroons could not afford to make any mistakes in the game against Saudi Arabia’s Green Falcons.

“At this point in the competition, you cannot make mistakes,” he told a news conference on Wednesday. “We are playing against a strong team, we will try to play our game and will do our best to get a strong result.”

Sanchez, who led the Maroons to their first-ever Asian Cup win last February, stressed the importance of securing a win today.

The biennial eight-nation tournament has attracted a lot of attention this year in light of a two-year diplomatic and transport blockade imposed on Qatar by three of its regional neighbours.

In June 2017, Saudi Arabia, the UAE, Bahrain – plus Egypt – cut off diplomatic ties and imposed an air, land and sea blockade on Doha after accusing it of “supporting terrorism”.

Doha has consistently and vehemently rejected the charges.

Saudi Arabia, Bahrain and the UAE reversed their decision to boycott the Gulf Cup at the last minute this year, leading to a revised draw.

The Saudi team symbolically flew straight to Doha despite the ban on direct flights. The UAE team, however, made an obligatory stop in a third country. 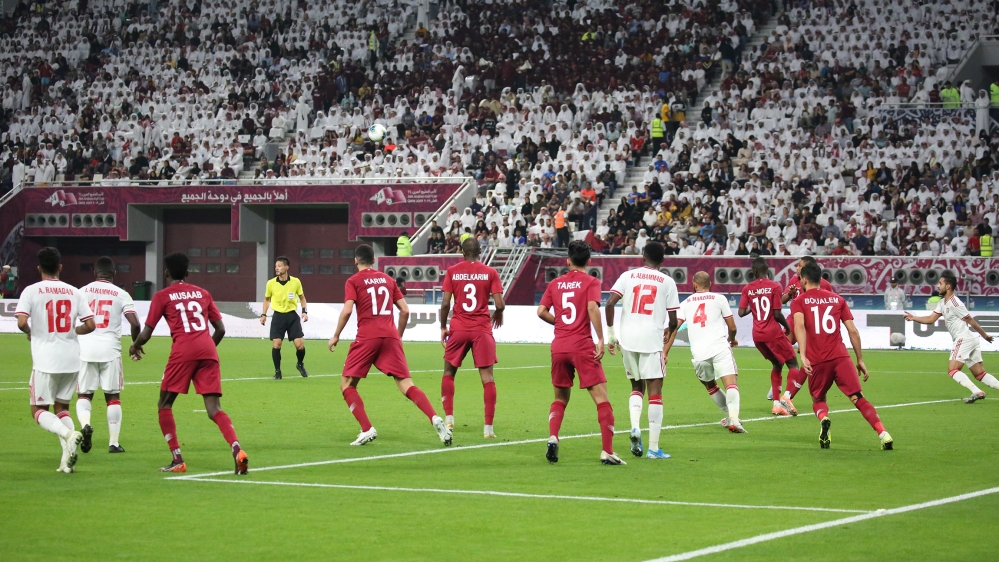 Qatar’s Maroons in action against the UAE football team, who they beat 4-2 on Tuesday [Showkat Shafi/Al Jazeera]

“Amid the ongoing Gulf crisis and the war over narratives that has been waged against Qatar by its neighbours since 2017, this football match is highly political,” he said.

Kreig noted that Qatari fans have made an effort “not to politicise the cup”.

During Qatar’s match against the UAE on Tuesday, Qatari fans stood for the Emirati national anthem, and Kreig expects more of the same.

“So far, Qataris have shown fair sportsmanship and the same will be expected during the match against Saudi Arabia,” he said.

“Both the Saudi and Qatari governments will be quietly hoping that the game passes without incident, given the apparent closeness of some sort of rapprochement between Riyadh and Doha in the lead-up to the GCC summit,” he told Al Jazeera.

This is the fourth time Qatar – a three-time winner of the cup – is hosting the regional tournament.

Saudi Arabia’s football coach Herve Renard admitted that the match with Qatar will be difficult, but he said the Green Falcons have “prepared well” for it.

“We are playing the champions of Asia, but they also have to respect Saudi Arabia,” the Frenchman told a news conference on Wednesday.

“We are here to prepare the game well… We can put our opponents in a difficult situation,” he added.

The winner will face either Iraq or Bahrain in the finals, which will be held on December 8.

Bahrain’s football association has said it will fly two planeloads of supporters directly to Doha, another sign of a reconciliation between the blockading countries and Qatar.

Haftar holds meetings in Greece ahead of Libya peace summit

Reforestation is not necessarily about planting more trees

The weapon system believed to have shot down UIA Flight 752...

Popular emulator RetroArch is coming to Xbox One – TechSpot

From spying to lobbying, Israel’s fight against BDS intensifies