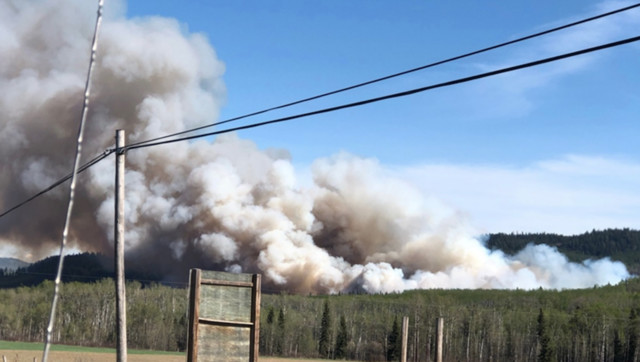 Firefighters in the B.C. Interior have made what the BC Wildfire Service calls “good progress,” in battling a rural blaze authorities believe is human caused, that grew some 20 times larger in just a few short hours.

The Lejac wildfire, along an area south of Highway 16 and roughly 5 kilometers east of the Village of Fraser Lake, has swallowed up some 260 hectares.

As of Sunday morning, fire crews had managed to create guards, or fuel breaks, using machinery around 70 per cent of the fire.

“We had pretty significant winds yesterday and that was a big concern,” Thiessen said in a phone interview Sunday.

The evacuation area affects only about half a dozen homes in an area that formerly hosted a residential school, Thiessen said.

An evacuation alert is in place for another area, meaning about 40 people there have to be ready to leave at a moment’s notice.

The BC Wildfire Service says that as of Sunday morning, the fire was considered 70 per cent “guarded” but zero per cent contained.

An out-of-control wildfire in central British Columbia has prompted a local state of emergency and several evacuations.

The Regional District of Bulkley-Nechako issued a state of emergency Saturday night and ordered people to leave an area near the community of Lejac, about five kilometres east of Fraser Lake.

An evacuation alert is in place for a larger area, meaning people there have to be ready to leave at a moment’s notice.

The BC Wildfire Service says the blaze was discovered on Friday, May 3.

As of Saturday night, it was estimated to be about 260 hectares in size and was considered to be zero per cent contained.

Twenty firefighters, four air tankers and several pieces of heavy equipment have been deployed to fight the fire.

Some residents have been evacuated from their homes near Fraser Lake Saturday, after a wildfire continues to grow in the area.

Sixteen firefighters, along with airtankers, have responded to the growing fire, about two hours west of Prince George.

The BC Wildfire Service has estimated the fire is burning an area of about 100 hectares, and it’s visible from Highway 16.

“The bombers have been at the fire for a while now, we are all praying they can get this fire out fast and all the homes and people stay safe,” Fraser Lake mayor Sarrah Storey wrote on Facebook at about 6 p.m. Saturday.

The fire is believed to be human caused.

Liberals gamble that bringing Gerald Butts back for election campaign is...

Where’s the beef? After bad loss in Dallas, Trail Blazers… –...

Lyft has a ‘clear early-mover advantage’ in beating Uber to an...

2 years without answers, family of missing Edmonton woman desperate for...