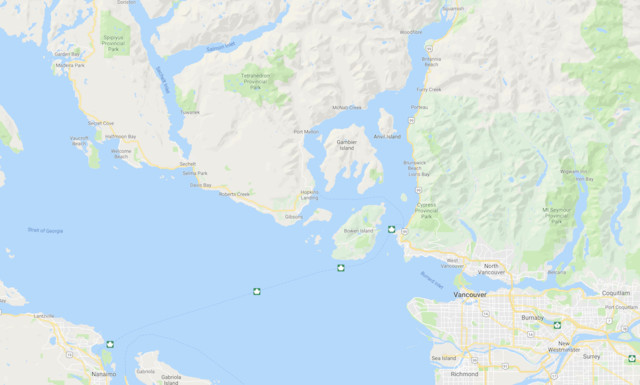 Sunshine Coast resident Ian Bolden says he was out paddling on Davis Bay Tuesday when he watched a float plane circle in the sky, dip low toward the water, turn into the wind and disappear in a big splash.

Bolden hustled back to shore to report the crash and says by the time he was done, rescue crews were already circling the area.

Officials say three people were aboard the plane when it went down Tuesday afternoon and all were taken to hospital with minor injuries.

Bolden says he watched a tug boat hauling gravel near the crash assist in the rescue.

“It cut its barge free and blasted out to where the crash site was and picked up the people, who were then transferred to the coast guard hovercraft, which brought them to shore just down the beach from us,” he says.

“They appeared to be in reasonably good condition.” he says, adding they were walking with the support of rescuers.

It’s a high-traffic area for sea planes, and Bolden says he has seen a few scary landings, including one where a plane appeared to lose its engine power and glide safely down to the water.

He could not tell if the aircraft that crashed Tuesday was commercial or private and officials could not confirm that immediately either.

RCMP Const. Karen Whitby says they appeared to have only “bumps and bruises,” but were taken to the local hospital for further assessment. Emergency Health Services confirmed their injuries were “minor.”

The Joint Rescue Co-ordination Centre says the aircraft has sunk.

The case is being handed to Transport Canada for investigation.

Sunshine Coast RCMP have reported a plane crash in the water west of Davis Bay.

“All occupants recovered, no injuries reported at this time,” RCMP tweeted about 1:15 p.m.

Officials on scene say three people from the plane were rescued, with minor injuries, by a tugboat that responded to the call.

College Football Playoff rankings — LSU vs. Ohio State for No....

Pokemon Go Is Giving Out A Ton Of Stardust This Week...