Manila, Philippines – The coronavirus, also known as COVID-19, has now killed more than 1,800 people and infected more than 72,000 others since it was first detected in China‘s city of Wuhan in December.

In the Philippines, where the first death outside of China was reported, the government has faced intense criticism over its handling of the outbreak, and its decision to allow direct flights from China despite the lockdown in Hubei province, the epicentre of the epidemic.

A jittery public erupted in anger after it was revealed that the 44-year-old Wuhan resident, who later died, and a female companion, visited three cities in the Philippines before they were both tested positive of the virus in the capital, Manila.

In a Senate hearing following the first confirmed death linked to the virus, legislators questioned Health Secretary Francisco Duque III over the government’s system of identifying and tracking down people, who may have come in contact with the infected couple – a process known as contact tracing.

As of Monday, February 17, there were three confirmed coronavirus cases in the country, including one death and one patient, who had returned to China before her infection was confirmed. At least 171 patients remain hospitalised and are under investigation, while 350 others were discharged.

At San Lazaro Hospital, where the infected couple from Wuhan was admitted, medical staff told Al Jazeera that the lack of transparency from health authorities, understaffing, and shortage of protective medical equipment expose the dire state of the country’s public health system that is “ill-prepared” to manage the outbreak.

“When the health department said we are prepared for this (COVID19), I don’t know if they are saying that because they want to prevent public panic or they want to lie,” one staff nurse, who asked not to be identified, told Al Jazeera.

Another nurse recalled to Al Jazeera how the medical staff at San Lanzaro grew anxious after the Chinese man’s condition turned for the worse and he had to be intubated – a medical procedure employed when a patient can no longer breathe on his own without assistance.

Then panic and chaos ensued at the Manila-based public hospital when the patient died of the infection.

The healthcare workers, who had been treating the two infected patients from Wuhan, had to be quarantined themselves, forcing other medical staff to work overtime. 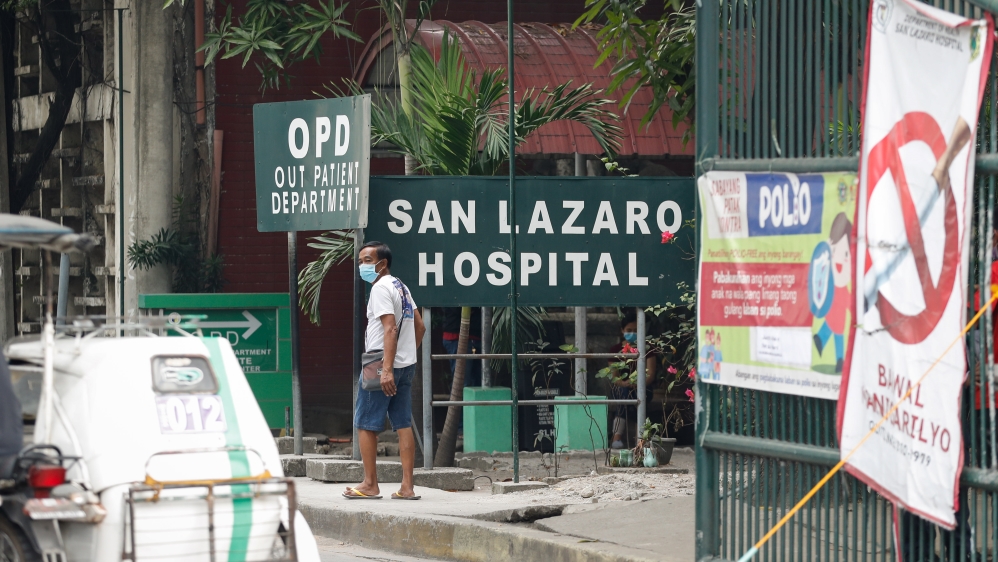 Some of the health workers simply broke down in tears due to exhaustion and anxiety over the spread of the virus, they told Al Jazeera.

Another nurse at the same hospital said there are standard protocols for the handling of new and emerging diseases. But quick turnaround of health workers, who seek higher-paying jobs in other hospitals or outside the country, makes it difficult to implement the policy.

“Health authorities also need to take the emotional and psychological preparedness of health workers into consideration,” said the staff nurse.

At another public hospital in Manila, two nurses in the general admission ward are assigned to take care of about 100 patients during their shift. The hospital is also preparing one of its wards to be a quarantine area.

Their supervisor showed to Al Jazeera a mask that they use as protective gear from the virus.

“It’s as thin as tissue paper. It can probably only mask bad breath,” she scoffed. “But we don’t have a choice, this is all we have. We wear two masks at a time.” 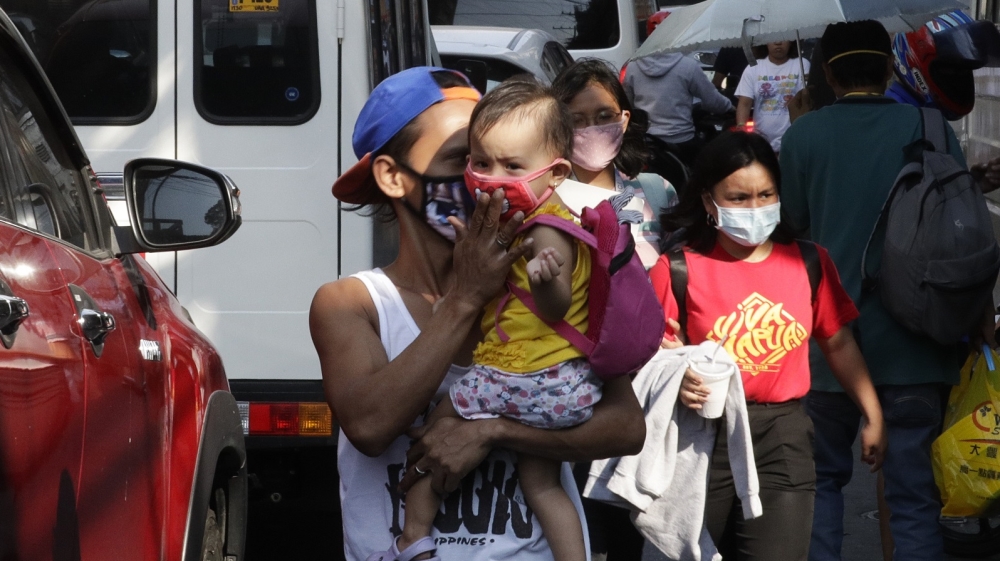 Despite criticisms, the Philippine government has assured the public that is is prepared to deal with the coronavirus outbreak [Aaron Favila/AP]

“The DOH is prepared. But what we are seeing is the virus is infecting people faster. Despite the challenges, the overstretched workforce of health workers and limited resources, we have contained the infections and prevented any cases of local transmissions,” said Alethea De Guzman of the Department of Health’s Epidemiology Bureau.

According to estimates the doctor-to-patient ratio in the Philippines is one doctor per 33,000 patients, and one hospital bed is available to every 1,121 Filipino patients.

“We understand the anxiety that our health workers are feeling. But we also have to consider that there is a shortage of personal protective equipment worldwide because of the global epidemic outbreak,” de Guzman said, adding that the government is trying to secure more supplies and protective equipment despite a global shortage.

A health worker in a public hospital in Manila shows the mask they use. “It’s as thin as tissue paper…just enough to mask bad breathe.”

Public health workers say the COVID-19 virus is weighing heavily on the battered public health system. My report on @AJEnglish coming up. pic.twitter.com/j2YQInueXM

But the additional budget allocation came on the heels of the health department’s 2020 budget being cut by 10 billion Philippine pesos ($197m).

Several legislators criticised the move saying that the country is already struggling to cope with the recent successive outbreaks of dengue and measles and the resurgence of polio.

Jocelyn Santos-Andamo, the secretary-general of Filipino Nurses United (FNU), a national union of nurses, said in general, the government does not treat health as a priority.

FNU and the Alliance of Health Workers, a union of government and private health workers, have been holding protests demanding for adequate protective gear for nurses and an increase in their minimum monthly salary currently pegged at 16,000 Philippine pesos ($320).

The World Health Organization (WHO) said that the Philippines has improved its healthcare capacity over the years.

“We can see that by how they have successfully contained three individual cases of COVID-19 and prevented it from infecting others,” said Dr Rabi Abeyasinghe, WHO Representative for the Philippines.

“Looking at the global trend, we need to prepare for a possible large scale community outbreak” where the virus is transmitted from person to person,” Abeyasinghe added.

But the staff nurse at the infectious diseases hospital shrugged her shoulders and sighed at the news.

“I don’t know anymore. Times like this the only thing you can do is pray – and I’m not even a religious person.”

A coronavirus patient refused to quarantine, so deputies are surrounding his...

No Joke: Trump Really Does Want To Buy Greenland – NPR

Did Trudeau help or hinder flood-relief efforts in an Ottawa neighbourhood?...

These are the stock sectors you want to buy when the...

Before and After Photos Show How Jenna Jameson Lost 80 Pounds...