In offering tribute to Toni Morrison, speakers from Oprah Winfrey to Fran Lebowitz have each shared a very different, but equally special portrait of the late Nobel laureate, who died in August at 88.

Angela Davis remembered a dear friend who as a Random House editor helped launch her writing career and would jot down notes for what became the classic Song of Solomon as she cooked eggs for her family.

Lebowitz marveled at Morrison’s seemingly photographic memory of the bad reviews she had received. Poet Kevin Young once went to the cinema with her and otherwise proudly sat at her feet.

Winfrey spoke of Morrison’s majestic, sometimes intimidating presence, and of the complexity of her work, novels such as Beloved for which a single reading was not enough. She also acknowledged that her heroine, so down to earth on some occasions, was well aware that she really was Toni Morrison.

“She told me once, ‘I’ve always known I was gallant,'” Winfrey confided to thousands gathered at sundown at Manhattan’s historic Cathedral of Saint John the Divine, where more than 30 years earlier Morrison had been among those saying goodbye to fellow author James Baldwin. “Who says that? Who even goes there?”

With its massive rose window and nave ceiling reaching more than 30.4 meters (100 feet), the cathedral was suitably grand for an author who may well endure as the essential US literary voice of her time, one who universalised the stories of black Americans and raised US prose to poetic heights.

Attendees were young and old, of diverse genders and races, members of the publishing world and longtime fans. They filled the front seats, and the back seats. Some sat quietly through the roughly 100-minute ceremony, others murmured, affirmed and cheered out loud. 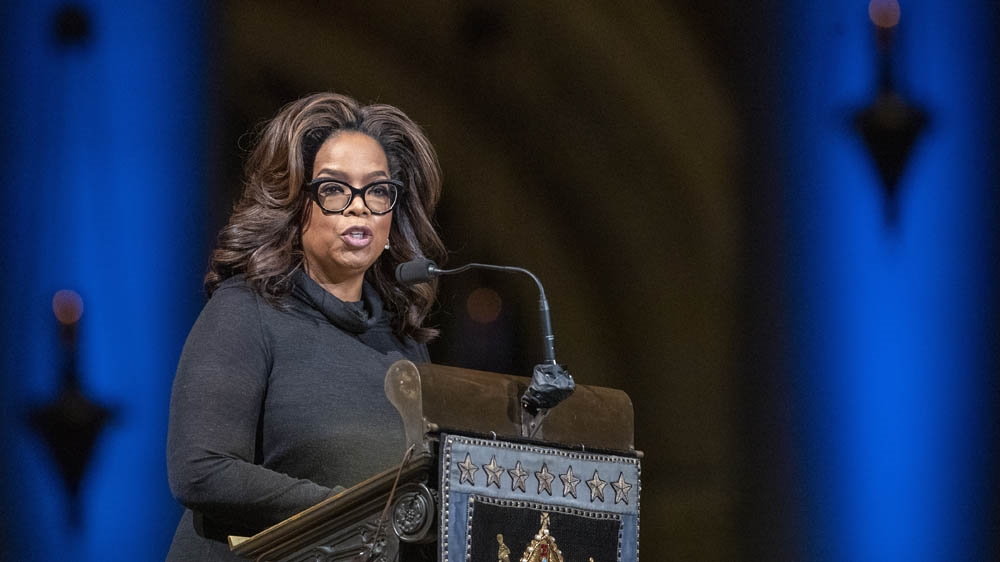 Speakers stood in the cathedral’s pulpit and hailed the spirit of Morrison. Jesmyn Ward, a two-time National Book Award winner, outlined the long history of how black people had been robbed and usurped and called Morrison a kind of prophet who found a wandering people “in the desert of the self” and saved them, deeming them “worthy to be heard.”

Author Edwidge Danticat, fondly speaking of Morrison’s smoking a cigarette at the Louvre in Paris, noted her identities as a mother, grandmother, sister, editor and teacher, and now, in her passing, an ancestor.

‘Black is beautiful, but it ain’t always pretty’

Ta-Nehisi Coates, not even born when Morrison published her debut novel The Bluest Eyes, acknowledged his jealousy that some got to know her so well.

Morrison’s impact on him was through her printed words. He spoke of being startled by the landmark Black Book, a scrapbook of black US life that his father kept in the family’s bookstore in the 1970s.

He praised the economy and poetry of her language, her sense of humour and the wisdom of what he called “grown-folks literature.”

Coates, 44, best known for his prize-winning meditation on race and police violence Between the World and Me, called Morrison a challenge for other writers, the “queen of them all.” One of her messages was, he said, “Black is beautiful, but it ain’t always pretty.”

Words on Thursday were interspersed with music, from the dreamlike saxophone solo of David Murray to singer-pianist Andy Bey’s reflective take on Someone to Watch Over Me. But the deepest music was in the words of Morrison, in a passage from Song of Solomon – selected by Winfrey – about the power and possibility of land.

“‘You see?’ the farm said to them. ‘See? See what you can do? Never mind you can’t tell one letter from another, never mind you born a slave, never mind you lose your name, never mind your daddy dead, never mind nothing. Here, this here, is what a man can do if he puts his mind to it and his back into it,'” Winfrey read, her voice rising into a fierce chant.

Australia in the grip of flash floods and bushfires

Jennifer Lopez Might Be Quietly Planning a Big Career Move –...

This ‘roasting’ of Caernarfon is brutal – and people aren’t impressed...

Neville irritated with Americans over World Cup hotel visit – The...

Volkswagen plans to take on Tesla’s Model X in China –...

Could Brexit put an end to peace in Northern Ireland?

With 37 days until Brexit, why are UK politicians defecting?