Johannesburg, South Africa – One week into a nationwide lockdown, South Africa is scrambling to set in motion an ambitious track-and-trace programme to identify people who may have contracted the new coronavirus as infections begin to proliferate across informal settlements in the world’s most unequal society.

The country confirmed its first coronavirus case on March 5, and in the weeks that followed infections were mostly confined to suburban areas and largely involved travellers from Europe, the United States and other countries.

However, the situation is rapidly changing. Earlier this week, officials confirmed the first coronavirus infections in the huge, sprawling townships of Alexandra and Khayelitsha in Gauteng and the Western Cape, respectively.

And although South Africa’s confirmed figures are still relatively low (1,462 cases and five deaths), the arrival of the virus in crowded urban areas – where access to clean water for hand-washing is scarce and self-quarantine practices are challenging – holds the potential for a much larger outbreak.

“The small growth in numbers may be the calm before a devastating storm. We need to be aware that there may not be many further warnings before the pounding descends.”

Along with the enforcement of the three-week lockdown to slow the spread of the coronavirus, the government has rolled out a series of sweeping measures, including travel restrictions, school closures and bans on mass gatherings.

So far, almost 50,000 people have been tested across the country, and authorities are mobilising 67 mobile testing units to ramp the figure up to 30,000 people daily.

Meanwhile, the recently unveiled track-and-trace programme will see up to 10,000 health workers descend on various communities across the country to trace primary contacts and ensure testing for secondary contacts.

It is hoped the scheme will delay and, at best, prepare for a predicted onslaught South Africa’s health system will confront in the face of a severe outbreak.

“We can’t predict how this virus will spread in African countries where the age demographic is quite different to that of Europe. Social conditions make distancing very difficult and the risk of household spread is very high.”

The continent’s youthful population – with a third of all Africans under 30 years – should be a boon in the fight against a virus shown to affect older people disproportionately more. But as societies across Africa already battle pre-existing conditions such as diabetes, tuberculosis and HIV on a large scale, any advantage could be outweighed in the long run.

The track-and-trace system is being developed by the government alongside the country’s National Institute for Communicable Diseases (NICD) and the Council for Scientific and Industrial Research (CSIR). It takes into account South Africa’s particular experiences in dealing with one of the highest HIV/AIDS infection rates in the world.

Currently, 7.7 million people live with HIV in South Africa, a country of some 57 million. HIV prevalence among the adult population stands at 20.4 percent.

This has led the country to develop the largest state-sponsored HIV/AIDS treatment in the world, primarily providing Antiretroviral Treatment (ART) to those living with the disease. In 2017, South Africa invested more than $1.54bn to run its HIV programmes. The success of South Africa’s ART programme increased national life expectancy from 56 years in 2010 to 63 years in 2018.

“South Africa’s experience in dealing with HIV and AIDS means the country is well prepared for this,” said Rees, referring to the coronavirus pandemic.

“The ability to focus treatment on those communities which need it most alongside the institutional memory the health system has in contact tracing will be very important.”

The World Health Organization defines contact tracing as the identification and follow-up of persons who may have come into contact with an infected person. 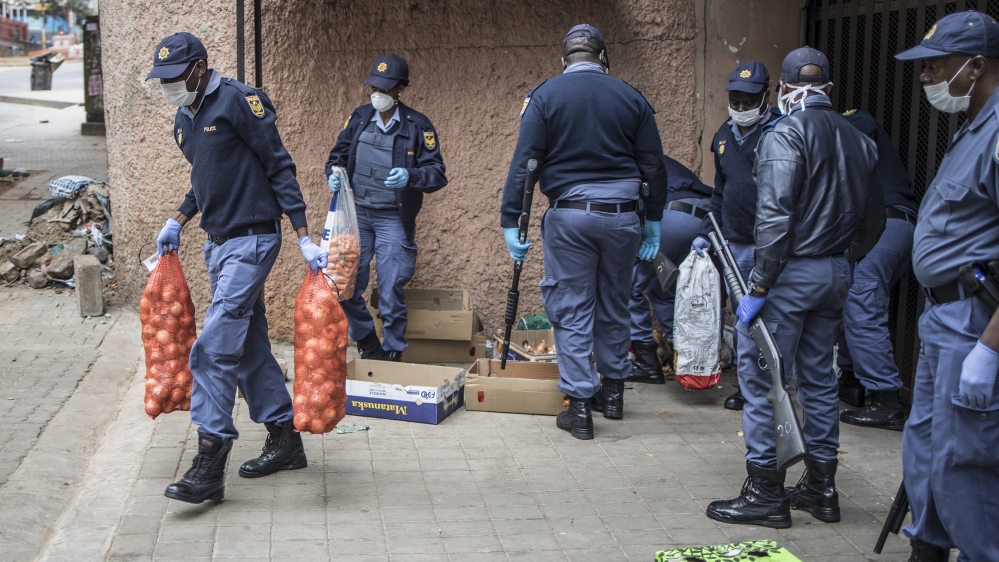 The novel coronavirus causes a highly infectious respiratory disease called COVID-19 that in severe cases can ruin a patient’s lungs.

In South Africa so far, the capacity of both the country’s public and private healthcare sectors has largely been able to cope with the number of infections. But according to Professor Alex van den Heever, a health economist at the University of the Witwatersrand, there are just 1,178 intensive care unit (ICU) beds in state hospitals and 2,140 in private hospitals across the country, with each being equipped with life-saving ventilators.

“Right now, there are adequate ventilators. We need to have them in reserve – we can’t just go manufacture some when we need it,” Mkhize said.

“It’s all about forward planning – we must be prepared.” 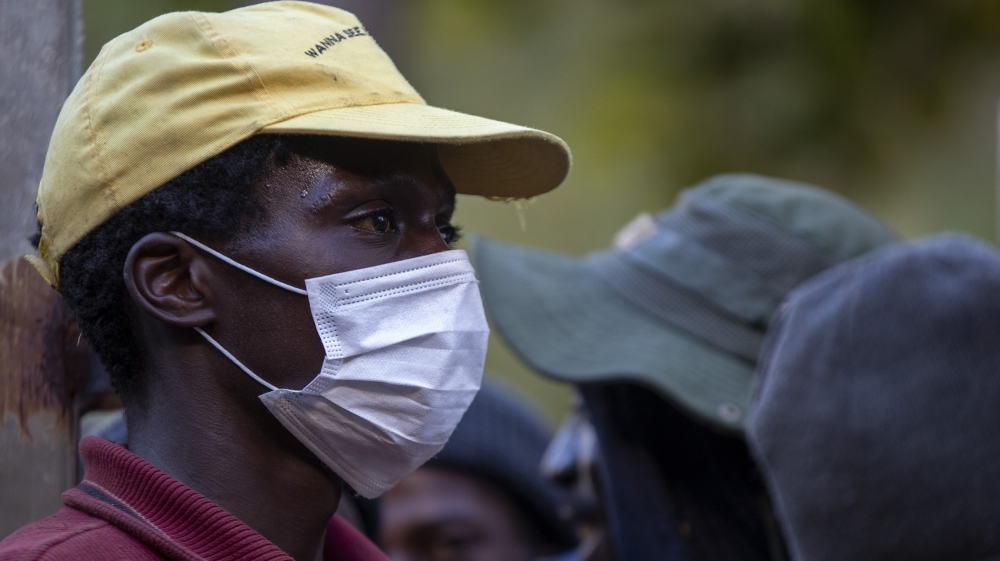 Homeless people queue for a meal and shelter in Hillbrow, Johannesburg [Themba Hadebe/AP]

Meanwhile, attempts to enforce a three-week lockdown that began on March 27 have turned violent, especially in densely populated communities.

Police and the army used whips, rubber bullets and tear gas throughout the first week to disperse people who were not heeding the call to self-isolate at home or respect social-distancing in Hillbrow, an inner-city Johannesburg neighbourhood.

“What home must we go to if we live on the street?” asked Thulani Nkomo.

The Zimbabwean immigrant was one of the thousands of homeless people cajoled off the streets by army and police officers and transported to open fields, empty school grounds and stadiums where makeshift shelters have been set up across the city to enforce social distancing.

The 21-day shutdown by government to quell the spread of the coronavirus is also having a disastrous effect on an economy that was already in the midst of a recession before the outbreak. All industries except those deemed to be essential in maintaining food supply, security and basic services such as water and electricity have been forced to close. Compounding the challenging situation is the high unemployment rate, standing at 29.1 percent.

“We are looking at the biggest economic decline since at least 1937,” said economist Mike Schussler.

“There could be a year-on-year real GDP decline of 6.5 percent and possibly up to four million jobs being at risk in both the formal and informal sectors.”

Coronavirus ‘past peak’ in Russia, WWII parade in June: Putin

‘Marvel’s Spider-Man’ Players Are Recreating ‘Into the Spider-Verse’ Moments – Comicbook.com

What’s the future of abortion rights in Mexico under AMLO?

Iran slams ‘terrorist’ raids by US on Shia militia in Iraq,...