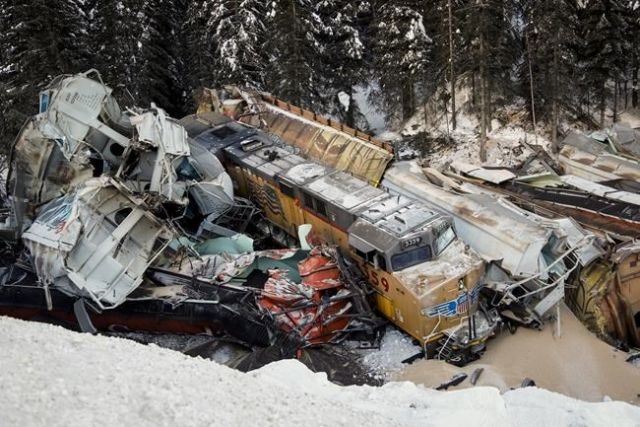 A Canadian Pacific freight train parked on a frigid night in the Rocky Mountains began to move on its own before a derailment that killed three workers and sent 99 grain cars and two locomotives off the track.

The Transportation Safety Board says the westbound train had been parked on a grade with its air brakes applied for two hours near Field, B.C., just west of the Alberta-B.C. boundary, when it started rolling. The handbrakes were never applied.

“It was not anything the crew did,” senior investigator James Carmichael said Tuesday. “The train started to move on its own.”

He said the Calgary-based crew was taking over the train east of Field on Monday because the previous workers were nearing maximum work hours. The new crew was not yet ready to depart when the train started moving around 1 a.m.

It barrelled along for just over three kilometres before it derailed at a curve ahead of a bridge over the Kicking Horse River. Only 13 cars and the tail-end locomotive remained on the tracks.

“The lead locomotive came to rest on its side in a creek and a number of derailed cars came to rest on an embankment,” said Carmichael. “The remaining cars, including the mid-train remote locomotive, piled up behind.”

The crew was in the lead unit, which was severely damaged. Carmichael said the data recorder had not yet been retrieved from that locomotive.

“This territory’s among the most challenging railway territory in North America,” said Carmichael. “Investigators and others are working hard under challenging circumstances to fully understand what went so terribly wrong.”

Investigators say a Canadian Pacific freight train was parked and began to move on its own before it derailed and killed three crew members on the Alberta-British Columbia boundary.

The board says the crew had just boarded the train, but weren’t yet ready to depart.

The TSB says the train gained speed well in excess of the 32 km/h maximum for the tight turns in the mountain pass.

Some 99 cars carrying grain and two locomotives derailed at a curve ahead of a bridge.

The three crew were all in the lead locomotive, which plunged into a river.

– with files from The Canadian Press

The Transportation Safety Board of Canada is expected to hold a news conference this morning. Further details on the horrific crash that claimed three lives are expected to be released after a CP Rail train went off the tracks near Field, B.C., on Monday.

We know the train was headed westbound towards Vancouver when it derailed between the Upper and Lower Spiral Tunnels just east of Field about 1 a.m. Monday.

All three crew members who lost their lives were from Calgary and have now been identified as conductor Dylan Paradis, engineer Andrew Dockrell and trainee Daniel Waldenberger-Bulmer. 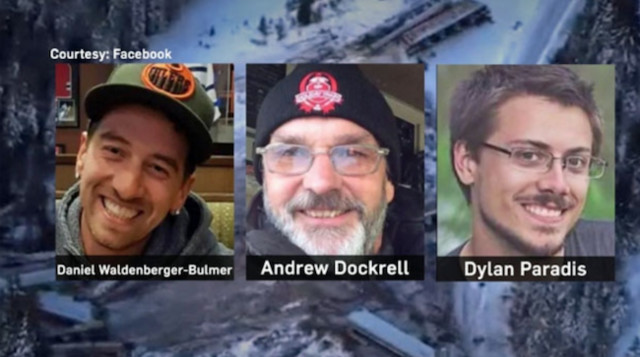 Between 40 and 60 cars jumped the tracks and plunged more than 60 metres from a bridge into the Kicking Horse River.

CP released a statement Monday afternoon, ‘Our entire railroad family mourns this tragic loss’ and that it is a ‘tragedy that will have a long-lasting impact on our family of railroaders,’ says president and CEO, Keith Creel.

A GoFundMe page has been established to help support the families of the dead crew members:

“Please donate to help the families of the employees that have passed away on the Field hill.  Anything that will help them through this difficult time, and afterward,  will be greatly appreciated.

We are railway employees out of Calgary and we all worked with these men on a daily basis.  We need to do all we can to take care of these men’s families.  The funds raised are 100% going to go to their families to help them with whatever they need.  The funds will be distributed with the Unions involvement to ensure that this is done fairly.”

The TSB will provide an update on the investigation from Calgary at 11:00 a.m. MT.

-with files from CTV News

Lady Gaga rips Mike and Karen Pence: “You are the worst...

Legal worries for Trump far from over after Mueller probe

U.S. Congress pushes ahead on Trump impeachment with nation split |...