All it should take to scare off a team from considering something risky in the NFL Draft is six simple words: The Browns tried that three times.

Perhaps no NFL franchise has a worse draft record in the 2000s than the Browns, who have used the second of two first-round picks on a quarterback three times in the last 12 drafts.

Each time resulted a disaster. 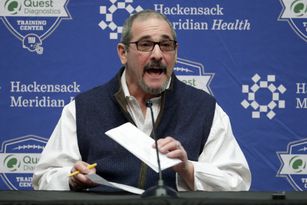 NFL Draft 2019: Do Giants need Hall of Famer at No. 6? How Dave Gettleman’s ‘gold-jacket’ test applies after Saquon Barkley

New York Giants’ Dave Gettleman had to draft a Hall of Famer with the No. 2 pick, so he took Saquon Barkley in 2018.

And while that history doesn’t mean it will be a disaster if the Giants opt to pass on a quarterback with the No. 6 pick and take one with the No. 17 pick, it at least serves as a cautionary tale.

The Giants and Browns already are sharing enough company.

They are tied for the most losses in losses over the last two NFL seasons combined (24). They drafted No. 1 (Browns’ Baker Mayfield) and No. 2 (Giants’ Saquon Barkley) in 2018. They are the two places Giants coach Pat Shurmur has called the shots in his career.

But here is a closer look at the Browns’ results when delaying their quarterback pick, a connection the Giants do not want:

No. 3 OT Joe Thomas: Thomas is headed to the Hall of Fame one day. The 10-time Pro Bowler played 10,363 straight snaps to start his career but retired without ever playing in the postseason after his 11th season was cut short by injury.

No. 22 QB Brady Quinn: Quinn was the second quarterback taken, after No. 1 overall pick Jamarcus Russell. He was 3-9 as a starter for the Browns and was out of the NFL after four seasons. Eight picks between No. 21 and No. 32 went to at least one Pro Bowl.

No. 3 RB Trent Richardson: Quarterbacks Andrew Luck and Robert Griffin III went back-to-back ahead of Richardson, who rushed for 950 yards and 11 touchdowns as a rookie. He played in two games the next season and was traded to the Colts, where he rushed for 978 yards over two seasons. He played in the Alliance of American Football earlier this year.

No. 22 QB Brandon Weeden: With Shurmur as head coach, the Browns failed to trade up for RGIII and passed on Ryan Tannehill (No. 8 to Dolphins) to take Richardson. But they circled back with the 28-year-old Weeden, a former minor-league baseball player. He went 5-15 in two years for the Browns before he was cut.

No. 8 CB Justin Gilbert: Every selection from No. 5-17 has made at least one Pro Bowl — some are on a Hall of Fame path like Zack Martin, Beckham and Aaron Donald — except Gilbert. He had 42 tackles and one interception in 35 career games, including 23 with the Browns. He was cut by the Steelers and suspended one year for violation of the NFL’s substance abuse policy in 2017.

No. 22 QB Johnny Manziel: The Heisman Trophy winner actually made fewer starts than Quinn and Weeden. He went 2-6 as a starter and had teammates questioning his commitment. He was investigated for a domestic abuse incident and released in 2015 for continued disregard of the Browns’ on-field and off-field expectations. He played in the Canadian Football League and AAF.

What’s just as bad as that record? In 2017, the Browns had the No. 1 pick and three first-rounders but they passed on Pro Bowlers Deshaun Watson (Texans) and Mitchell Trubisky (Rams) and MVP Patrick Mahomes (Chiefs).

It appears they finally have their franchise quarterback by finally using their first of multiple first-round picks on Mayfield in 2018. Cornerback Denzel Ward was the other.

Kareem Abdul-Jabbar Donating 1,800 Safety Goggles, ‘Look As Good As I Did!’ – TMZ

Andy Reid on the Chiefs’ Divisional Matchup with the Colts: “You...