Vijay Chauthaiwale, the chief of the BJP’s foreign affairs department, said on Friday there was “a lot of problem” with the newspaper’s coverage of India, but did not give any specific examples.

The swipe at the Post, owned by Amazon founder Jeff Bezos, came a day after a cabinet minister gave short shrift to Amazon’s plans to create a million jobs in the country by 2025.

Bezos has praised India during his ongoing visit, saying the 21st century will be the Indian century and that the dynamism and energy in the country was “something special”.

“I am not opposing Amazon as a company. In fact, I am a regular customer … Jeff Bezos should go home tell Washington Post what is his impression about India,” Chauthaiwale told Reuters news agency. 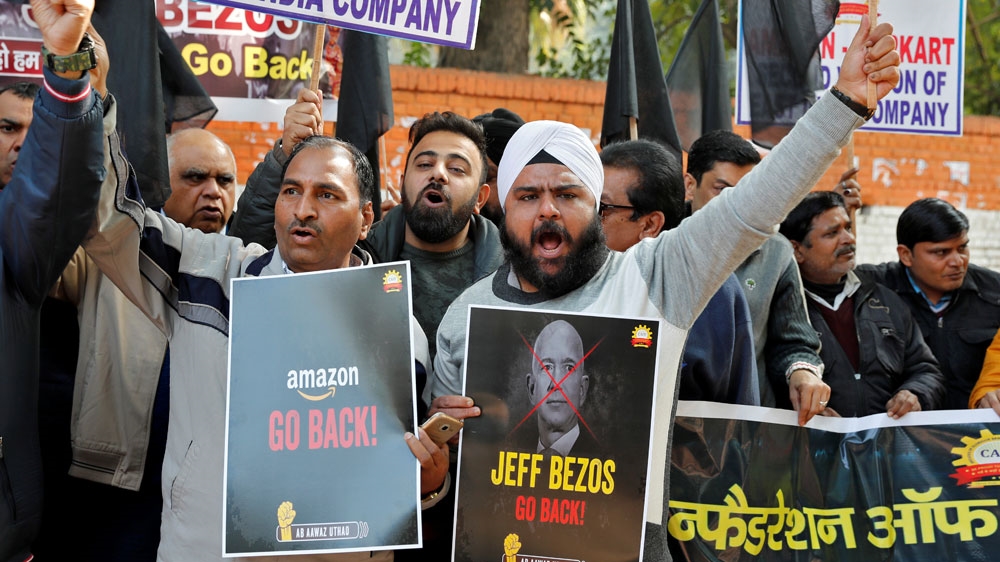 Amazon has been compared with British East India Company, which ruled over India in the 19th century [Adnan Abidi/Reuters]

The Washington Post’s India bureau chief, Joanna Slater, referred a Reuters request for comment to the newspaper’s spokespersons in Washington, DC, who did not immediately respond outside regular business hours.

Amazon too did not respond to an email seeking comment on Chauthaiwale’s remarks.

Re-up of the complete thread on @washingtonpost‘s Kashmir coverage. https://t.co/AVbaA3ltS2

Chauthaiwale has in the past been critical of foreign media’s reporting on political issues, including on the disputed region of Indian-administered Kashmir, claimed by both India and Pakistan, saying the coverage has been biased against Modi.

The Washington Post has in the past been attacked by Saudi Arabia for its coverage in the wake of the murder of journalist Jamal Khashoggi that caused a global outcry.

Months after Khashoggi murder, Amazon chief’s private messages and photos were leaked to a tabloid. An investigation later revealed that Bezos’s phone was hacked at the behest of Riyadh.

The comments by the BJP leader come when the Indian government is increasingly attacking e-commerce firms in light of concerns raised by India’s brick-and-mortar retailers. It has created a public relations nightmare for Amazon during the billionaire businessman’s visit.

India’s shopkeepers have represented a core constituency for the BJP since the early days of the party. And sources told Reuters that Modi, who has otherwise courted foreign investors, was unlikely to meet Bezos during his visit despite repeated requests by the company in light of traders’ concerns and the continuing antitrust probe.

Small businesses say they have been hit by Amazon and Walmart’s Flipkart which flout regulations and burn billions of dollars to offer steep discounts. The companies deny the allegations and say they comply with all laws.

He added that a recently announced India antitrust investigation of Amazon and Flipkart to look at the allegations of deep discounting and whether the firms discriminate against small sellers were “an area of concern for every Indian”.

US prisoners to be confined to cells for two weeks

For Trump, MAGA crowd is more important than any trade deal