Russian investigators have raided opposition offices across the country, in the latest move to increase pressure on government critic Alexei Navalny and his allies.

The raids on Tuesday, which investigators said were linked to suspicions of financial crimes, followed similar mass searches last month and came less than a week after Navalny’s Anti-Corruption Foundation (FBK) was declared “a foreign agent”.

Opposition leaders have denounced the moves as attempts to intimidate them after a summer of protests and significant losses suffered by Kremlin allies in a Moscow municipal election in September.

Russia‘s Investigative Committee said in a statement that searches were under way at FBK offices in 30 Russian regions, as well as at residences of the group’s regional employees.

The committee has repeatedly accused Navalny’s foundation of financial crimes, including money laundering and accepting illegal donations, and has frozen its accounts.

Navalny’s group, which often publishes investigations into top state officials, said on Twitter that the raids started at 6am (03:00 GMT).

“The ‘law enforcement system of Russia’ is using all of its efforts to protect corrupt officials and bribe takers,” it said.

FBK employees said the foundation’s offices in Moscow were also being raided. 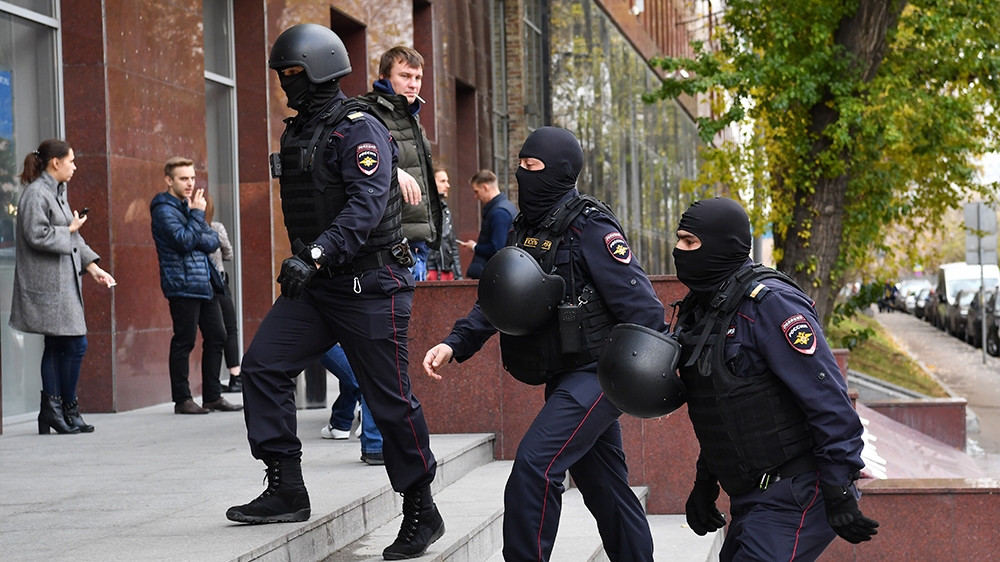 While barred from mainstream politics, Navalny has worked to expose the wealth of Russia’s elite, broadcasting the findings of investigations to millions on social media.

In August, Russian investigators launched a money-laundering probe into FBK, accusing it of taking money that was procured illegally.

Last month, investigators raided dozens of Navalny’s regional offices, as well as the homes of his supporters, following mass opposition protests in Moscow this summer.

Navalny blamed the raids on Kremlin “hysteria” sparked by the ruling party’s losses in local elections last month. He said police searched more than 200 addresses in 41 cities across Russia.

Allies of President Vladimir Putin suffered major losses in the Russian capital during the September vote.

Navalny organised the protests after popular opposition politicians were barred from standing in the Moscow parliament election.

“Shameless bastards from the Kremlin are seeking revenge for ‘Smart Voting’ and trying to destroy a network of our offices,” Lyubov Sobol, one of the Navalny allies barred from the vote, said on Tuesday on Twitter.

Naga Munchetty says she stands by her Trump comments – The...

The death of Sidney, Nebraska: How a hedge fund destroyed ‘a...

Review: Wales in Edinburgh – Festival round up – Nation.Cymru

The Bulls’ shopping of Jabari Parker is an admission that the...

California to provide healthcare to some undocumented immigrants