Police are appealing for information after a man used a digger to destroy the reception of a new Travelodge hotel on the day the building was due to be completed.

Footage which has gone viral online shows the vehicle repeatedly smashing into the hotel on Edge Lane, Liverpool, which was under construction.

“The handover was today, everything completed, we’d put the last tile in, cleaned up and made sure everything was perfect,” ceiling fixer Samuel White, 24, told the Press Association on Monday.

“Then some idiot in a mini digger decided to drive through the middle of the building.” 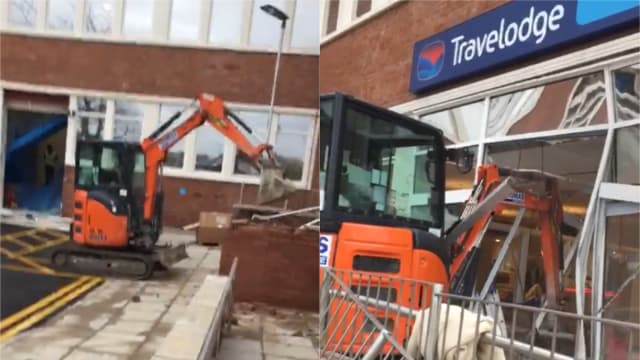 There were construction workers inside the hotel at the time and Merseyside Police said one man was treated for eye irritation due to exposure to diesel, but did not believe anyone else was injured.

Mr White repeated claims made by many on social media that the driver of the digger was angry over a pay dispute said to involve £600.

He said the destruction, which started shortly before 3pm, went on for “a good 20 or 30 minutes” before the driver left the vehicle and ran off.

“There were loads of workers outside all gobsmacked, jaws to the floor wondering what’s going on,” said Mr White.

“The site manager was running around like a headless chicken, he wasn’t happy at all.”

No. 1 Nebraska volleyball drops four-set match No. 2 Stanford in...

Coronavirus: How should China’s handling of the crisis inform our response?...

Hurricane Dorian: Storm strengthens as it heads for Florida

Four companies have recalled more than 165,000 infant incline sleepers due...