Jorge Juc left the house before sunrise last Thursday. While he tended his cornfield in eastern Guatemala, the 77-year-old indigenous Maya Q’eqchi’ community leader was killed in a machete attack.

Juc was president of the village chapter of the Campesino Development Committee (CODECA), a national indigenous-led social movement organisation working for land rights, a plurinational state, energy nationalisation and other issues.

Four CODECA-affiliated community leaders have been killed this month alone, all in the municipality of Livingston, in the Izabal department. Izabal is home to mining operations, oil palm plantations and decades of Maya Q’eqchi’ community displacement.

Isidro Perez and Melesio Ramirez were killed on July 5 when more than a dozen armed men opened fire on participants in a land rights action. Julio Ramirez was shot multiple times on July 12 and died the next day.

The situation is dire, said Jorge Santos, executive director of UDEFEGUA, a Guatemalan human rights organisation. As part of its work, the group documents attacks against rights defenders and the broader context behind them.

Guatemala is now among the most dangerous countries in the world for land and environmental activists. According to the group which is based in the United Kingdom, the country experienced a fivefold increase in the number of murders of land defenders between 2017 and last year, with 16 deaths, making it one of the bloodiest countries per capita.

Meanwhile, 30 land and environmental defenders were killed in the Philippines, 24 in Colombia, 23 in India and 20 in Brazil.

‘A major setback for human rights’

Most of the Guatemalan land and environmental activists killed were indigenous. Many were community leaders affiliated with CODECA and CCDA, the Campesino Committee of the Highlands.

Three natural resource rangers in the Izabal department were killed in two incidents in March 2018. They worked with the Foundation for Eco-Development and Conservation, FUNDAECO, a non-governmental group that co-manages some protected areas.

“In general, the surge in killings is because Guatemala is witnessing a major setback with regard to democracy and human rights,” Santos told Al Jazeera.

The United Nations-backed International Commission Against Impunity in Guatemala, CICIG, played a key role in strengthening judicial independence and cracking down on high-level corruption. But Guatemalan President Jimmy Morales has all but shut down the commission, which will cease operating in September.

Corruption and impunity can create conditions for extractive industries to thrive, said Santos. The judicial system has been taking on corruption and also addressing natural resource project licences granted without due process, he added. 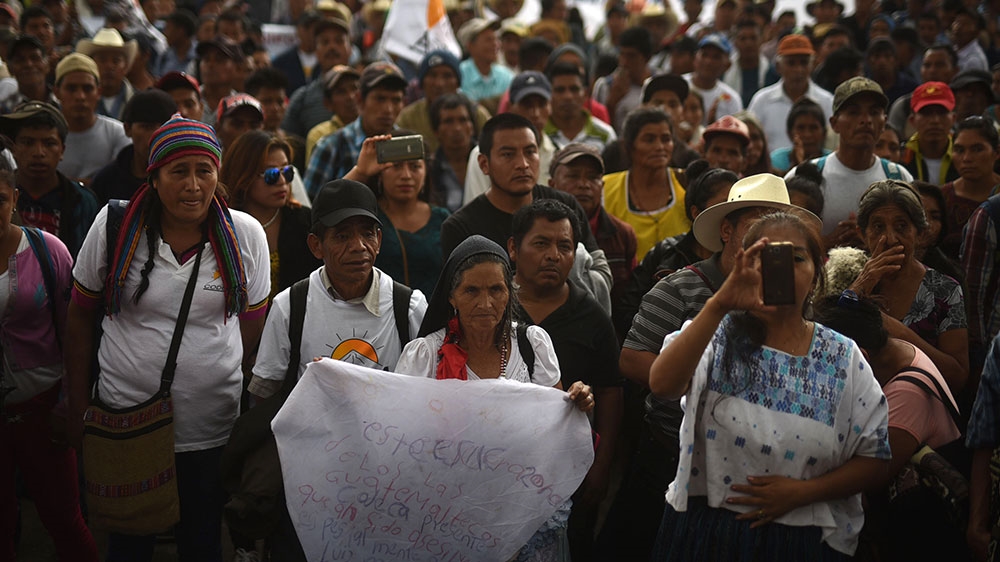 In recent years, the Constitutional Court has suspended several mining and energy projects for their authorisation without adequate prior consultation with affected indigenous communities.

The advances and rulings provoked an authoritarian backlash that has included violence and repression against communities and activists, Santos said, adding that this is compounded by the rhetoric coming from the president’s office.

“The president and other high-level officials in all three branches of government have committed acts that could be considered incitement to violence and hate speech,” he said.

In two speeches on April 27 and May 2, 2018, Morales railed against activists and groups, including CODECA. A CODECA-affiliated leader was killed one week later, on May 9, and CCDA-affiliated community leaders were killed May 10 and 13.

“That’s how a spate of killings began that peaked in May and June but then continued,” Santos said.

A spokesperson for Morales did not respond to Al Jazeera’s request for comment at the time of publication.

‘Building for a long time’

“This is kind of a crisis that has been building for a long time,” Global Witness senior campaigner Alice Harrison told Al Jazeera.

In the 1990s, the Guatemalan Army and leftist guerrilla forces were negotiating an end to a 36-year civil war in which the state carried out acts of genocide against Mayan peoples. At the same time, mining and energy companies and international institutions were helping set the stage for more mining and hydro-electric dam projects. 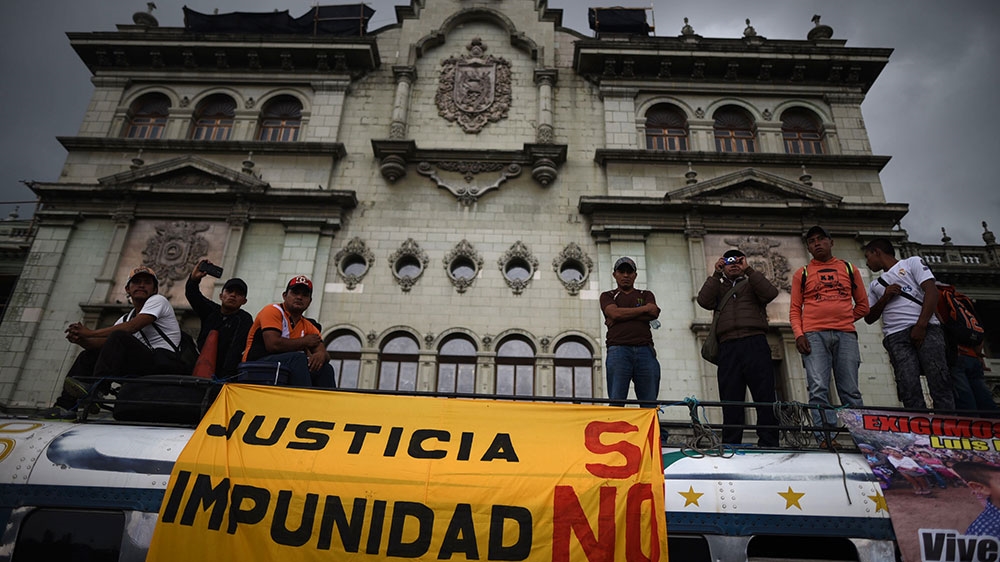 The recent surge in killings in Guatemala stems in part from the past two and a half decades of extractive and energy project licences granted without the free, prior and informed consent of affected communities, said Harrison. It is a global pattern, as are the frequent involvement of state security forces and foreign companies, she added.

“Local communities, often indigenous, are not consulted on what goes on on their land,” said Harrison. “This is more often than not the heart of the problem.”

The Global Witness report, Enemies of the State? How governments and business silence defenders, examines trends and case studies from around the world. As always, the annual report documents killings, but this year Global Witness expanded its focus.

“There is a whole dimension of other threats and attacks people are facing,” said Harrison.

Criminalisation, the use of often trumped-up charges to prosecute or jail community leaders and activists, is part of that dimension. This year Global Witness devoted several sections of its report to criminalisation, including in the UK and Iran.

Simply for demanding our right to defend Mother Earth, we faced hard times. We were jailed.

Cristobal Pop, a Guatemalan land defender, is all too familiar with the phenomenon. The president of the Small-scale Fishers Guild of El Estor, in the Izabal department of Guatemala, Pop has faced criminalisation for the past two years.

“Simply for demanding our right to defend Mother Earth, we faced hard times. We were jailed,” Pop told Al Jazeera.

Guild Vice President Eduardo Bin was locked up for nearly a year, and several other fishers guild members and two local journalists have faced criminal charges, including stints in pre-trial detention in some cases. They are all Maya Q’eqchi’.

The conflict began in early 2017, when the guild formed to protest pollution in Lake Izabal, pointing to nearby nickel mining operations and oil palm plantations. On May 27, 2017, police opened fire on a road blockade action, killing 27-year-old fisherman Carlos Maaz. 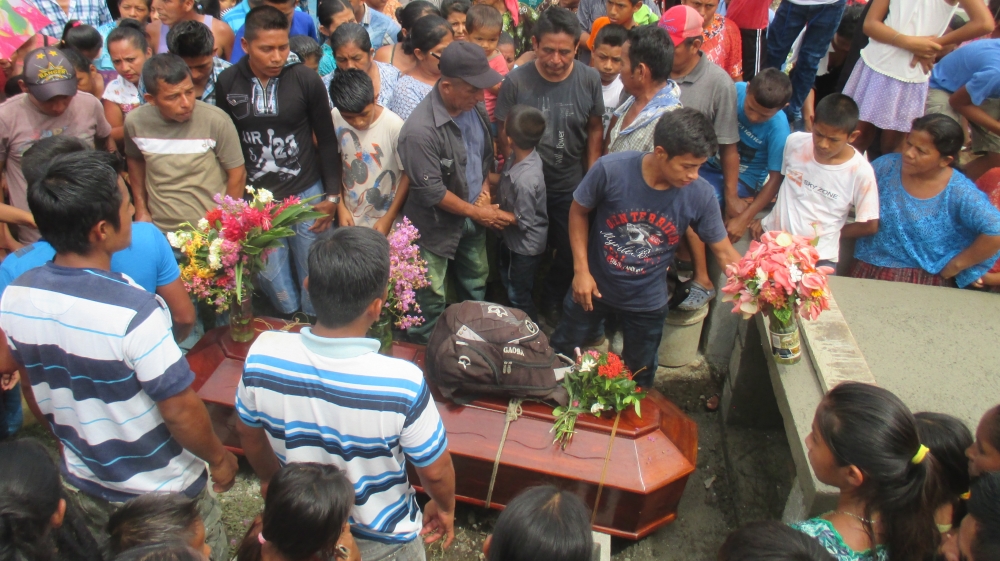 Hundreds of Maya Q’eqchi’ residents of El Estor gather for the burial of Carlos Maaz, a fisherman shot during a May 2017 protest against lake pollution [Sandra Cuffe/Al Jazeera]

Pop and other guild leaders and local journalists were then charged with alleged crimes related to protest actions earlier that year. Pop and several others have another hearing on Wednesday.

Earlier this month, the Constitutional Court temporarily suspended the Fenix nickel mine’s exploitation licence, halting operations while it resolves a legal challenge filed by the fishers guild due to the lack of prior consultation with local Q’eqchi’ communities. Since then, guild leaders have faced increased threats.

“A few days ago, I received two telephone calls with threats. I was sent messages intimidating me,” said Pop. Two of his teenage children went to the market Sunday in El Estor to buy corn and were threatened, said Pop.

Threats, criminal charges, killings and other forms of repression are often interlinked and have the same goal, according to Santos.

“It is a long process that begins with cooptation attempts, threats, intimidation, and attacks. There is a process of stigmatisation and defamation until people are accused and jailed,” he said.

“The backbone of the policy of repression against human rights defenders is focused on two significant kinds of aggression: criminalisation, which kills one’s civilian life; and physical elimination,” said Santos. “In both cases, the central objective is to silence the voices of rights defenders.”

The fight against inequality starts from the streets, not Davos

New mom battles flesh-eating disease: ‘It was eating at my insides’...

UK and Ireland battered by strong winds and torrential rain