Washington, DC – An event in Washington, DC, on Tuesday, billed as the first national gathering of Muslims in politics in United States history, began with a resounding a rebuke of racism and Islamophobia emanating from the White House, and a call for Muslims to become beacons of civic participation.

The conference comes after more than a week of racist attacks on four minority congresswomen, including Ilhan Omar and Rashida Tlaib, the first two Muslim women in Congress.

Organised by the Muslim Caucus, the two-day Muslim Collective for Equitable Democracy 2019 was described by Ghazala Salam, the founder and president of the Muslim Caucus as an opportunity for Muslims to begin building stronger networks for political organising.

“We’re not a monolithic community, not a one-issue community,” said Salam at the start of the event.

Contending that the work of political and community organising in Muslim communities often take place in “silos”, Salam added, “we want to establish a national infrastructure for organising American Muslims.”

“There’s no sideline to be on because this is no game,” said Congresswoman Betty McCollum as she accepted a human rights award from the Muslim Caucus.

“As Muslims, you have been under attack since day one of this administration. We need to stand in solidarity and common purpose,” she said.

Ken Martin, the Chairman of the Minnesota Democratic-Farmer-Labor (DFL) Party, added that today’s Republican Party was no longer that of his father and grandfather but a party of “hate and intolerance” against which the Democratic Party needed to stand as a “bulwark”.

Nevertheless, the Muslim Caucus noted that although Republican Party officials – who were invited – were absent at the conference, the group would continue to reach out to them.

“We wanted to let you know that we made every attempt to invite our Republican partners as well and because of scheduling conflicts they were unable to come; after the conference, we will attempt to reach out to them,” Barber said.

Arriving shortly after the discussion began, Omar received a standing ovation from attendees. Most of the speakers that morning also declared their solidarity with the representative, who has become a target for the ire of Trump and his supporters, who at a recent rally in North Carolina chanted, “send her back”. 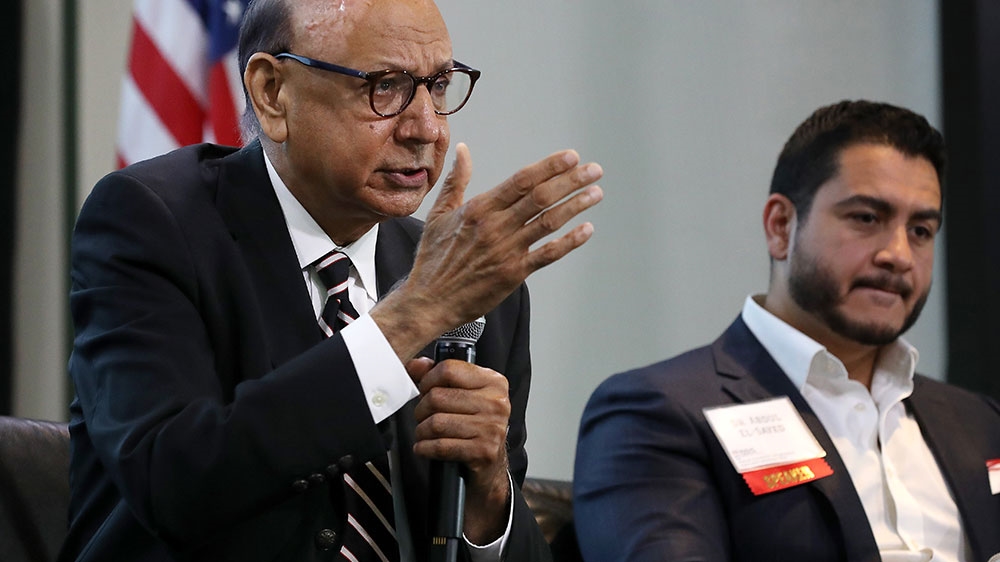 “When we are talking about the president, people will say his remarks are racist and forget the inherent racism that has always been part of him,” Omar said.

“We forget the system of oppression that continues to build and … vilify so many of us to almost eliminate our existence in many aspects of society,” she added. “At least for me, it’s not going to distract me, but I’m going to unmask it. If we don’t push people we’re going to be stuck here for another generation or two.”

One clear aim of the conference was also to clarify that Muslim Americans should enter politics with the aim of being more than defenders of their faith.

“Muslims have been a part of this country from the very beginning,” said Salam as she opened the conference. “We live in this country. Education, healthcare, the economy are important to us.”

Omar was particularly adamant on this point. Responding angrily to an audience member’s question asking her to condemn female genital mutilation, Omar cited her long-standing public history of condemning the practice.

“I want to make sure that the next time someone is in an audience, they will ask the question they will ask of any politician and will not come with the accusation that we might support something that is so abhorrent, so evil, so vile,” she said.

“What we look for and what this whole conversation is about, is that not only do we have internalized fears about what we might believe but that we also don’t have assumptions about what our value basis might be because of where we might come from,” Omar added. “I would like not just for you but for everyone to know that if you want us to speak as politicians, then you treat us as such.”

Minnesota Attorney General Kieth Ellison, who was the first Muslim elected to Congress, said Muslim American legislators should pursue an agenda that includes calling for a Muslim day at each statehouse, voter tabling in Muslim community centres and persuading imams to celebrate political participation as a Muslim virtue.

“There is no universal unity,” he said. “To some, you are the problem. Find the people who agree with you; you need 50 percent of the people in the room and one more, then you’ve won.”

Setting the record straight: Couple hopes their story will help others...

An American Aid Worker Is Being Monitored for Signs of Ebola...

SoftBank’s Masayoshi Son may have gotten more than $3 billion richer...

A simple guide: All you need to know about MPs’ Brexit...