Anyone who owns an iPhone 6S or older, it’s time: you probably need to buy a new phone.

It’s not an emergency, of course. It can wait until the end of your phone contract, or the holidays, or whenever you get a nice little bonus at work.

But when the time comes, don’t put it off.

That’s because in 2018, the new phones are finally a big enough upgrade from the old device that you’ll feel a noticeable difference in your quality of life.

If you have an iPhone that’s a few years old, I don’t need to tell you how terrible your battery life is.

I use an iPhone 6S, and at this point, it’s hard to get to 5 PM on a single charge — I almost always recharge my phone in the middle of the day. And a few weekends ago when it got really chilly outside, my phone started doing that fun thing where it shuts itself off, even with 30% battery left, because the outside temperature is too low.

I’ve only had my phone for not-quite-two-years, so I can’t imagine how grim the battery life is for anyone with an older phone.

When you look at the battery life on any of the three new iPhones Apple unveiled this fall, it feels almost luxurious:

Even last year, there was almost no major, noticeable difference between the camera on the 3-year-old iPhone 6S and the one on the new iPhone 8.

That’s because Apple has added a bunch of upgrades to its recent iPhones, including better low-light performance and a new feature called Smart HDR, which automatically blends together the best parts of separate exposures into one photo.

Say you’re using the iPhone 6S, like I am. Your device has the A9 chip, which at the time, was top-of-the-line. But these days, Apple’s new phones come with an A12 Bionic chip, which Apple promises will give the devices speed and fluidity, the ability to experience augmented reality, and nice-to-have features like depth control when you’re using portrait mode (if you use an older iPhone, your device doesn’t even have portrait mode).

What this means in your day-to-day life is that your phone doesn’t open apps as quickly as it should, it doesn’t switch between pages very fluidly, it’s slow to do things like delete emails or send a picture to someone, and it just all around makes your day a little bit slower.

Up until the iPhone X last year, the iPhone’s design had looked relatively similar for several years. The phones came in black and metallic colors, had a round home button on the front, and relatively large outer boarders, called bezels, around the screen.

But the iPhone X changed all that. Gone was the home button, (mostly) gone were the bezels. Instead, Apple pivoted to a phone that’s front was mostly screen, with a “notch” along the top to house the selfie camera and Face ID sensors.

Apple stuck with that design for this year’s phones, the iPhone XS, iPhone XS Max, and iPhone XR. That means that any phone before the iPhone X — even the iPhone 8, which came out at the same time — automatically looks a little dated.

Design isn’t the most important aspect of choosing a new phone, but sometimes it is nice to feel like you own the latest and greatest.

If you have an older iPhone, it can already do a lot of the things new iPhones can do. That’s thanks to iOS 12, Apple’s latest smartphone operating system, which Apple made available for iPhones as old as the iPhone 5S.

But there are a handful of things your phone can’t do, features that will make your life easier and more convenient:

If none of this matters to you, sure — stick with your old iPhone. But as more times goes on, the issue becomes that Apple won’t repair old devices. In fact, if you own iPhone 4 or 5, your phone is already obsolete. 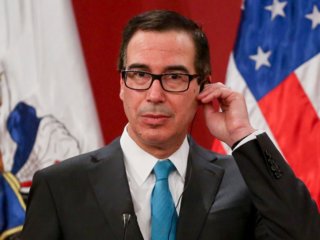 ‘If he’s so good, why is this happening’: Trump reportedly blames Treasury Secretary Steven Mnuchin for recommending Jerome Powell as Fed chair

AEW Double or Nothing wrestling live stream, how to watch online,...