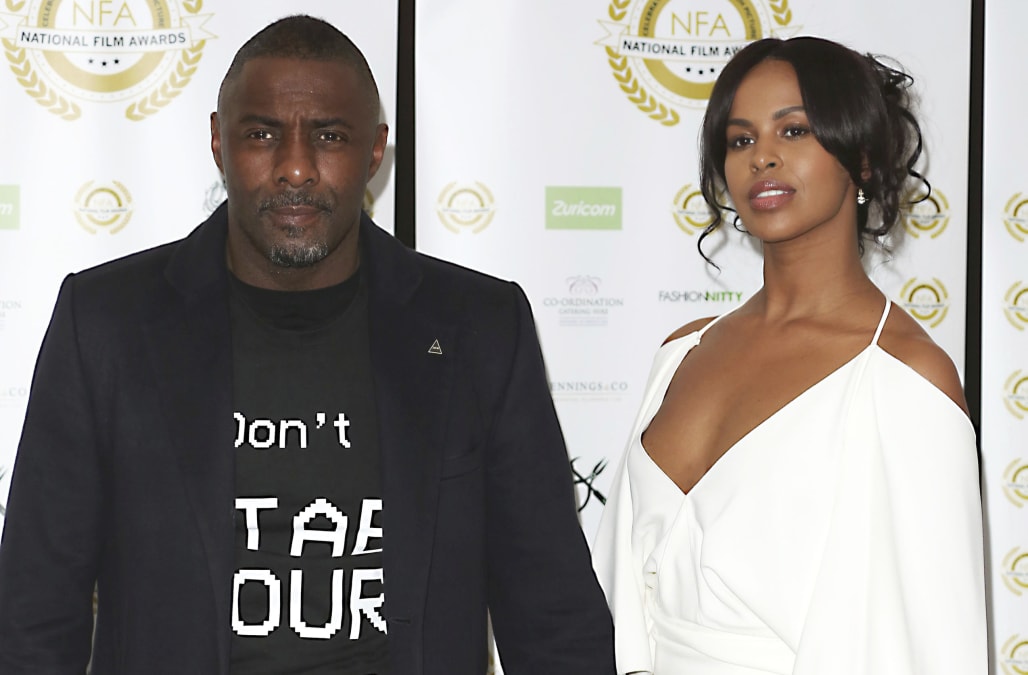 The British actor and Sabrina Dhowre exchanged vows on Friday at the Ksar Char Bagh hotel during a three-day celebration of their love in Marrakech, according to British Vogue.

Dhowre, a model and former Miss Vancouver, wore a white, off-the shoulder Vera Wang dress for the ceremony before switching into another gown by the same designer – this one, embroidered with pearls, gemstones and lace – later in the night.

Friends and family of the newly-weds kicked off their days of celebration on Thursday with a “colours of souk” themed dinner at the Amanjena. And the festivities will continue on Saturday with an all-white party at the Mandarin Oriental, which will have a festival-like atmosphere.

Idris Elba out and about

TORONTO, ON – SEPTEMBER 10: Actor Idris Elba speaks to the media at the premiere of ‘The Mountain Between Us’ during the 2017 Toronto International Film Festival at Roy Thomson Hall on September 10, 2017 in Toronto, Canada. (Photo by J. Countess/WireImage)

WINDSOR, UNITED KINGDOM – MAY 19: Idris Elba and Sabrina Dhowre arrive at St George’s Chapel at Windsor Castle before the wedding of Prince Harry to Meghan Markle on May 19, 2018 in Windsor, England. (Photo by Gareth Fuller – WPA Pool/Getty Images)

PARK CITY, UT – JANUARY 21: Idris Elba attends as The House of Remy Martin celebrates the APEX Social Club at the WanderLuxxe House with Common and Friends on January 21, 2018 in Park City, Utah. (Photo by Johnny Nunez/Getty Images for Remy Martin)

LONDON, ENGLAND – NOVEMBER 14:Idris Elba attends Ferrari: Under the Skin hosted by Deyan Sudjic and Alice Black, Directors of the Design Museum, and Dylan Jones, Editor of GQ at the Design Museum on November 14, 2017 in London, England. (Photo by Mike Marsland/WireImage)

Kate Winslet and Idris Elba during filming of the Graham Norton Show at the London Studios, to be aired on BBC One on Friday evening. (Photo by Isabel Infantes/PA Images via Getty Images)

TORONTO, ON – SEPTEMBER 10: Actor Idris Elba (R) and guest attend the premiere of ‘The Mountain Between Us’ during the 2017 Toronto International Film Festival at Roy Thomson Hall on September 10, 2017 in Toronto, Canada. (Photo by J. Countess/WireImage)

The couple got engaged in front of a crowd during a screening of Elba’s directorial debut, “Yardie” in February 2018, the same year the 46-year-old DJ was crowned “People’s Sexiest Man Alive.”

They met a year earlier while Elba was filming the thriller flick “The Mountain Between Us,” which tells the story of a man and a woman – played by Kate Winslet – who get stranded in the wilderness following a plane crash.

Still, he said his public proposal “was the most nerve-wracking thing ever.”

“It was a little spontaneous if I’m honest,” Elba told the magazine. “I was at a cast and crew screening and among people I loved. We had all worked so hard for this project so I was like I’m doing it right now, here, today.”

’Game of Thrones’ actor and champion weightlifter admits to steroid use

Brothers connected with ‘attack’ on Jussie Smollett have ‘tremendous regret’ for their involvement: lawyer

Man and woman dead after attempted murder on Niagara River

Elizabeth Wettlaufer wouldn’t have been caught if she hadn’t confessed, inquiry...

DK Shivakumar sent to Tihar Jail after being discharged from Delhi's...

Should Meghan Markle Help Out Her Homeless Brother? – Showbiz Cheat...