The expectations of Venezuelans seem to be surging by the day, which means the risk of falling short is also rising by the day.

The talk of trucks full of aid perched on Venezuela’s border has already brought the hungry to the Colombian city of Cucuta to stand and wait for help. These are the people who already walked out of Venezuela, where long-running economic woes are being exacerbated by a major political fight.

Feed them? Or keep pushing for the trucks to somehow cross the currently impassable border?

The political value of what may soon happen (or not) on that border is almost existential. Nicolas Maduro, who is fighting to hang onto his presidency, has been firm that this country does not need handouts from abroad.

Juan Guaido, the opposition leader who says he will serve as president until new elections are held, knows that if he can convince the military to open the gates then he will have been able to assert authority that has so far eluded him.

Maduro is facing ramped up opposition both in Venezuela and abroad. The U.S. has imposed sanctions and several countries — including Canada — are recognizing Guaido as leader of the oil-rich nation. But Maduro maintains that he is the legitimate president and he still enjoys support from many quarters, including the country’s military. 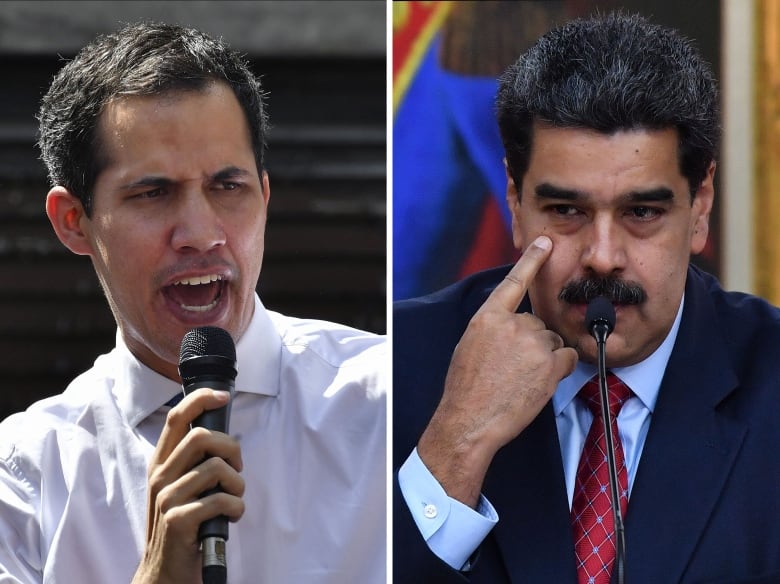 Opposition leader Juan Guaido has said he and his supporters aren’t going to back down as it tries to take on Nicolas Maduro, who says his 2018 election win is legitimate. (Yuri Cortez/AFP/Getty Images)

All of this makes food political. Hope, too.

Many of the hungry seem certain the food will come, that Guaido will prevail and problems will be solved.

The exuberance of their ambitions make another outspoken opposition figure wince. Maria Corina Machado, a politician who backs Guaido, is worried. She says the amount of food needed to feed Venezuelans is so vast that supplies from abroad could never meet the need.

She estimates the trucks currently at the border might be enough to feed one block for a few days. Then what? How long will people wait? Can they even afford to be patient?

“The only way we can stop hunger starvation in our country is getting rid of a mafia system,” she says, taking aim at the government. People need access to open markets and trust in local institutions, she says. 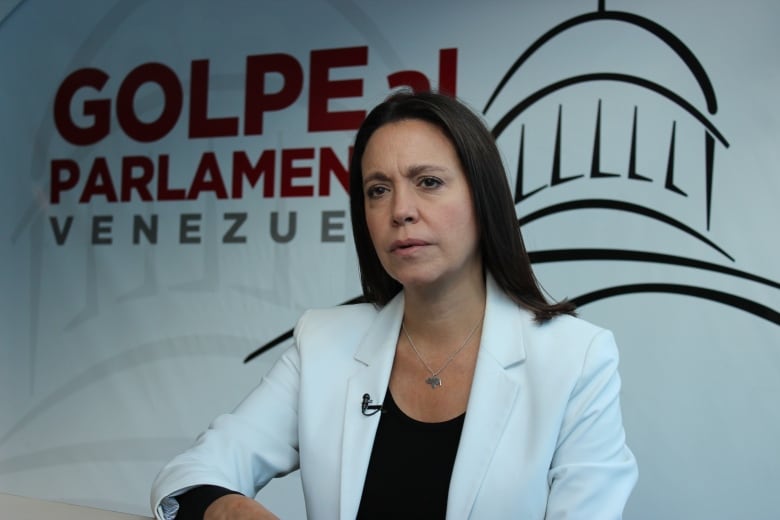 Maria Corina Machado, a member of a centre-right party who backs Guaido, is outspoken in her criticism of Nicolas Maduro’s government. (CBC)

This is bold language from a woman who seems entirely unafraid of being bold in a country where many who oppose the government have been threatened, jailed, exiled or even killed during protests.

Not that she hasn’t been tested before. Machado has served as an elected representative in the National Assembly, and in 2014 she helped lead protests against Maduro. She confidently shares photos of the beatings she has received, and the videos of her confronting the men she says were ordered by the government to follow her constantly.

Watch one encounter between Machado and two men:

Maria Corina Machado confronts men she says were ordered by the Maduro government to follow her 1:16

The threats got so serious she had to send her kids out of country. She hasn’t been able to see them in years.

She told CBC News she’s been banned from leaving the country — and isn’t even allowed to travel by plane within Venezuela.

“Airlines have been warned that if they board me they will lose their license,” she says. “And the last time a friend gave me a ride in a small plane, the plane was taken away from her so I had to do it by roads. And that means I’m followed sometimes even by five or six cars.”

So why talk now? Being open is like wearing a shield, she says.

And she simply has more to say, including that food has always been political in Venezuela and is especially so now.

Who gets help — and where will help come from?

She’s talking about CLAP, a program launched by Maduro that delivers a bag of food every month to those who register for it, for the equivalent of about 10 cents. One bag CBC News saw had three kilograms of rice, four bags of flour, three small bags of pasta and two bottles of cooking oil. What was missing was the milk, sugar, beans and protein the bags used to offer.

Residents of one Caracas neighbourhood said the bags have been getting smaller for months.

But without the bags hunger would be even more dangerous, because for many buying those staples is beyond their means, even if the staples existed in their local markets. 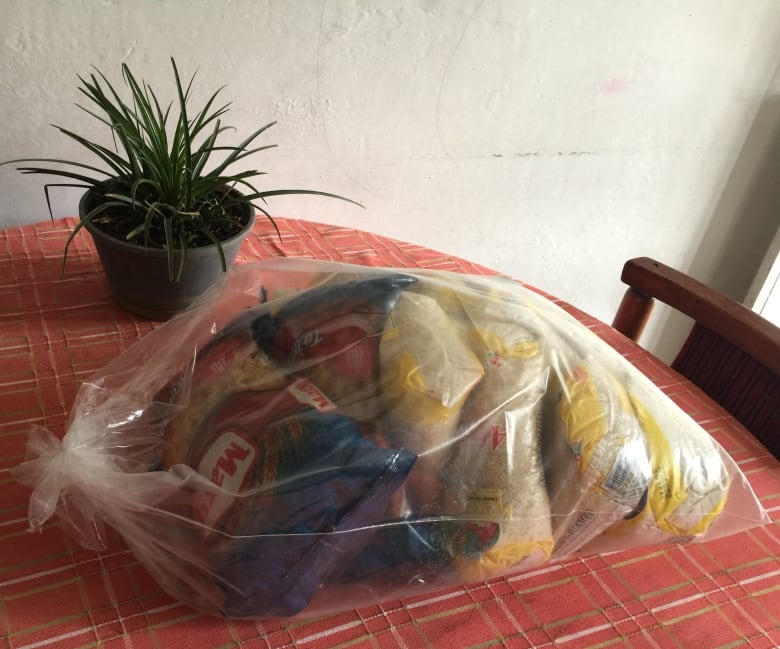 The CLAP bags of food are smaller than they used to be, and contain a smaller variety of food products. (CBC)

Machado, however, says the size of the bags isn’t the only issue. She says people are reporting being threatened with losing access to the bag if they speak critically of the government.

“If they, at a minimum, have just the suspicion that this person or family is not loyal to the regime, then you will stop receiving food,” she says, saying the “cruel manner” the government is handling food support is an example of “how far they can go.”

That seems a hard statement to prove until you meet someone like the woman CBC News encountered a few days after the monthly bags of food were scheduled to arrive.

She was going door to door to alert her neighbours that this month, people were being asked to sign some sort of document showing support of Maduro before receiving their food.

That woman, who spoke to CBC News with the understanding her face and name would not be used out of concern for her safety, said she didn’t support Maduro and refused to sign the documents.

“I feel like they are doing this because they are afraid,” she says. “They know they are already finished. People are no longer supporting Maduro.”

Not signing is a gamble — a bet that she can speak out and still, maybe, get her food.

It is a calculation that soon, something will change. But in a country where outcomes are far from guaranteed, there’s no knowing if help will arrive as the food fights rage on.

Snowfall Warning in effect for parts of Metro Vancouver

Woman in critical condition after being set on fire in Quebec...

Here’s why gas prices are falling, and why drivers shouldn’t get...

Some reprieve for B.C. highways as snowy conditions expected to ease...

Trump says ‘angry majority’ supports him in his fight against impeachment