Hong Kong, China – Using an x-acto knife, Winnie Wat cuts strips of masking tape and pastes them onto the terminal floor of Hong Kong’s international airport, where hundreds of pro-democracy protesters are holding a three-day sit-in.

Referring to a design on her phone case, the secondary school teacher fixes tape in horizontal lines to create a Hong Kong ambigram, a word that changes depending on the orientation. In Chinese, “Hong” one way says “peace” in the other.

“We are all witnesses,” said Wat, who’s in her 30s. Scattered around her, other black-clad protesters cut stickers, assemble posters, paint illustrations and create graphic designs on their computers.

“Everyone is doing what they can do. There is no one [in control],” she said. When it comes to promotional materials for the protests, creation and contribution is completely egalitarian.

“[People] want to say something,” said Wat. “We work together, but we work in our own different way, trying to use our creativity to do something.”

On Friday, Hong Kong’s international airport doubled as a studio. Among the dozens of black-clad protesters participating in the sit-in, many used the terminal floor to design and disseminate art informing travellers of the civil unrest that has roiled the Chinese territory for the past 10 weeks.

For the last three months, anti-government protests have rocked the Asian financial hub over a now-shelved bill that would allow China to extradite criminals to the mainland.

Public furor over the legislation has transformed protests into a wider backlash against increasing Chinese interference into the semi-autonomous region.

At risk are the city’s cherished civil liberties enshrined by the “One Country, Two Systems” framework established when the British returned the city to Chinese rule in 1997.

There is no one central authority or figure that governs the direction of the protests. Organised largely via social media apps, the anti-government movement is largely leaderless.

The same goes for its promotional materials. From creation to dissemination, design production is just as leaderless as the movement itself: anonymous, voluntary, and netizen-driven.

“The protests here, we don’t have any leaders. Everyone is the leader,” said Xavier Li, a 23-year-old recent graduate. “Because we are seeking democracy. That’s why we’re respecting everyone’s opinions.”

Not everyone can or wants to be on the front line of the protests, where police regularly clash with protesters and fire tear gas and rubber bullets to disperse crowds.

Instead, artistically-inclined protesters see their role as keeping the public informed, in Hong Kong and beyond.

Some translate leaflets into multiple languages for an international audience – mostly English and Chinese, but some Korean and Japanese too. Some create graphic images of the protests.

At the airport, another held it up on his computer to display an explainer video using assembled violent footage. Others held up signs with QR codes on posters that link to more informative videos and sites.

“We are just doing what we can do to tell people what’s going on in Hong Kong,” said Wat.

When it comes to protest artwork, no one is assigned. Anyone can contribute and share on social media – mainly Telegram, Airdrop, Instagram, and LIHKG – which is essential for dissemination. 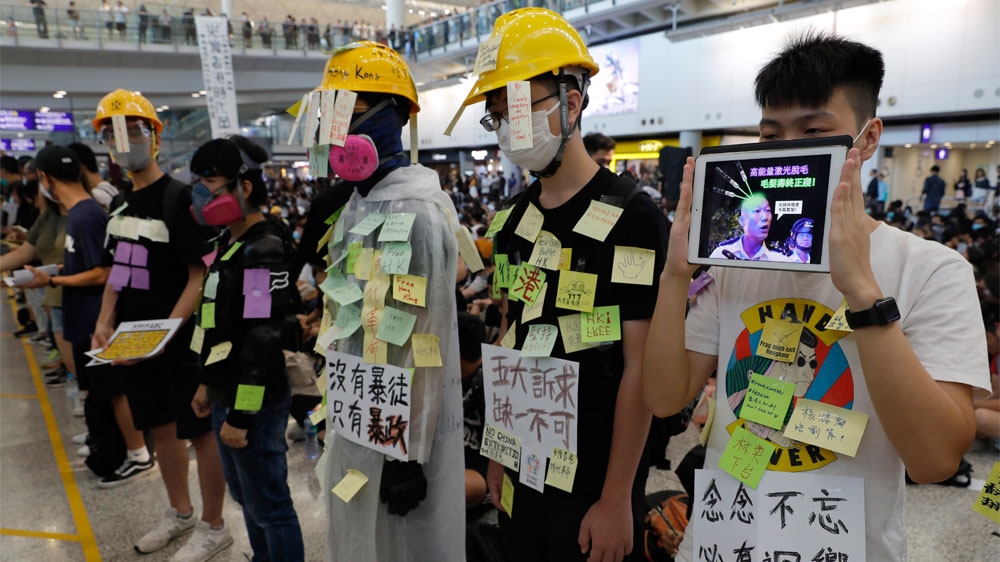 Public anger has swelled in recent weeks over both the escalation of police force against protesters and a mob attack that left 45 people injured.

Police announced last week that at least 400 people have been arrested in connection with the unrest since June 9. Police have fired 1,000 rounds of tear gas and around 160 rubber bullets.

“The government and police have too much authority and power,” Li said. “But I don’t think we can do anything to successfully change their mindset. But if everyone one of us contributes a little bit of their ability, then…it can be a huge power.”

Ahead of the airport protest, the US state department issued a travel advisory on Wednesday, warning visitors to “exercise increased caution” due to political demonstrations that sometimes turn “confrontational” or result in “violent clashes.”

On Thursday, police called on airport protesters to remain “peaceful and law-abiding”.

Airport operations went largely uninterrupted during the kick-off on Friday. The check-in hall was restricted to those with valid boarding passes, and travellers were advised to allow extra travel time.

Travellers arriving in the arrivals wall were greeted by hundreds of protesters brandishing colourful posters and cheering: “Free Hong Kong!”

Dozens distributed pamphlets telling passengers to “Ask me about Hong Kong!” Some just stood in the aisles as human Lennon Walls covered in sticky notes.

“Press and journalists, those people in the front line. Students, protectors. We are promoters,” she said. Promoters print whatever materials they’re drawn to.

Since the protests began in June, Sheryl has printed about $400 worth of promo materials.

“We don’t even know who designs,” she added. “We simply download on the internet. [Artists] never put their name on it.”

Travellers arriving in Hong Kong on Friday had mixed reaction to the commotion.

“Normal persons who live here every day live in [danger], live in this chaos. It’s so bad,” said Haku Bai, 27, an assistant football coach from Beijing traveling from Croatia.

“I don’t actually care [about] government things. I don’t care about who wants something. I only care about… my life and people’s lives.”

Giles Isbell, 51, a history teacher from Britain, said he was “pleasantly surprised by how pleasant and welcoming and informative” the protesters were.

Friday marked the first day of his move to Hong Kong with his family. He’s not “unduly worried” about the unrest, but knows “not to be in the wrong place at the wrong time.”

“I like Hong Kong and China, but [they’re] not the same,” said Eri Tabei, who’s from Osaka, Japan but lives and works in Shanghai.

She has been following Japanese and English news about the protests, but not Chinese news due to heavy censorship.

“[The Chinese] have a bad impression due to the influence of news regulation,” she said. “I support the Hong Kong people. I just want a peaceful solution.” 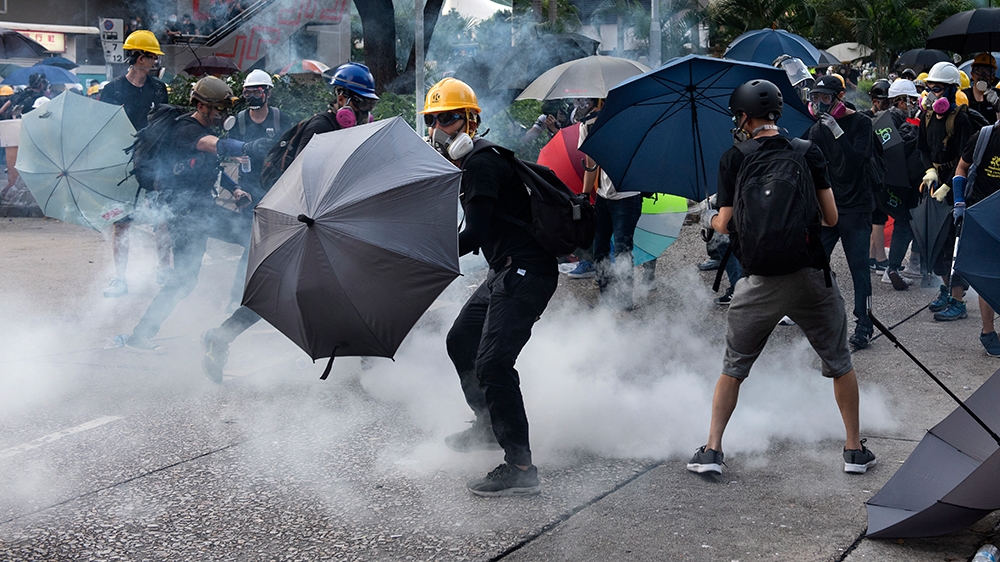 This is not the first time the airport has been a target of the protest grievances. On July 26, flight attendants and airport staff joined protesters for a similar airport sit-in.

On Thursday, the government said tourist arrivals dropped 26 percent at the end of July compared with last year and continue to fall in August.

While Cathay Pacific said it respects the rights of its employees to take part in demonstrations, China has banned any staff involved in protests from mainland routes starting Saturday.

Protesters have five demands, including full withdrawal of the extradition legislation, universal suffrage and retraction of the riot label pinned to recent protests. The government has refused to concede to any.

While thousands are expected to flood the streets this weekend for more protests, the airport will remain occupied through Sunday. Many will take breaks, going home to sleep, eat, and shower.

Before leaving the airport, Winnie will remove her tape art from the floor. “Nothing gets left behind,” she said, adding that she’ll be back again on Saturday.

Filip Forsberg Goes Between The Legs For One Clever Goal –...

US aid lands in Colombia as part of effort to deliver...

My Heart Just Got Bigger After Hearing That Taylor Swift Reads...

Bosnians who refused to spy for Croatia allege being deported