London, United Kingdom – Two years after a tragic fire killed 72 people in the British capital, the victims’ families and survivors are still awaiting justice, while thousands of people across the country fear they live in dangerous homes.

On the night of June 14, 2017, a blaze broke out in the Grenfell residential tower block in the west London borough of Kensington after a refrigerator exploded in one of the apartments.

Of the 72 people who died in what was the deadliest housing fire in the UK in decades, 18 were children.

The rapid spread of the blaze has been blamed on the material used to cover the building’s exterior after renovation works a few years earlier.

Residents and activists marked the day with vigils and a silent walk on Friday evening, while a solidarity march is planned for Saturday.

In the aftermath of the fire, a public inquiry was set up to investigate issues, including the modifications made to the building between 2012 and 2016.

This includes cladding, a method of insulating and improving the appearance of the 24-storey tower’s concrete facade, originally built in the 1970s in the brutalist style popular at the time.

Before the fire, concerns had been raised about the building’s fire-safety measures. 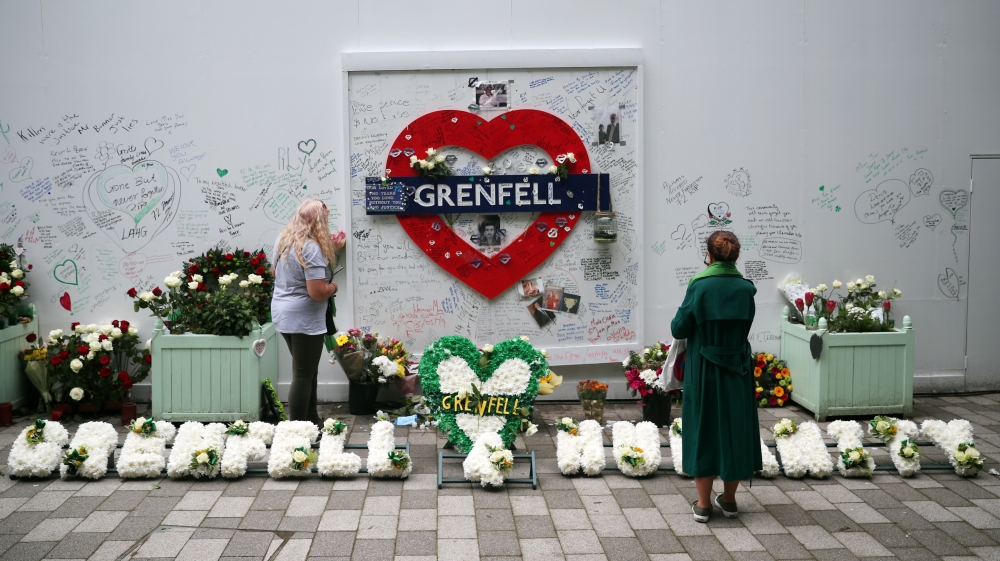 Of the 72 people who died in Grenfell fire, 18 were children [Hannah McKay/Reuters]

Survivors of the Grenfell disaster and the families of the victims have expressed frustration at the slow pace of the inquiry, whose first report, due this spring, will instead be published in October.

The second phase of the report, which was scheduled to start this year, will not begin until 2020.

An update on the inquiry’s official website said the first phase of the report, which aims to reconstruct in detail what happened on the night of the fire, “proved to be a far more complex and time-consuming task than the inquiry had originally anticipated”.

“They all want to have trust in the process,” said Remy Mohamed, a project coordinator at the charity Inquest, which investigates state-related deaths and has taken testimonies from bereaved families.

“The whole point of having a public inquiry is to find out the truth about what happened and to prevent it from ever happening again to anyone else,” Mohamed told Al Jazeera.

“But it’s been two years, and the inquiry hasn’t made any interim recommendations at all,” she said.

“There’s also a concern about the lack of meaningful participation. The families feel they are just an afterthought when they should be at the centre of the process.”

The police are conducting their own, separate investigation, but said the delayed public inquiry should conclude before charges can be filed.

“The road to justice is definitely a long and uncertain one,” Mohamed said.

As part of an approximately $11m refurbishment project, the exterior of the Grenfell tower was fitted with aluminium panels containing a plastic filling.

The foam insulation contained in the panels turned out to be highly flammable, leading to checks on hundreds of towers across the country where the same aluminium composite material (ACM) cladding was used.

The use of the lower-priced panels had been approved by the local council of Kensington and Chelsea as complying with building regulations.

Last year, the government pledged the equivalent of $503m to replace cladding on council and social housing blocks.

At least 470 buildings across the country have been identified as featuring the combustible material.

According to government figures published in May, out of 176 private high-rise residential buildings with unsafe Grenfell-style cladding, 156 had yet to start replacement works, while only 10 had completed it amid disputes about who should pay for the work.

The government announced last month it would release about $250m in funding to replace the ACM cladding on private buildings where owners have failed to do so, arguing the bill was to be footed by the leaseholders who purchased the individual apartments.

But for tens of thousands of people who fear the apartment blocks they live in may turn into death traps, this does not go far enough.

Ritu Saha, a cofounder of the UK Cladding Action campaigning group, believes the money will not go far enough to replace cladding on ACM blocks, according to the costs reported by leaseholders her group has been in touch with across the country.

The government has only recently started testing other types of cladding that may pose a danger.

“There are many blocks across the country which are covered in equally and sometimes even more dangerous combustible cladding, like high-pressure laminate,” Saha told Al Jazeera.

“The government has not made any funds available or at the moment even recognised that this cladding is dangerous,” she said.

Less than a week before the two-year anniversary of the disaster, a privately owned block of flats went up in flames in East London.

Residents had reportedly contacted the property developer, Bellway Homes, with concerns just a months before.

Twenty flats were destroyed in the fire, which appeared to spread across its tinder cladding and caused no casualties.

Residents of her own buildings have set-up what they call “waking watches” to feel safe. They patrol the buildings 24/7, with some residents doing it on a voluntary basis to cut costs.

“There are blocks across the country where residents have received huge bills to fix this. And if they don’t pay, then the buildings’ owners are threatening them saying they are in breach of the terms of their lease and will lose their home,” Saha said.

As cancer mortality declines, gap between rich and poor emerges –...

Why the Royal Family Is Out of Their Mind If They’re...

10 People Hospitalized After Mistakenly Injected with Insulin Instead of the...