Washington Gov. Jay Inslee says his state shares concerns with British Columbia about the Trans Mountain pipeline expansion and will continue to voice its objections any way it can.

Inslee made the comments at a joint news conference in Seattle on Thursday with B.C. Premier John Horgan, who is visiting the state to discuss partnerships on endangered killer whales, clean energy and high-speed rail.

Asked how Washington could influence the pipeline project, Inslee replied: “Every way that we can under Canadian law.

“We’ve done that so far by our Department of Ecology making a vigorous, robust statement of our concerns. I have exercised my rights as governor to speak publicly and vocally about our concerns about this project.”

His concerns include the increased risk of oil spills and the impact of increased vessel traffic and noise on endangered southern resident killer whales off the coast of B.C. and Washington, he said.

“This [project] does not move us toward a clean energy future,” Inslee added. “For both short- and long-term reasons, the state of Washington stands with, I believe, the people of British Columbia expressing concerns about this project.”

The expansion would triple the capacity of the Trans Mountain pipeline, which runs from near Edmonton to a waterfront terminal in Burnaby, B.C.

Canada has purchased the Trans Mountain pipeline and expansion project for $4.5 billion.

The Federal Court of Appeal struck down the project’s approval last August in part because of the National Energy Board’s failure to consider marine shipping impacts. The government ordered the board to conduct a review of this issue and report back by Feb. 22.

Horgan has said that B.C. would use “every tool” in its toolbox to fight the pipeline expansion. He would not explicitly say on Thursday what tools the province has left.

“I’m not answering that question directly in British Columbia, so I would be remiss if I did that today,” he said. “We do have tools available to us.” 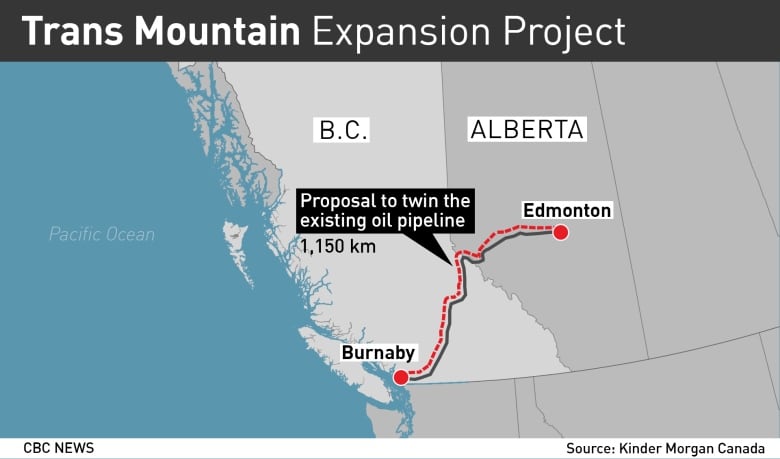 The twinning of the 1,150 kilometre-long Trans Mountain pipeline will nearly triple its capacity to an estimated 890,000 barrels a day and increase traffic off B.C.’s coast from approximately five tankers to 34 tankers a month. (CBC News)

The federal government has jurisdiction over inter-provincial pipelines, Horgan said, but the province has filed a reference case in the B.C. Court of Appeal to see if it has jurisdiction to regulate the transport of oil through its territory.

“The challenge is that Alberta is landlocked and it has a resource that it believes it needs to get to market and they’re struggling with that,” he said. “I appreciate those challenges but my obligation is to protect the interests of British Columbia.”

He added the federal government is in a “difficult” position now that it has purchased the pipeline.

Trudeau has said the expansion is in the best interests of all Canadians and his government has committed $1.5 billion to an ocean protection plan that includes millions for research on B.C. killer whale populations.

Horgan also announced Thursday that B.C. will kick in another $300,000 to help fund a study of a potential high-speed transportation service linking B.C., Washington and Oregon, after contributing the same amount last year.

He said he envisions high-speed rail running from Seattle to B.C.’s Lower Mainland, with a terminus in Surrey that would connect to public transportation infrastructure to take riders to Vancouver’s airport, the city’s downtown core and the Fraser Valley.

Inslee added that a preliminary review has shown the rail link could generate 1.8 million riders in the first few years and Washington has contributed over $3 million to the project.

Coronavirus: What’s happening in Canada and around the world Monday | CBC News

PM to give COVID-19 update as domestic travel restrictions begin

Kevin Durant said he ‘sacrificed a lot of s—’ to play...

We Finally Know Why ‘Game of Thrones’ Season 8 Was Such...

NFL Proves It Has Learned Absolutely Nothing as Kareem Hunt Signs...

Thousands Protest in Tehran Against Regime After It Admits to Shooting...

Openreach sets out plan to provide 227 rural communities with full...