The browser comes with a new set of protections to block pop-ups that could lead to ‘abusive experiences.’

Google officially lifted the curtain on Chrome 71 for Windows, Mac and Linux on Tuesday. The latest browser version touts new security features and a slew of fixes.

Overall, Google issued 43 patches with the security update for Chrome 71. The newest version, 71.0.3578.80, included an array of high severity bug fixes as well. The browser version also claims to block out “abusive experiences” with an update to the existing Chrome ad blocker feature.

“The Chrome team is delighted to announce the promotion of Chrome 71 to the stable channel for Windows, Mac and Linux,” the company said in a Tuesday post. “This will roll out over the coming days/weeks… Chrome 71.0.3578.80 contains a number of fixes and improvements.”

These “harmful experiences” include those “designed to intentionally mislead and trick users into taking action on the web,” said Google in November. For instance, a victim could click on a pop-up and be redirected to a potential malicious page. 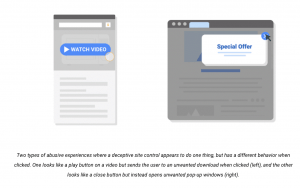 The new feature will motivate site owners to check and see if their websites feature any potential malicious pop-ups.

“Site owners can use the Abusive Experiences Report in their Google Search Console to see if their site contains any of these abusive experiences that need to be corrected or removed,” Vivek Sekhar, product manager said in a post. “Site owners will have a 30 day window to fix experiences flagged by the Report before Chrome removes ads.”

Chrome 71 follows the launch of  Chrome 70 in October.  In addition to 23 security fixes, Chrome 70 also included a new feature that gave users a panel so they could have more control over how browsers behave when they log into their Google accounts.

You Can Still Drink Smoothies on a Low-Carb Diet, but Follow...

‘It gets scary’: Indigenous schools feel heat in restive Mindanao

Golf Pool is an ideal fit on VR headsets – VentureBeat