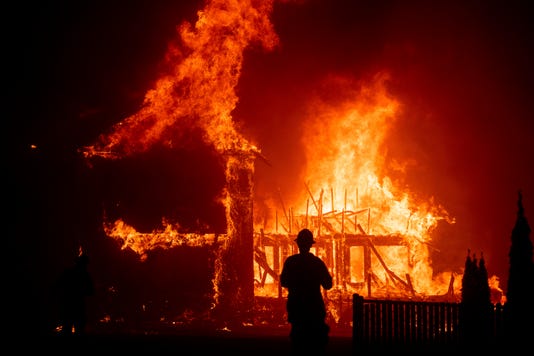 A pair of fast-growing wildfires are raging in California, forcing tens of thousands of residents from their homes and burning some 30,000 acres across the northern and southern parts of the state.

The Camp Fire, about 90 miles north of Sacramento in Butte County, has scorched over 31 square miles in Butte County, Cal Fire said in its 7 p.m. PST update. Officials said 15,000 structures are being threatened as 2,289 fire personnel work against the flames.

In Southern California, the Hill Fire had charred 15 square miles, Cal Fire said Thursday night. Spurred by strong Santa Ana winds, the Hill Fire flared amid red-flag warnings near Thousand Oaks, which was already reeling after a late-night shooting at a dance bar left 13 people dead, including the suspected gunman.

No injuries or structure losses have been reported, the Ventura County Fire Department said during a Thursday night press conference. Officials said they expected the fire to burn to the Pacific Coast Highway and to the Pacific Ocean, potentially reaching 30,000 acres.

More: Battling wildfires year-round is now the norm. How did we get here?

High winds are also to blame for the Camp Fire, which Cal Fire described as “very dangerous” in an afternoon tweet while encouraging people to heed widespread evacuation orders.

Neil Lareau, an assistant professor of atmospheric sciences at the University of Nevada, Reno, said the Camp Fire is moving twice as fast as the Carr Fire, which devastated Shasta County this summer.

“Certainly, there were periods during the Carr Fire where it moved at a faster rate of spread . . . but not for a prolonged period. We have seen a sustained rapid fire growth all day today,” Lareau told the Redding Record Searchlight of the USA TODAY Network.

It wasn’t until two days after it started that the Carr Fire started blowing up.

“The Carr Fire on the day of its rapid expansion into northwest Redding was somewhat wind-driven and moved about six miles in the same amount of time the Camp Fire moved in 11 hours,” Lareau said.

The intense winds driving the Camp Fire are much of the same conditions that fueled the Wine Country fires that ripped through Napa and Sonoma counties in October 2017, Lareau said.

The 40 to 50 mph gusts are not atypical for this time of year in California.

“What’s atypical are the extreme dry fuels for this late in the season,” Lareau said. “We haven’t gotten a good soaking of rain across Northern California.”

A few thousand structures were destroyed in the city of Paradise, about 180 miles northeast of San Francisco, Cal Fire Capt. Scott McLean told the Associated Press on Thursday night.

“Pretty much the community of Paradise is destroyed, it’s that kind of devastation,” McLean said. “The wind that was predicted came and just wiped it out.”

Butte County Sheriff Kory Honea confirmed that people had to abandon their vehicles as they try to flee the fast-moving fire, which was 0 percent contained.

Shary Bernacett said she and her husband tried to get people to leave the mobile home park they manage in Paradise, with just minutes to evacuate as the wildfire approached.

The two “knocked on doors, yelled and screamed” to alert as many of the residents of 53 mobile homes and recreational vehicles as possible to leave the area.

“My husband tried his best to get everybody out. The whole hill’s on fire. God help us!”” Bernacett said.

More: After the fire comes the bill: The rising cost of fighting California blazes

The couple grabbed their dog, jumped in their pickup and drove through flames before getting to safety on Highway 99, she said.

Acting California Gov. Gavin Newsom declared a state of emergency in Butte County, where the fire was burning about 80 acres per minute at one point, according to UCLA climate scientist Daniel Swain. That’s equal to about 60 football fields per minute.

The Hill Fire, which was expected to burn the same area that was destroyed by the Springs Fire in 2013, could threaten up to 5,000 structures, fire officials told the Ventura County Star of the USA TODAY Network.

“The challenge for us is that we’re at the beginning of a significant Santa Ana wind event that will last several days,” a VCFD official said during Thursday night’s press conference.

The risk of fire danger was high throughout the state on Thursday, AccuWeather said.

“The combination of ongoing drought, high winds and very low relative humidity will lead to dangerous conditions for fire weather in parts of California,” the National Weather Service said. 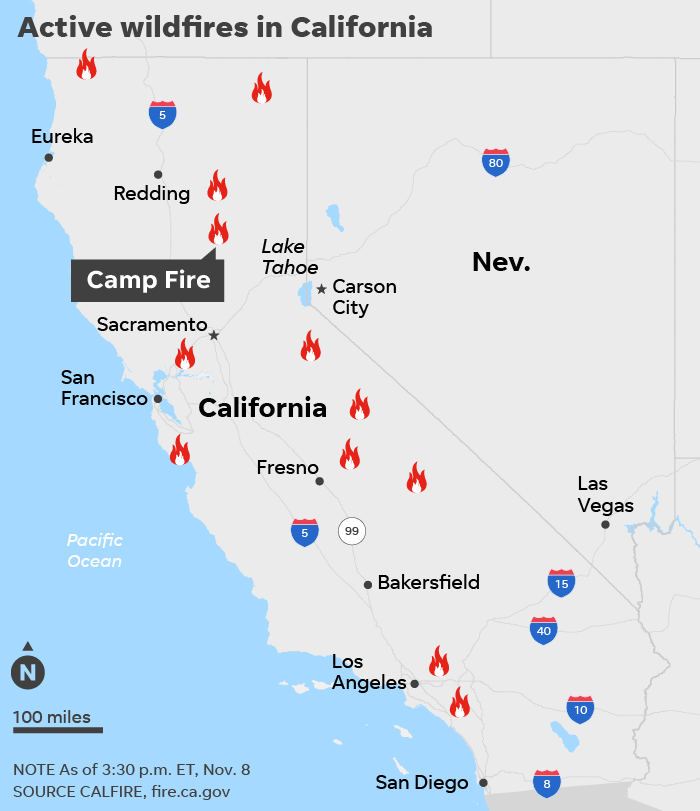 Coronavirus may have leaked from China’s highest biosafety lab next door to market – News-Medical.net

New Hack Unlocks ‘Hundreds of Millions’ of iPhones: What You Need...

If You’re Wondering What That Spiral Pattern Was On “Game Of...

‘Conversations With a Killer’: What Happened to Ted Bundy’s Daughter, Rose...