Zahra struggled in the blue waters of the Gulf of Aden, grasping for the hands of fellow migrants.

Hundreds of men, women and teenagers clambered out of a boat and through the surf, emerging exhausted on the shores of Yemen.

The 20-year-old Ethiopian saw men armed with automatic rifles waiting for them on the beach and she clenched in fear. She had heard migrants’ stories of brutal traffickers, lurking like monsters in a nightmare.

They are known by the Arabic nickname Abdul-Qawi – which means Worshipper of the Strong.

“What will they do to us?” Zahra thought.

She and 300 other Africans had just endured six hours crammed on a wooden smuggling boat to cross the narrow strait between the Red Sea and the gulf. When they landed, the traffickers loaded them into trucks and drove them to ramshackle compounds in the desert outside the coastal village of Ras al-Ara.

There was Zahra’s answer. She was imprisoned for a month in a tin-roofed hut, broiling and hungry, ordered to call home each day to beseech her family to wire $2,000.

She said she did not have a family she could ask for money and pleaded for her freedom.

Instead, her captors raped her. And they raped the 20 other women with her – for weeks, different men all the time.

“They used each of the girls,” she told the Associated Press news agency. “Every night there was rape.”

With its systematic torture, Ras al-Ara is a particular hell on the arduous, 1,400km (900 miles) journey from the Horn of Africa to oil-rich Saudi Arabia. People leave home on sandalled feet with dreams of escaping poverty. They trek through mountains and deserts, sandstorms and 45 degrees Celsius (113 degrees Fahrenheit) temperatures, surviving on crumbs of bread and salty water from ancient wells.

In Djibouti, long lines of people descend single file down mountain slopes to the rocky coastal plain, where many lay eyes on the sea for the first time and eventually board the boats.

Some find their way safely across war-torn Yemen to Saudi Arabia, only to be caught and tossed back over the border. The lucky ones make it into the kingdom and earn their livings as servants and labourers.

But others are stranded in Yemen’s nightmare – in some measure because Europe has been shutting its doors, outsourcing people to other countries.

More than 150,000 people landed in Yemen in 2018, a 50 percent increase from the year before, according to the International Organization for Migration (IOM).

This year, more than 107,000 had arrived by the end of September, along with perhaps tens of thousands more the IOM was unable to track – or who were buried in graves along the trail.

The European Union has provided funding to Ethiopia to crack down on people smugglers and intensified border controls. Arrests of known brokers have prompted people to turn to unreliable traffickers, taking more dangerous paths and increasing the risk of abuses.

Many of those people end up in Ras al-Ara.

The AP spoke to more than two dozen Ethiopians who survived torture there. Nearly all reported witnessing deaths, and one man died of starvation hours after the AP saw him.

The imprisonment and torture are largely ignored by Yemeni authorities. The AP saw trucks full of people passing unhindered through military checkpoints as they went from the beaches to drop their human cargo at each desert compound, known in Arabic as a “hosh”.

“The traffickers move freely, in public, giving bribes at the checkpoints,” said Mohammed Said, a former coastguard officer who now runs a petrol station in the centre of town.

The smugglers are well-known Yemenis and Ethiopians. One of them, a Yemeni named Mohammed al-Usili, runs more than 20 hosh and drives a red Nissan four-wheel drive through town.

Others belong to Sabaha, one of the biggest tribes in southern Yemen, some of whom are notorious for their involvement in illicit businesses. Yemenis call the Sabaha “bandits” who have no political loyalties to any of the warring parties. 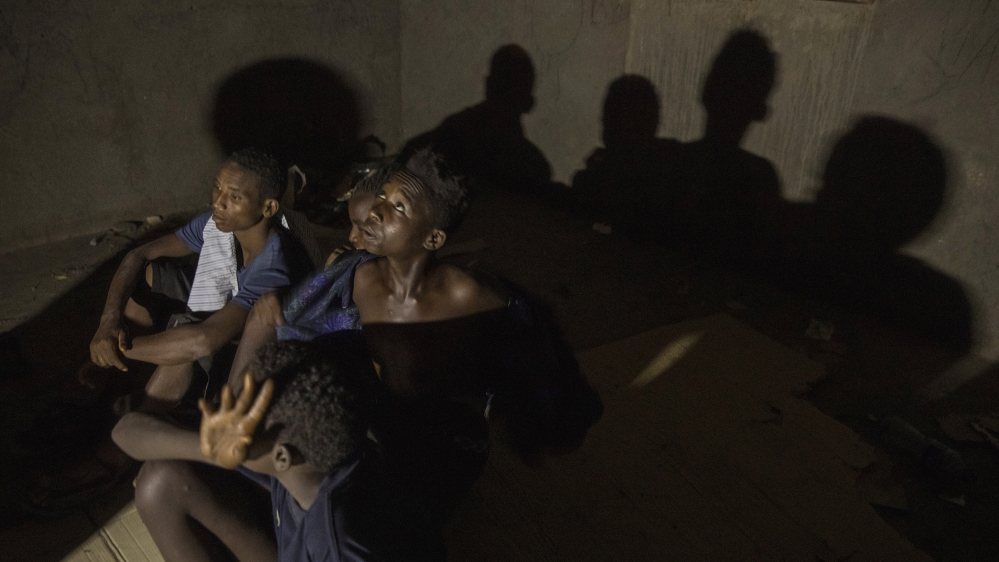 From time to time, Ethiopians escape or are released and stagger out of the desert into town.

Eman Idrees, 27, and her husband were held for eight months by an Ethiopian smuggler. She recalled the savage beatings they endured, which left a scar on her shoulder. The smuggler received $700 to take her to Saudi Arabia, but would not let her go because “he wanted me”.

Several young men showed deep gashes in their arms from ropes that had bound them. One who had bruises from being lashed with a cable said the women imprisoned in the hosh with him were all raped and three men had died.

Another, Ibrahim Hassan, trembled as he showed how he was tied up in like a ball, arms behind his back, knees bound against his chest. The 24-year-old said he was bound like that non-stop for 11 days and was frequently beaten.

Hassan said he was freed after his father went door to door in their hometown to borrow the $2,600 that the smugglers had demanded.

“My family is extremely poor,” Hassan said, breaking down in tears. “My father is a farmer and I have five siblings.”

At Ras al-Ara hospital, four men who looked like living skeletons sat on the floor, picking rice from a bowl with thin fingers. Their bones protruded from their backs, their rib cages stood out sharply. With no fat on their bodies, they sat on rolled-up cloth because it was too painful to sit directly on bones. They had been imprisoned by traffickers for months, fed once a day with scraps of bread and a sip of water, they said.

Abdu Yassin, 23, said he had agreed with smugglers in Ethiopia to pay about $600 for the entire trip through Yemen to the Saudi border. But when he landed at Ras al-Ara, he was brought to a compound with 71 others, and the traffickers demanded $1,600.

He cried as he described how he was held for five months. He showed the marks from lashings on his back, the scars on his legs where they pressed hot steel brands into his skin.

His finger was crooked after they smashed it with a rock, he said. One day, they tied his legs and dangled him upside down, “like a slaughtered sheep”.

But the worst was starvation.

“From hunger, my knees can’t carry my body,” he said. “I haven’t changed my clothes for six months. I haven’t washed. I have nothing.” 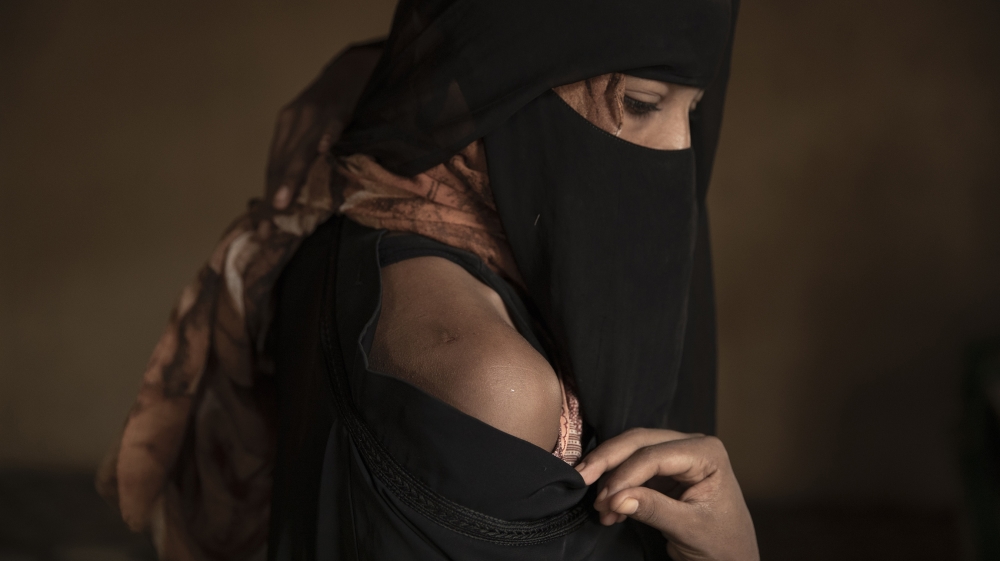 In this July 21, 2019 photo, Ethiopian migrant Eman Idrees shows her shoulder with a wound from torture after being held and abused for eight months in a desert compound known in Arabic as a ‘hosh’, run by an Ethiopian smuggler in Ras al-Ara, Lahj, Yemen [File: Nariman El-Mofty/AP Photo]

All eyes in Berlin as world powers set for Libya talks

Simpsons actor Hank Azaria will not voice Apu after controversy

Could Brexit put an end to peace in Northern Ireland?

Sex work is legal here. But only if you register with...