Bogota, Colombia – Hundreds of demonstrators took to the streets in the Colombian capital on Saturday as anti-government protests continued for a third day amid rising fear and violence.

The protests began on Thursday when more than 200,000 people took part in what they called a national strike over a number of grievances, including possible economic reforms by the government of right-wing President Ivan Duque.

While the majority of the protesters continue to demonstrate peacefully, banging kitchenware in the streets in a traditional Latin American protest called a “cacerolazo” [casseroles], some small factions have clashed with security forces in Bogota and country-wide.

Three protesters have died in the unrest so far, while a car bomb in the western region of Cauca killed at least three police and left 10 others wounded on Friday.

As the protests continued for a third day on Saturday, the growing violence combined with overnight curfews in Cali and Bogota – the first in more than 40 years – has left many Colombians with a looming feeling of terror.

“Imagine you’re in your bed, calm and thinking nothing will happen, then you begin hearing the helicopters, the military trucks passing through the streets, you hear the alarms of the buildings,” said 20-year-old protester Oscar Javier Diaz. “You hear weapons, next screams, shots from the security forces.”

Javier Diaz, was among a group of peaceful protesters gathered in Bogota’s national park on Saturday, wearing a rainbow indigenous handkerchief tied around his neck.  He, like many of the protesters, was calling for an end to the killing of indigenous and social leaders, corruption, possible economic reforms and the surge of violence in Colombia’s rural zones. 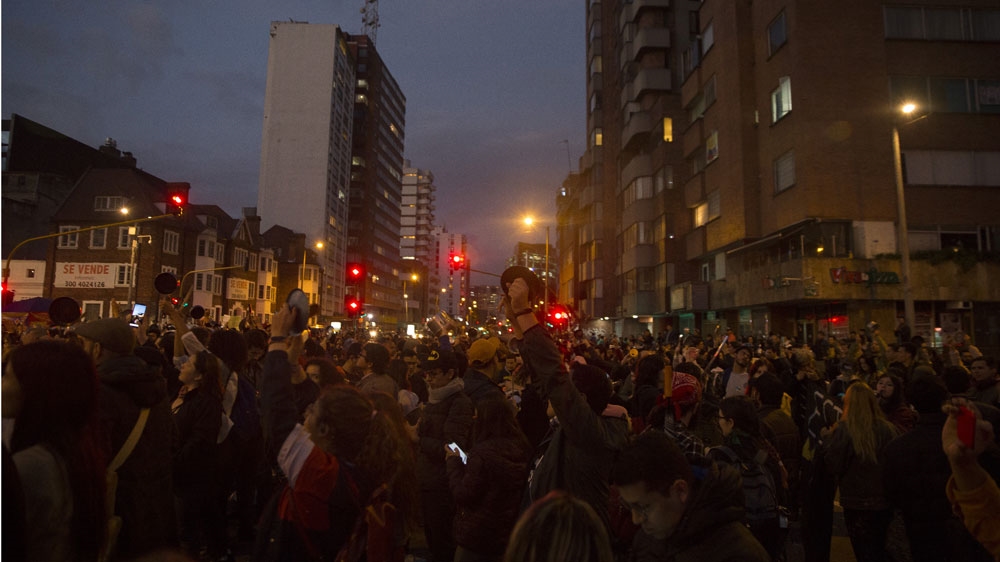 The young Colombian said he and a group of neighbours stayed up all night outside their apartment complexes with sticks to ensure that no one came to rob or vandalise their buildings.

“This fear that we survived last night,” Javier Diaz said. “It’s something that rural zones have had to live with for a long time. I think the city is finally starting to understand the fear and sadness that war creates.”

Minutes after telling Al Jazeera he hoped to continue protesting peacefully in the “cacerolazos”, he and hundreds of other peaceful protesters were charged and tear-gassed by police in riot gear.

Later on Saturday afternoon, a young protester was critically wounded. The incident spurred outrage among protesters, who that night lit candles and gathered where the incident took place.

The protests in Colombia come as people in other Latin American countries – Chile, Bolivia,  Ecuador , Guatemala, Haiti – have taken to the streets in anti-government demonstrations.

In deploying large numbers of security forces, the Duque government has responded similarly to other Latin American governments facing large protests. In Chile, where protests have continued for more than a month, a crackdown by security forces fuelled the anger of demonstrators demanding reforms.

As clashes between police and groups of violent protesters seem to feed a circle of violence in the country’s capital, Sergio Guzman, director of Colombia Risk Analysis, said Duque’s response to the protests in the coming days could be a turning point for the marches.

On Saturday evening, Duque announced the start of a “national conversation” in response to the ongoing unrest.

“Tomorrow, with Mayors and Governors elected from all over the country we will start the National Conversation,” he said on Twitter.

He previously said he would meet with protest leaders, including heads of unions, in order to begin a conversation about protester demands.

Guzman said it was critical that Duque urgently tackles the rising violence and implements reforms.

But the leader’s call for talks did little to calm riots across the country, and was met with doubts by many demonstrators like Camila Pinilla, who said she was concerned the protesters’ demands were still falling on deaf ears.

“We hope that what they’re saying is the truth,” Pinilla said. “We hope that by Monday, they put forth what we’re asking for. If no, we’re going to continue these marches. The idea is to keep going, whether that be a day, two days, three days or a week until we are heard.”

Yemen’s Houthis to not ‘stop fighting’ after ceasefire

‘We don’t want to depend on husbands, we want to help...

Here’s The Real Truth About That Confusing Red Meat Study –...