Goldy’s views have been described as far-right white nationalist. She was fired from Rebel Media in 2017 after taking part in a neo-Nazi podcast.

“Individuals and organizations who spread hate, attack, or call for the exclusion of others on the basis of who they are have no place on Facebook. That’s why we have a policy on dangerous individuals and organizations, which states that we do not allow those who are engaged in offline ‘organized hate’ to have a presence on Facebook,” reads a statement from Facebook.

“The individuals and organizations we have banned today violate this policy, and they will no longer be allowed a presence on our services. Our work against organized hate is ongoing and we will continue to review individuals, pages, groups and content against our community standards.”

Facebook said the Canadian Nationalist Front, Aryan Strikeforce, Wolves of Odin and Soldiers of Odin (also known as Canadian Infidels) have also been banned from “having any further presence” on its services. The company said it also intends to remove content affiliated with those banned, including linked pages and groups.

The pages began to disappear from Facebook this morning.

Facebook works with various academics and organizations around the world to determine which ones are hate organizations.

“Our enemies are weak and terrified. They forget most revolutions were waged before social media!” she tweeted.

CBC News contacted Twitter to ask if Goldy would be banned from that platform but received a terse “no comment” in reply.

Last week, Goldy tweeted that she had been barred from the Airbnb home-sharing service. 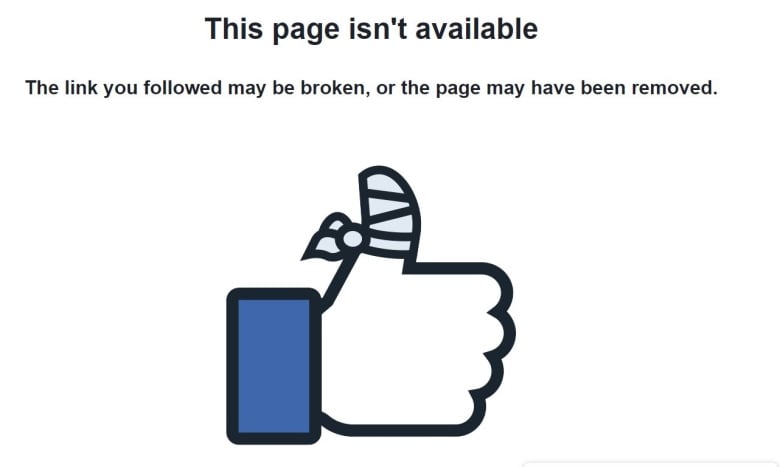 A search for Kevin Goudreau on Facebook turns up this image. (CBC News)

Edmonton-based freelance journalist Bashir Mohamed, who writes about white supremacy and the Ku Klux Klan in Canada, applauds Facebook’s move but said he wishes it had happened sooner.

“I would have hoped that it would have been done sooner,” Bashir said. “There’s this idea that she became white supremacist in 2017 after Charlottesville, but if you look at her articles it goes back to 2015 where she is actually talking about white-supremacist ideals like white genocide.”

‘No place’ for divisive statements

Minister of Democratic Institutions Karina Gould said racist and violent views should not be tolerated on social media platforms.

“There is no place in Canada for these kinds of divisive societal statements,” she said. “We are pleased that Facebook has made this decision and would hope that other platforms would look to Facebook’s actions.”

“We think that’s progress, but it’s inconsistent. Without any set of guidelines or rules, then we’re allowing self-regulation,” he said. “We’re allowing Facebook and Google to decide when and where and who.”

BC NDP MP Nathan Cullen comments on Facebook’s decision to ban certain individuals and organizations from its platform for violating its terms of service. 1:12

The Canadian Anti-Hate Network called the targets of today’s bans the “tip of the iceberg.” It said that groups which have made even worse comments remain on Facebook.

“Next we are calling on Facebook to remove the Yellow Vests Canada page, which shares hundreds of examples of overt racism, death threats and white nationalist sentiment,” reads a statement from executive director Evan Balgord. “We are still calling on government to enforce the Canadian Human Rights Act against social media companies, which are providing their services in a discriminatory manner.”

Asked whether it would be looking at banning other groups, such as Yellow Vests Canada, Facebook told CBC the work of determining whether posted content violates the platform’s policy on extremism is “ongoing.”

Last month, the Liberal government announced a special fund for research into right-wing extremism. Through it, the University of Ontario Institute of Technology got a three-year grant of $366,985 to conduct interviews with law enforcement, community anti-hate activists and former and current extremists to gain a better understanding of the beliefs, motivations and activities of extremists.

Under the plan, a new watchdog will be appointed to establish a new regulatory regime to stop revenge pornography, hate crimes, harassment and the sale of illegal goods, as well as other “harmful behaviour” such as cyber-bullying and spreading fake news.

Micro-plastics are entering the human body and are dangerous to human...

Man rushed to hospital with serious injuries after being struck on...

Persimmon chief to step down despite company’s £1bn profit – The...